A rumour that local schools are injecting students with a serum that turns children gay is the latest controversy on the Burnaby campaign trail.
Oct 31, 2014 4:41 PM By: Jacob Zinn 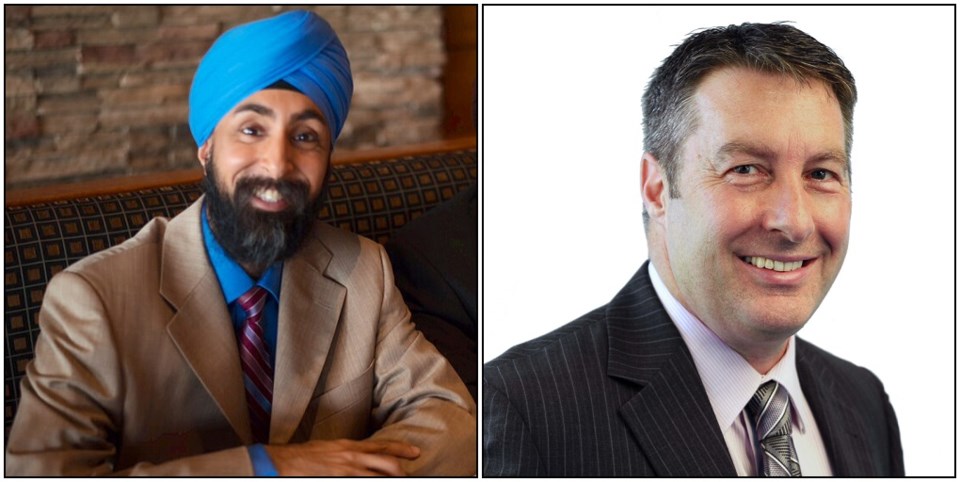 BCA school trustee Harman Pandher and Burnaby First mayoral candidate Daren Hancott are voicing concerns with a rumour going around certain communities that the school district is injecting students with a serum that changes sexual preference.

A rumour that local schools are injecting students with a serum that turns children gay is the latest controversy on the Burnaby campaign trail.

BCA school trustee Harman Pandher said he first heard about the rumour while door-knocking a week or two ago.

“I had an encounter with one family, and I heard that others had some information come their way as well,” said Pandher, who noted residents were told about the serum through flyers and at the Bonsor Recreation Centre. “It was pretty unbelievable that a rumour like that would be out there.

“It’s pretty outrageous, in this day and age, these types of things are being believed.”

The rumour was purportedly spread by a volunteer with the opposition, Burnaby First, but the coalition’s mayoral candidate, Daren Hancott, said he was unaware of it until he was reached by media for comment.

“I just sent out a note to everybody saying, ‘What is this?’ And I got no responses,” he told the NOW. “I don’t know where it’s coming from.”

According to Pandher, the rumour is confined to the Mandarin-speaking community, and Burnaby’s new immigrants are being targeted.

“We’re not hearing this in the mainstream media, we’re not hearing this at all candidates events or on party websites – it’s being done sneakily and it’s unfortunate,” he said. “It’s a type of fearmongering is what it is, and playing on people’s insecurities, but it really has no place in my Burnaby.”

Pandher said he’s not sure who’s spreading the rumour, but added it seemed like it was an orchestrated campaign.

“I don’t know how effective this type of smear campaign is. I think our voters are smarter than that, but there are people who are new to Canada and might not be that familiar with issues and the type of diversity we have in our community.”

Hancott, on the other hand, said he has no idea who started the rumour, and hasn’t ruled out that it could be an act of political sabotage.

“With two and a half weeks to go, this is the first I’ve heard of something like this and I hope this is not sabotage,” he said. “I find it just so unbelievable that people would spend time on this.

The rumour echoes back to the controversy that surrounded Policy 5.45, an anti-homophobia policy developed by the school district prior to the 2011 municipal election.

Parents’ Voice, a political group formed to oppose the policy, feared the policy would infringe on their rights to educate their children about sexual identification. The group included current BFC candidates Charter Lau, Heather Leung and Helen Ward.

When asked if he thinks the rumour is related to the Parents’ Voice group or Policy 5.45, Pandher said he didn’t want to point fingers, but noted it would be hard not to link it to them.

“We thought this issue was dead three years ago and it’s rearing its ugly head again,” he said.

But Hancott said the policy never came up during the coalition’s vetting process with candidates.

“We told everybody who came to our group and who were vetted that you can’t bring a single issue, whether it’s jobs or pollution – any single issue doesn’t belong in a party. People have to leave their issue at the door.”

Hancott said sexual preference is not an election issue and that every child “deserves respect and equal treatment in the school system so they can reach their full potential.”

Similarly, Pandher prided the school district and the city for its inclusiveness, and hoped that sexual preference would not become a point of contention again.

“There’s no such thing as some sort of magic potion that’ll turn someone gay or change someone’s identity,” said Pander. “You are who you are and we need to just accept people for that.”