The results are in for the NOW's election survey, and readers voted the Kinder Morgan pipeline expansion as the number 1 issue in Burnaby.
The online survey was conducted from Oct. 1 to 14, and 100 people responded. Readers were asked to select the top three issues (from a list the NOW compiled) that mattered most in this election.
The Kinder Morgan pipeline expansion garnered the most votes at 50. Affordable housing was a close second with 46 votes, and homelessness ranked third with 38 votes.
Crime, immigration and arts and sports programs ranked the lowest with six, 11 and 12 votes respectively. 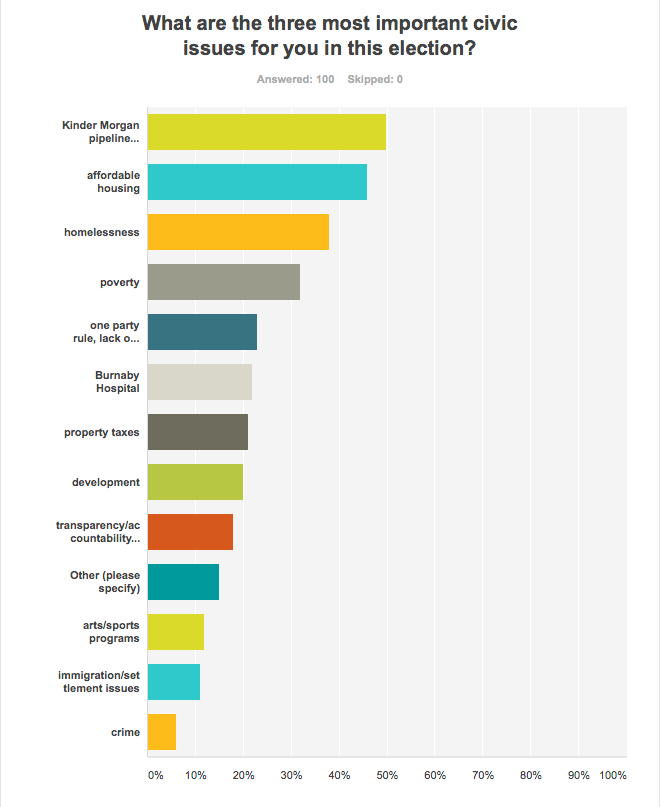 
Readers also had the option of adding their own concerns, which included seniors' care and housing, property taxes for businesses and homeowners, increased tanker traffic on the Burrard Inlet, transportation planning and traffic problems.
The NOW used Survey Monkey, a free online tool, to conduct the poll using self-selecting respondents. The NOW also noted that preliminary results showed Burnaby Hospital among the top three concerns, but that changed after the Burnaby Task Force on Homelessness circulated the survey link amongst their supporters, which likely altered the results. 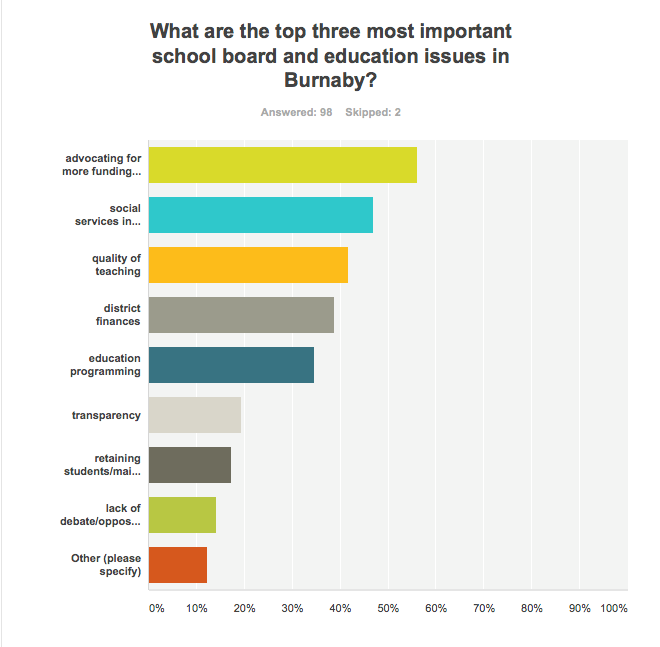 Readers ranked provincial funding as the top education election issue when asked to select the top three education issues of most concern.
Readers ranked advocating for more provincial funding as the top education issue in Burnaby, with 55 votes. The second top-ranked concern was social services in schools (for example, hot lunch programs), with 46 votes. The third-ranked issue was quality of teaching, with 41 votes.
Readers also had the opportunity to voice their own concerns, beyond those listed on the survey. Issues included classroom composition, smaller class sizes, resources for the homeless, respect for teachers and funding for fine arts, special needs students and libraries.

As a bonus question, readers were asked to tell us why they vote. Those answers will be shared on the BurnabyNOW_news Twitter account leading up to the election, with the hashtags #whyIvote and #readersurvey.