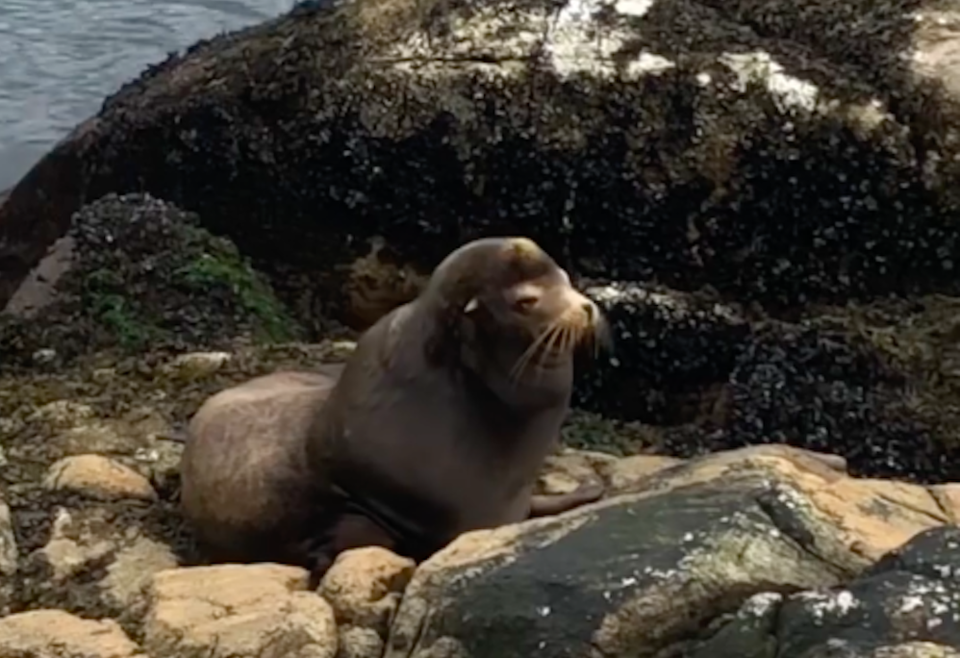 A Vancouver man spotted a California sea lion while he was hanging out on the North Shore last week.Photo via mileswalker9th / Instagram

A Vancouver man spotted an adorable marine mammal while he was hanging out on the North Shore last week.

And while the aquatic creature might look like one of B.C.'s commonly spotted Steller sea lions, this one has some notable differences.

According to Ocean Wise, California sea lions are dark brown and almost black when wet. Males have a large, robust body, thick neck, and no mane; they also have a pronounced forehead (sagittal crest) crowned with a patch of light fur.

The California critters also have a "dog-like head with a long, narrow snout, and small external ear flaps." Their large hairless flippers support their bodies for "walking."

Miles Walker took to Instagram to share a video of the hefty pinniped on some rocks near Lighthouse Park. The inquisitive creature looks around several times before leaping into the ocean.

"We must have spent close to an hour watching him just flop around before taking off," writes Walker in his post.

Walker tells Vancouver Is Awesome that he hasn't spotted one on the shore since he moved here in 1983.

Lindsaye Akhurst, Manager at the Marine Mammal Rescue Centre, tells V.I.A. that the province sees an increased number of California sea lions at this time of year.

"It is a California sea lion – what a handsome dude!" she writes. "We do see an increased number of [California sea lions] in B.C. especially this time of year with the herring spawn that is currently underway."

Akhurst adds that the California sea lions also follow a few of the salmon runs at different times of the year, such as the chum in Cowichan Bay in October and November.

Interestingly, nearly all of the California sea lions that visit B.C. are male.

In contrast, Akhurst says Stellar sea lions are generally here year-round. "There are a few rookeries that include males, females and their offspring. Some [California sea lions] do stay here year-round but not many."

What should you do if you spot a sea lion on the seashore?

"The best thing to do if [you] are seeing one of these animals is to keep your distance and call us if [you] are concerned with the health of the animal."

If you spot a marine mammal in distress you should call the Marine Mammal Rescue Centre at 604-258-SEAL (7325). You can also call the Department of Fisheries and Oceans BC Marine Mammal Response Network (Observe, Record, Report) line at 1-800-465-4336. Don't try to help the animal yourself.

While observing from a distance, try to collect the following information:

Does the animal have any visible wounds or swellings?
Is the animal breathing? Is it breathing through its nose or its mouth? Does the breathing sound congested or laboured?

Don't try to coax, pull or push an animal back into the water. Marine mammals are wild animals, and approaching too closely can cause them undue stress. If they feel threatened, they may bite.

It's important to keep pets away. Dogs may inflict wounds on marine mammals, and there's a risk of disease transmission between the species.

By taking photos and sending them to the Marine Mammal Rescue Centre, trained rescuers will assess the situation and determine whether intervention is necessary.

Science World opening an immersive exhibit that lets you 'journey into the Arctic'
Jan 28, 2021 5:59 PM
Comments