Amazon to expand, with 2,000 new jobs in Metro Vancouver

E-commerce giant to establish new facilities in five Lower Mainland communities
May 7, 2021 9:05 AM By: Glen Korstrom 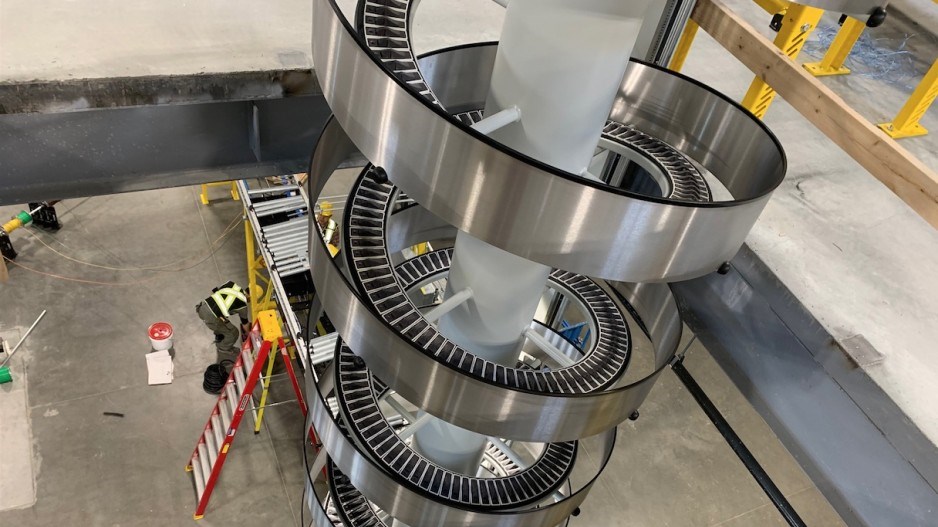 A spiral conveyor belt for parcels is put in place at a distribution centre in Tsawwassen before that site opened in 2019.Glen Korstrom

Amazon.com Inc. plans to hire more than 2,000 employees in Metro Vancouver to staff five new buildings. Sites are to be in Vancouver, Pitt Meadows, Delta, the Township of Langley and the City of Langley, the e-commerce giant announced May 7.

Amazon did not provide exact addresses.

The retailer opened a 200-employee delivery station in Langley Township in mid-February. The other four sites are slated to open later in 2021.

The future, 450,000-square-foot Vancouver facility is described as being an advanced robotics fulfilment centre at the Port of Vancouver, which will create 1,000 jobs.

A new sorting centre is set to create 500 new jobs in the City of Langley.

Delivery stations in Pitt Meadows and in Delta are each expected to create several hundred jobs, according to Amazon.

Amazon said it employs 5,500 full- and part-time workers in B.C., which is its largest employment hub outside its home base of Washington State.

The company in 2019 said that it planned to triple its B.C. workforce, which then was more than 2,300 people.

Amazon said that it has invested more than $3 billion in B.C. in the past decade.

"This expansion by Amazon is an endorsement that B.C. is a desirable place for a global company to make a long-term commitment," said B.C. Minister of Jobs, Economic Recovery and Innovation Ravi Kahlon.

Amazon also employs more than 1,500 office workers in downtown Vancouver and those workers have been in a shifting series of sites.

One subleased space had been at Bentall Centre.

Other sites with Amazon office workers include Telus Garden, at 510 West Georgia Street; the Exchange, at 475 Howe Street; and an Oxford Properties building at 402 Dunsmuir Street.

Amazon's largest office hub in downtown Vancouver is set to be at the Post building, at 349 West Georgia Street, when construction on that building is complete – likely in 2023.

Amazon has been incrementally leasing more space in that complex, and at last count intended to lease 1.1 million square feet at the Post.

"From an employment standpoint, the expansion speaks to Amazon's success as a retailer, and as a facilitator of other businesses that are selling on the Amazon platform."

Patterson said Amazon's growth, and the shift to spending online will not necessarily cause bricks-and-mortar retail workers to lose jobs.

He noted that the Seattle-based giant does not have a huge presence in selling fashions, and that despite it owning Whole Foods, does not have a strong e-commerce distribution network for groceries.

"It's surprising," he said. "It really is, to be honest. You would think that Amazon would be the best e-commerce grocery store in the world."

Walmart is the anchor tenant at a 74,000-square-foot warehouse in Burnaby, which SPUD subsidiary Food-X Urban Delivery Inc. operates.