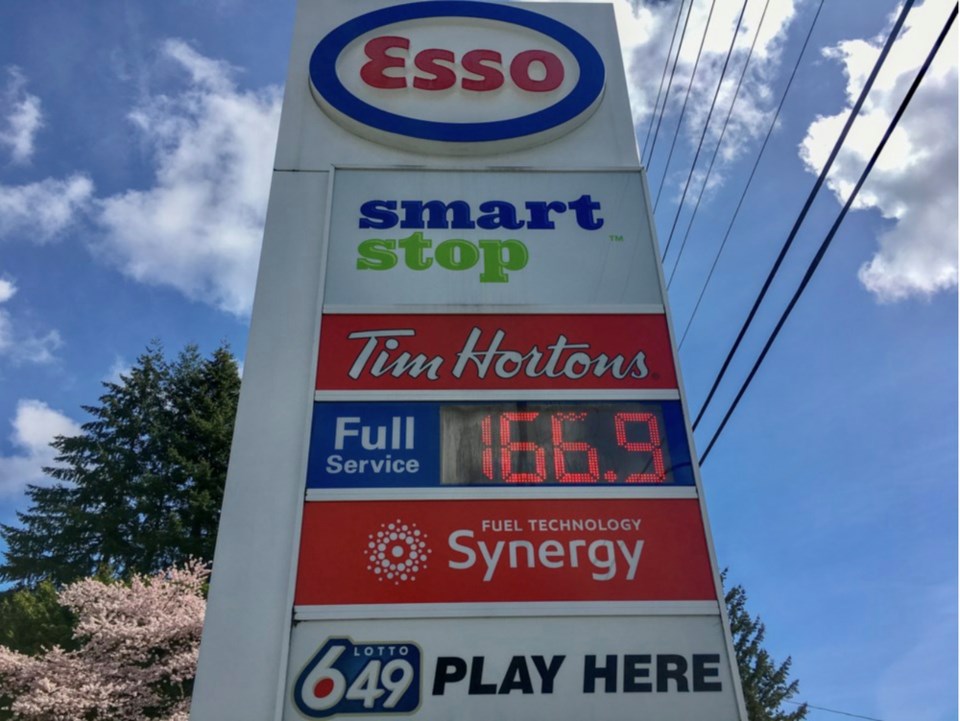 On April 4, 2019, an Esso off Austin Avenue in Coquitlam had the short title of most expensive gas in the province. Gas prices would later surge past $1.70 per litre, and experts are divided on whether that will occur again this year. FILE PHOTO/TRI-CITY NEWS

Gas prices across the Tri-Cities soared to over $1.50 a litre Tuesday amid geopolitical posturing by some of the world’s biggest oil producers.

But while at a Shell gas station in Port Coquitlam off Lougheed Highway prices reached 152.9 cents, one UBC professor of energy economics said all signs point to prices levelling off.

Locally, refineries in Burnaby, Prince George and Washington state have not come up against any production problems as when prices hovered around $1.70 a litre two years ago, leading UBC energy economics professor Werner Antweiler to believe local prices should stabilize soon.

“The prices are going up here completely parallel to the oil markets,” he said.

Others are less optimistic. Dan McTeague of Canadians for Affordable Energy predicts Vancouver gasoline prices won't begin to stabilize until they hit $1.70 this summer.

CAN’T WE GET CHEAP FUEL FROM ALBERTA?

Crude oil prices get sold on a global market under a variety of names and qualities, from West Texas Intermediate to Brent, an oil index from the North Sea.

The heavy crude coming out of Alberta goes by Western Canadian Select, a product Antweiler describes as an “endangered species of oil” after dropping to $5 a barrel during the pandemic slump and cutting profit margins.

But because oil works on an international market and a tanker can easily pull up anchor and sail across an ocean to the shores of a better paying customer, all the oil indexes are “pretty much moving in lockstep,” according to Antweiler.

WHY DOES METRO VANCOUVER PAY SO MUCH?

At current market prices, crude oil arrives at the refinery in Burnaby at the cost of between 40 and 45 cents per litre.

From there, Antweiler’s research finds the margin going to refineries accounts for another 40 cents per litre — that includes the cost of refining crude into gasoline, transportation and any mark-up.

When gas stations turn around and sell it to a driver at the pump, they tag a median 8 to 9 cents to final price at the pump, though over the last year actual retail margins have varied widely in B.C. from 4% to over 14%. This mark-up pays for the land gas stations operate on, wages to employees and any profit margin.

To complicate gas prices even more, prices can vary from station to station as they compete with customers and pursue their own pricing strategy. That’s why, said Antweiler, you’ll find clusters of gas stations often have lower prices than a lone station off the highway.

Then there are the taxes. Here’s how they break down for Metro Vancouver drivers:

Add another 5% GST on top of everything, and that adds up to just under 53 cents in taxes for people living in Metro Vancouver.

When the price per litre ticks up, it’s usually the result of the rising cost of crude oil or a bottleneck at a local refinery, said Antweiler.

However, according to a BC Utilities Commission inquiry into gasoline and diesel prices in the province following the 2019 surge in prices, the rising cost is not always so easily explained.

While the inquiry found no evidence of collusion or cartel-like behaviour among retail operators, it stated an “invisible hand” may be nudging prices upward. Between 2015 and 2019, the panel found “a significant unexplained difference in price” between Washington state and B.C., despite the southern part of the province being part of the same market.

The 13-cent-per-litre difference in southern B.C. meant British Columbian consumers paid approximately $490 million per year more than they otherwise would have paid.

“In addition,” noted the report. “We find that retail margins are higher that the rest of Canada with no clear explanation for the difference.”

ARE WE AT AN ELECTRIC TIPPING POINT?

According to Antweiler’s calculations, moving from a gas-powered car to an electric vehicle would cut your fuel bill to a fifth of the cost per kilometre.

For several years, government subsidies have propped up the added cost of electric vehicles as start-ups like Tesla got off the ground.

As technology has progressed, so too have the business calculations of major car manufacturers. In a sign of the coming electric tide, in January, General Motors committed to going fully electric by 2035.

In purely market terms, the tipping point when electric vehicles reach cost parity with gas-powered cars comes when batteries — by far the most expensive part of an electric vehicle — hit $100 per kilowatt-hour of energy (think the amount of energy a 100-watt light bulb would rack up over 10 hours).

Antweiler sees such parity coming over the next couple of years, which lines up with an annual battery price survey conducted in December by Bloomberg New Energy Finance, a group that provides insight and data on the transformation of the energy sector. The survey found that last year, battery prices fell by 13% to $137/kWh, down from $1,100 per kWh in 2010.

At the same time, the energy economist says he wouldn’t be surprised if gas prices climb to $2 per litre over the medium-term.

“The moment electric cars are cheaper than gasoline cars, it’s a no brainer. We’re getting to that point.”

Metro Vancouver, like many urban centres, still faces some big market failures to make electric vehicles both equitable and practical. Chief among those include expanding a wider network of charging stations, whether on the side of highways or in the underground parking lots of multi-unit buildings.

Despite the fiscal constraints brought on by the COVID-19 pandemic, Antweiler said he has no doubt investment will continue to pour into B.C’s electric future, not least because of the province’s ample supply of hydroelectric power.

“This is one of the low-hanging fruit to stimulate the economy,” he said.