VICTORIA — Most people in British Columbia are doing their best to follow public health guidelines during the COVID-19 pandemic, but some are acting badly, Premier John Horgan said Wednesday. Horgan also highlighted the case of a B.C.
Jan 27, 2021 5:00 PM By: Canadian Press 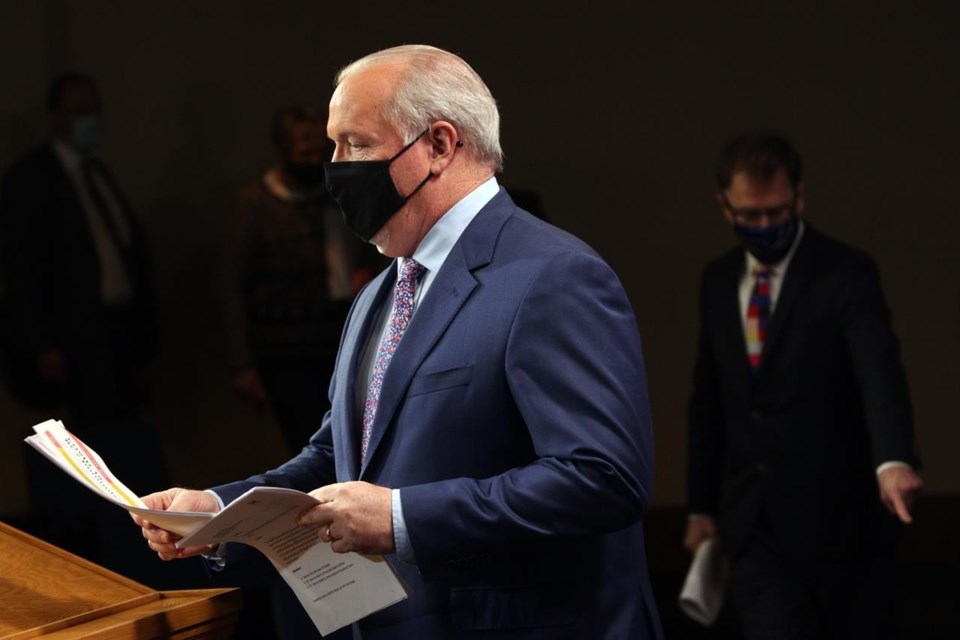 VICTORIA — Most people in British Columbia are doing their best to follow public health guidelines during the COVID-19 pandemic, but some are acting badly, Premier John Horgan said Wednesday.

Horgan also highlighted the case of a B.C. couple who travelled to Yukon, where they're alleged to have jumped the queue to get an early COVID-19 vaccine shot.

"I believe there's nothing more un-Canadian than going to another jurisdiction to jump the line because you have the means to do so," Horgan said at a news conference. "Those are the types of examples we want to put in our rear-view mirror."

Horgan said it's disconcerting that some people are holding large gatherings in Vancouver penthouses and others are looking for parties in Whistler despite health restrictions.

He expressed his concern as well over incidents of racist behaviour towards Indigenous people who are fighting COVID-19 outbreaks in their communities.

But Horgan said most people are sticking to the rules and helping keep everybody safe during the pandemic.

Horgan urged people to find that "extra gear" to battle COVID-19 over the coming weeks.

"You, too, have an obligation," he said. "The vast majority of British Columbians have stepped up to that obligation."

Horgan said provincial health officer Dr. Bonnie Henry's recent call for people to do more to fight COVID-19 was her plea to get everybody to adhere to public health restrictions.

"Dr. Henry was speaking earlier this week to the small group of British Columbians who think they're above everyone else," he said. "Dr. Henry was talking to those who were not listening."

Horgan said B.C. has no immediate plans to follow Manitoba's decision to impose travel restrictions that will require anyone entering the province to self-isolate for 14 days.

B.C. has considered its own travel restrictions, but evidence to support such measures "is not there at this time," he said.

The province reported 485 new cases of COVID-19 today, and four additional deaths for a total of 1,172 fatalities.

A joint statement from Henry and Health Minister Adrian Dix says there are new clusters and outbreaks, including at the Fraser Regional Correctional Centre in Maple Ridge, where nine inmates and two staff members have tested positive.

It says there are COVID-19 "hot spots" in Fernie and Williams Lake where the virus is spreading quickly.

This report by The Canadian Press was first published Jan. 27, 2021.