Doug Scott, manager of the Gaming Police and Enforcement Branch (GPEB) between 2011 and 2013, tells of a lack of police participation at B.C. casinos as suspicious transactions reached hundreds of millions of dollars each year
Feb 8, 2021 5:19 PM By: Graeme Wood 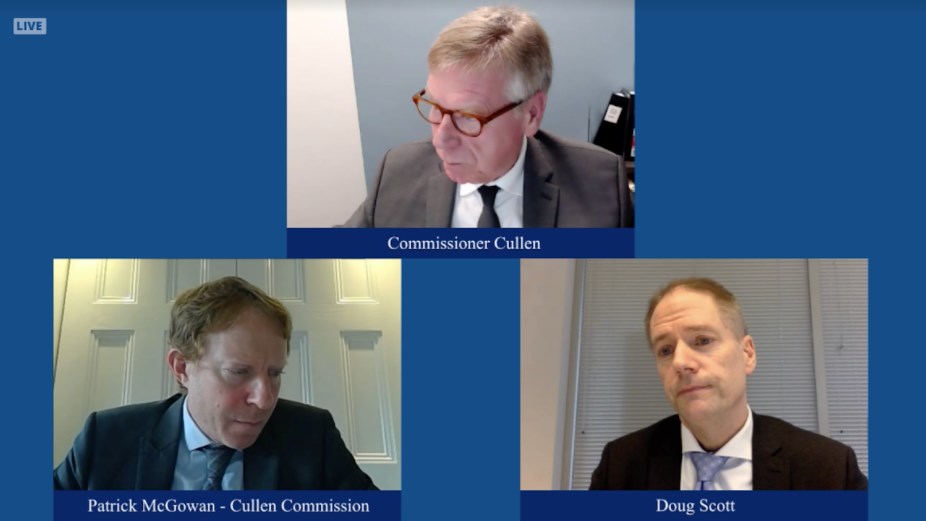 The ‘Cullen Commission’ of inquiry into money laundering in B.C. heard from Doug Scott, manager of the Gaming Police and Enforcement Branch (GPEB) between 2011 and 2013, lower right. Justice Austin Cullen, top, is the commissioner, who is assisted by lead counsel Patrick McGowan, bottom left.

An ex-RCMP officer turned manager of gambling regulations for the B.C. government says he had lost confidence in the federal police organization to effectively tackle financial crime such as money laundering occurring in the province’s casinos.

“I left [the RCMP] with my belief there was no capacity in the RCMP, specifically in financial crime, or proceeds of crime, that would be able to garner the attention to have an investigation done,” Doug Scott, manager of the Gaming Police and Enforcement Branch (GPEB) between 2011 and 2013, told the Commission of Inquiry into Money Laundering in B.C

Scott’s time heading GPEB was a time gamblers increasingly cashed in six-figures worth of $20 bills, commonly bundled in elastic bands and stored in duffel or grocery bags, at casino cages in the Lower Mainland.

His testimony aligns with other officials who have typically pointed to failings of other agencies or people involved in what should have been a multi-stakeholder approach to anti-money laundering (AML) policies.

Scott added he was also aware the Illegal Gaming Enforcement Team (IGET) had been shut down two years prior by then Solicitor General Rich Coleman.

As such, Scott said he did not communicate to the RCMP the concerns about money laundering that had been raised by several of his casino investigators.

“I didn’t think there was significant likelihood of getting their attention,” said Scott, now an assistant deputy minister with the Ministry of Finance.

Two years would pass from his 2013 departure until an RCMP investigation began into local, illegal money service businesses tied to a transnational crime network.

Meanwhile, Scott described his two years at GPEB as slow moving in addressing suspicious cash, despite it being a priority.

“I was new to government and I was shocked how long things took,” he said.

But the commission’s co-lead counsel Patrick McGowan questioned why Scott never had GPEB investigators interview gamblers about the source of cash — an obvious AML tool that had not been happening.

When Scott arrived at GPEB, he said GPEB investigator Larry Vander Graaf told him GPEB didn’t have the authority to do so, nor were they equipped to deal in potentially dangerous situations. Furthermore, he said the British Columbia Lottery Corporation (BCLC) “opposed” such interviews (as did casinos, citing revenue concerns, the commission has heard from other officials). Scott said he questioned the supposed lack of authority but never sought a legal opinion to appease his suspicion.

GPEB is the government regulator for BCLC, which manages and conducts gambling activity on behalf of the government. It is not clear the genesis of the erroneous assumption that GPEB did not have such authority, although it appears, based on testimony, to have been baked into the agency upon Scott’s arrival.

Scott described a “gulf” of views between the two Crown agencies and how, upon arrival, GPEB investigations were “on an island unto themselves.”

GPEB investigators had little to no presence on casino floors for years on end, didn’t work late hours and typically only packaged BCLC transaction reports to a federal agency, the commission has heard.

Lawyers for BCLC officials pounced on the key misunderstandings of authority within GPEB.

Marie Henein, lawyer for terminated BCLC vice-president of compliance and security Rob Kroeker, pointed out GPEB had 30 investigators, all of whom did not approach a gambler about the source of cash.

BCLC lawyer Bill Smart asked Scott if he had elevated AML policy concerns to superiors, such as within the responsible ministry. Scott said he did not, although the ministry was aware of the situation. He further explained that GPEB was developing a phased approach to addressing the suspicious cash.

Smart put forth that simply asking gamblers about the source of funds at a cage could produce investigative leads for police.

Scott said during the third of three phases, he was going to issue a policy directive to have gamblers interviewed about their source of cash.

“In retrospect I should have accelerated phase three,” said Scott before the commission, which recently heard from four past and present BCLC executives who pointed to failures elsewhere to address the suspicious cash buy-ins.

Scott told of how he didn’t adopt the views of BCLC that Chinese gamblers simply wanted to play with cash for various cultural reasons.

He also told of how a BCLC cash alternative program was not working, as it was voluntary. There were also ideas within GPEB of a cap on cash buy-ins, but Scott said that was a “blunt” instrument that would impact honest gamblers.

Still, “I think a lot of people have difficulty conjuring up a legitimate explanation for $100,000 or $200,000 in a grocery bag in $20 bills at 11 o’clock at night,” said McGowan, asking about source of cash requirements or a buy-in limit for such a transaction.

“At that time, when I was in that place, it was fully in the purview of BCLC,” said Scott.

Scott said a “cash-in cash-out” policy existed “that prevented the money from being converted to cheques. “Someone comes in with certain denominations, they leave with those denominations.

Scott said $6 billion in cash was flowing through B.C. casinos each year, around 2011-13. Of that about 1% ($600 million) was deemed suspicious (although many suspicious transactions under $50,000 went unreported by River Rock Casino and Resort, the commission has heard).

The commission has heard how BCLC also erroneously adopted the view that money laundering could not be linked to gamblers who were losing money at the tables.

These cash buy-ins are central to the portion of the inquiry looking at money laundering in B.C. casinos.

What is purported, and largely accepted or uncontested, is that cash from Vancouver’s deadly drug trade, much of it stemming from China-derived fentanyl and Mexican cocaine, made its way through casinos. It was first collected by so-called underground bank operators in Richmond, on behalf of transnational organized crime networks, and loaned to gamblers, among others. And each time a gambler lost, they would repay the drug cash by other means, including asset transfers back in China to a partner of the local underground bank.

The commission continues this week with scheduled testimony from more GPEB executives, as well as acting CEO of Great Canadian Gaming Corp. Terrance Doyle, who is replacing long-time CEO Rod Baker, who now faces allegations of jumping the COVID-19 vaccine queue by flying to a remote Yukon community where vaccines were being distributed to Indigenous seniors, among others.