In a little over a month, there have been five cougar attacks on dogs across Coquitlam, Port Moody and Anmore, leaving three dead or missing
Mar 12, 2021 12:19 PM By: Stefan Labbé 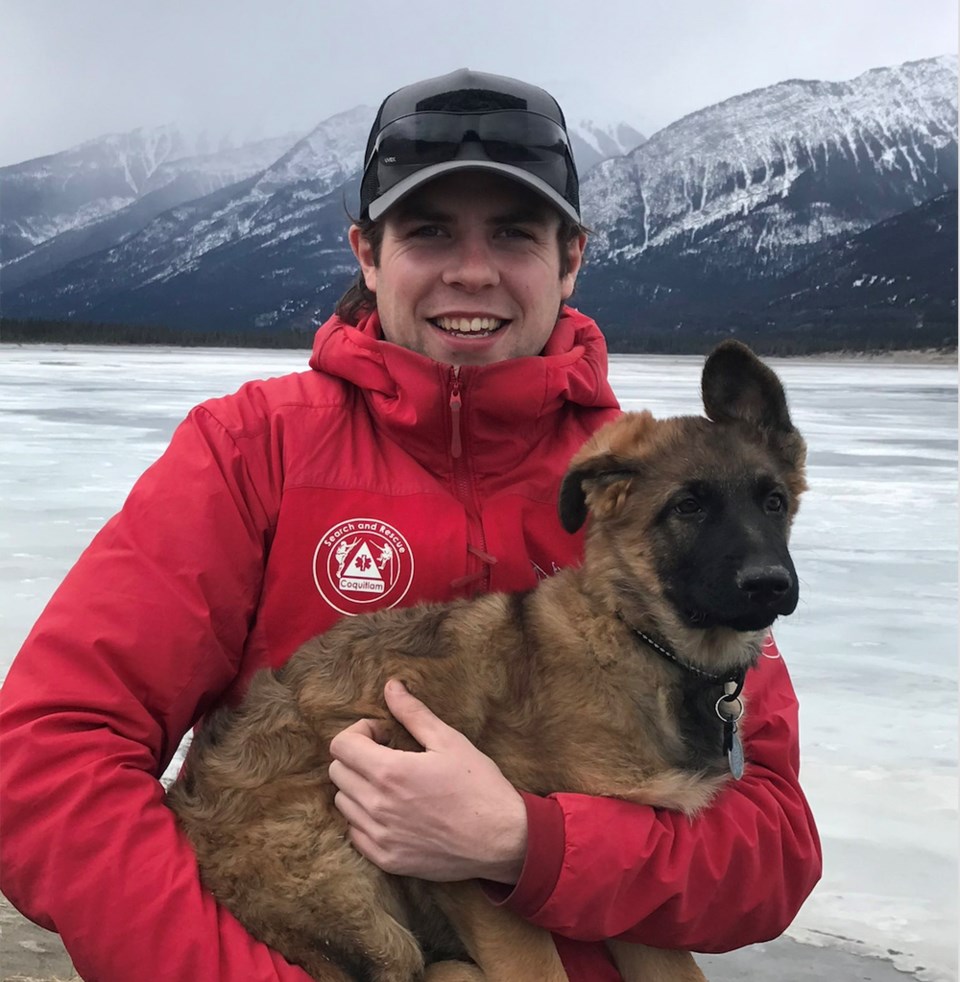 The Anmore family had driven out to Alberta a week earlier to get the German Shepherd puppy, named Diez. This is at least the fifth such attack in the Tri-Cities over the last five weeks. - Coquitlam SAR/Twitter

A 22-pound German Shepherd puppy tapped to become a Coquitlam Search and Rescue dog had its life cut short Thursday night when a cougar pounced on the animal and dragged it away.

The incident occurred just before 8 p.m. in Anmore near the intersection of Sunnyside Street and Leggett Drive. The owner, a long-time resident and volunteer with both the Sasamat fire department and Coquitlam Search and Rescue, was walking the puppy on a four-foot leash, according to Anmore mayor John McEwen, who is close with the family.

“The cougar jumped on him and took the puppy,” said McEwen. “When he kicked the cougar and tried to fight him off, it turned on him.”

The encounter ended with the cougar dragging the young dog away into the bushes. It hasn’t been seen since.

Coquitlam RCMP spokesperson Const. Deanna Law confirmed police were requested at the scene. After foot patrols turned up nothing, they offered victims services support to the family and handed the file over the BC Conservation Officer Service.

McEwen said it had only been a week since the family had driven out to Alberta to pick up the puppy. The plan, said the mayor, was to train it and put it to work with SAR.

“This dog is brand new. But at the same time, it’s only the right dog that gets chosen for this,” said Coquitlam Search and Rescue president Tom Zajac. “It’s an incredible amount of dedication and time.”

Our team would like to express our condolences to Member, Isaac, who tragically lost his new puppy Diez, in a cougar attack while out for an evening walk in Anmore Thursday March 11. Diez was on leash at the time and they were walking along one of the main roads in Anmore. pic.twitter.com/EvAtgoc9Hc

LATEST IN A STRING OF COUGAR ATTACKS

This is at least the fifth time a cougar has attacked a pet dog in the Tri-Cities in just over a month, and the second to be killed over the last few days.

In the early hours of March 10, a Port Moody resident was walking their leashed, 14-pound dog in the Foxwood Drive area of the city when a cougar jumped out of the bushes and attacked the dog.

The owner was left physically unharmed and was able to bring the dog to a veterinary clinic. However, the animal did not survive its injuries.

"We think that the cougar was not expecting the dog and the dog owner to walk by," she said. "That’s what we think triggered this predatory act on a dog."

On Feb. 7, a cougar sprung on a small dog along a trail on the west side of Buntzen Lake as hundreds of people were out enjoying the afternoon sunshine. The big cat also dropped the dog after the owner was able to scare it away, but not before severely biting its neck.

In a similar incident only two days later, a man was outside his house in the Nash Drive area of Coquitlam when a cougar snatched one of the family’s small dogs, which again dropped the pet when challenged.

And in an even more dramatic attack, a cougar leapt over a fence in a Burke Mountain family’s yard to snatch a pug puppy only a few feet away from a mother’s feet. The big cat disappeared with the pet.

When asked whether the animal involved in the most recent attack in Port Moody was connected to the previous incidents in the Tri-Cities, acting Sgt. Alicia Stark said there's so much distance between all of them that she didn't believe that the same cougar family unit was involved.

The BCCOS officer did note, however, that while small dogs match the profile of cougars' prey, the string of attacks was not a normal trend.

"We’ve definitely seen an increase in incidents this year," she said. "I don’t know the exact science behind it."

Luci Cadman, a certified bear viewing guide and executive director of the North Shore Black Bear Society, said her group has worked extensively over the last several years to expand its education program to cougars, especially in the winter months when the big cats come down from the mountains to prey on grazing deer.

Working with BCIT wildlife conflict expert Tom Saare, the group has looked to reduce risk in the community and has reached out to partners in Coquitlam to spread the word.

Cadman said that despite the rise in cougar attacks in the Tri-Cities over the last five weeks, attacks on humans are extremely rare, and North America-wide data shows 27 fatal encounters over the last 100 years.

But the chance a human and a cougar will meet each other on a trail, roadside or backyard has gone up as development pushes into the interface between urban and wild landscapes. And feeding birds and pets outside only serves to increase that risk, as the food attracts the small animals, like squirrels and racoons, that cougars prey on.

While often an easy out, blame cannot always be put on newcomers to the suburbs of the North Shore and the Tri-Cities unaware they share their neighbourhood with large predators.

This year, the pandemic has made things worse, said Cadman, as a steep rise in pet ownership, and public health recommendations to hit the trails, have increased the risk humans will meet the often elusive big cats.

Following the Anmore attack, McEwen said he called the BC Conservation Officer Service Friday morning demanding they “get up here and find out what is precipitating the situation and make sure it doesn’t happen again.”

The BCCOS has brought in extra officers to manage the situation and is waiting for guidance from provincial biologists in Victoria, according to the mayor.

“We’re taking this very, very seriously,” he said, noting the BCCOS said they believe there are four cougars in an area extending down into Port Moody. “I want people to be safe and secure.”

McEwen said he’s working with BC conservation officers to take a collective approach.

“We can’t rely on emotions, as emotionally-packed as this is. We have to rely on the science,” he said.