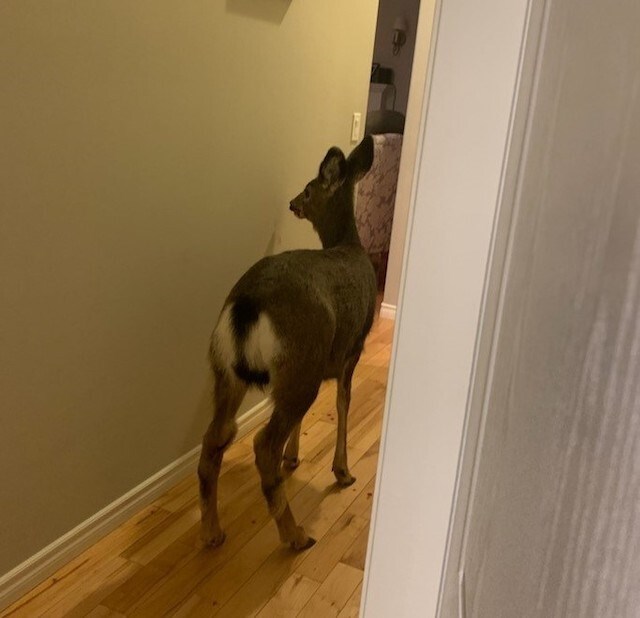 An Interior family had an unexpected visitor last weekend.Kamloops RCMP

Residents of a home in Westsyde got a shock over the weekend after discovering a deer inside their house.

Kamloops Mounties were called to a home Saturday in the 900-block of Pine Springs Road where an unruly deer had gained entry through a dog door.

“Wildlife inside a house can be extremely destructive,” RCMP Const. Crystal Evelyn said in a news release.

“In this case, police were able to safely help the deer out, preventing any further harm from occurring to the animal or the house.”

Police described the deer as smashing and thrashing through the house, but were able to apprehend it, relatively unscathed.

After getting itself in the house, the deer was seen jumping at the fireplace and window trying to escape. During its failed escape attempts, the deer damaged a television and other household items.

Officers were able to slide the deer out of the house, Evelyn said, after placing it on a rug with a blanket over its head.

Other than a minor cut on its mouth from entering through the dog door, the deer appeared unharmed.

With jackhammer, drill, saw and sledgehammer, firefighters rescue cat from pipe
Jan 18, 2021 7:20 AM