Following a visit from federal wildlife officers earlier this week, reports say the chainsaws clearing a path for the Trans Mountain pipeline in Burnaby have fallen silent.

On Monday, April 12 two federal wildlife officers visited the TMX work site at the Brunette River Conservation Area following a tip from a local activist group called the Community Nest Finding Network (CNFN). Specifically, that tip was regarding an Anna’s Hummingbird nest CNFN had identified days prior and believed was at risk of being destroyed by the crown corporation’s logging.

Sara Ross, co-founder of CNFN went with the officers into the work site and she says her suspicions were confirmed while the officers inspected the area.

“I was very sad to discover this loss,” Ross said. “These tiny and fierce birds symbolize hope for many people and cultures. To witness nests being directly threatened and damaged by a tar sands expansion project... is a disgrace.” 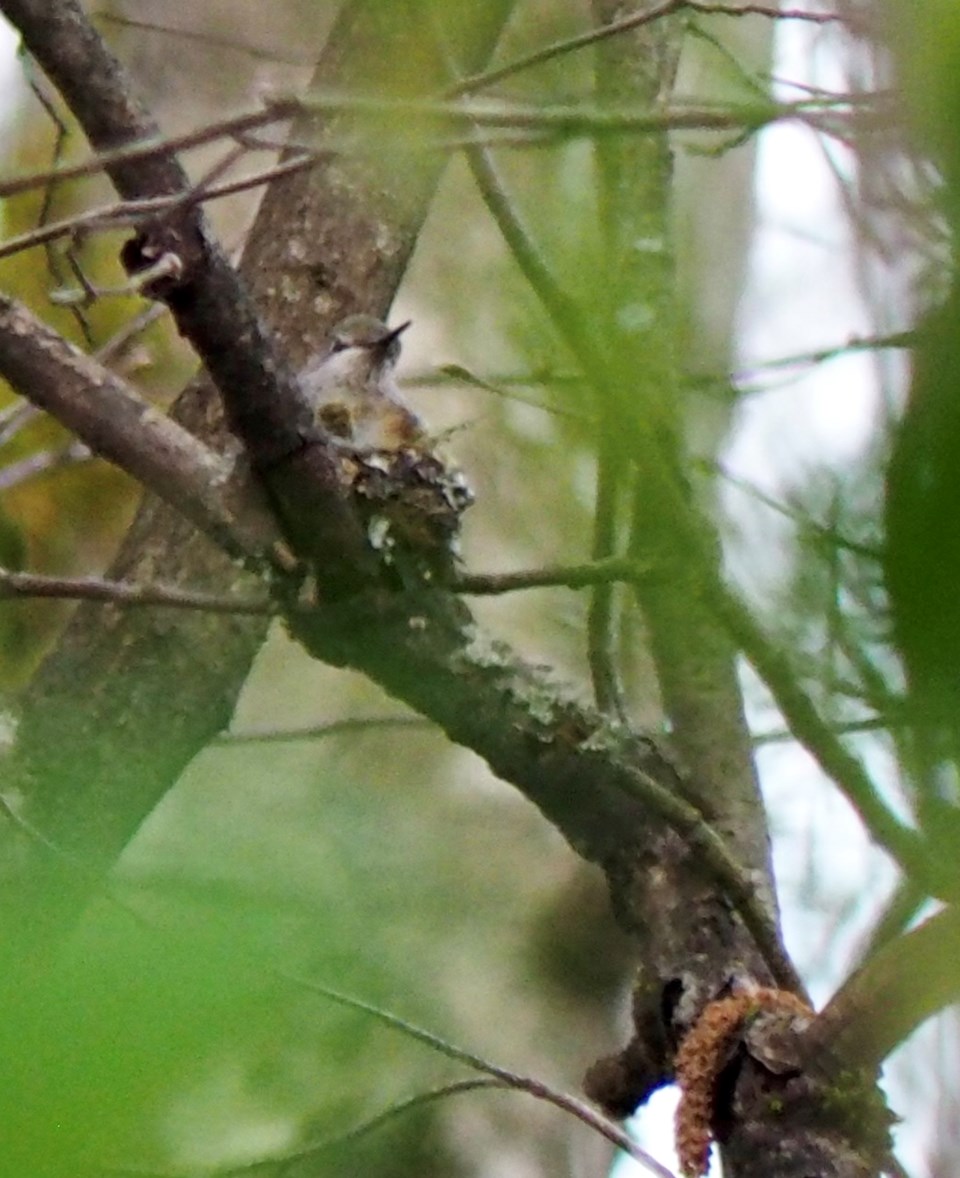 This Anna's Hummingbird was spotted near where Trans Mountain crews are working to clear the way for a pipeline. . By Donna Clark

Upon this discovery, Ross says the wildlife officers ordered the cutting stopped and nearly a week later the clearing of the area has not resumed.

Justus Mirembe is the lead federal wildlife officer for the file who attended the work site on Monday. While he confirms there was an inspection conducted he did not say whether or not a federal investigation into the logging practices of Trans Mountain would be launched.

"At this point, we are monitoring all the activities that are going on over there and we are in the process of determining the way forward," Mirembe said.

Mirembe added that while the Anna’s Hummingbird is not considered a species at risk it is federally protected as it is a migratory bird.

Donna Clark, another nest finder with CNFN says that despite the small victory she is frustrated that logging only stopped when it started affecting the area’s avian residents.

“We must also point out how outrageous it is that bird’s nests are protected by federal law, and yet sovereign Indigenous nations are criminalized and arrested, often with excessive violence, when trying to protect their land,” Clark said.

Trans Mountain was recently granted the ability to circumvent a section of the City of Burnaby’s tree bylaw, which requires a permit for anyone to damage or cut down any protected tree – those with 20.3-centimetre diameters or larger – in the city. However, the order, which came from the Canada Energy Regulator, said the project needed to comply with all other sections of the bylaw. Trans Mountain plans to cut down 1,308 protected trees in Burnaby, not including trees with smaller trunks.

Relocation of nests ‘not an option’

As for what Trans Mountain is doing to avoid destroying nests, a statement from the corporation says daily inspection for nests takes place each morning by environmental professionals, with trees being marked if a nest is found.

“An inspection was conducted with no nest visible or identified in the working area. One nest was later found,” the statement reads, possibly referring to the four-centimetre diameter Anna's Hummingbird nest.

To avoid cutting down nesting trees Trans Mountain employs a buffer area around them in accordance with federal guidelines to reduce risk to migratory birds. Buffer zones can vary widely on a case-by-case basis.

“Where an enclosure or fencing is placed around a tree where a nest has been identified, then the tree is not to be cut down unless it is determined by a Qualified Environmental Professional that the nest is no longer active,” Trans Mountain’s statement reads, adding that the relocation of nests is not an option.

More information on protection guidelines for migratory birds can be found on the Government of Canada’s website.

- With files from Chris Campbell