B.C. won't change school protocols in the face of COVID-19 variants – yet 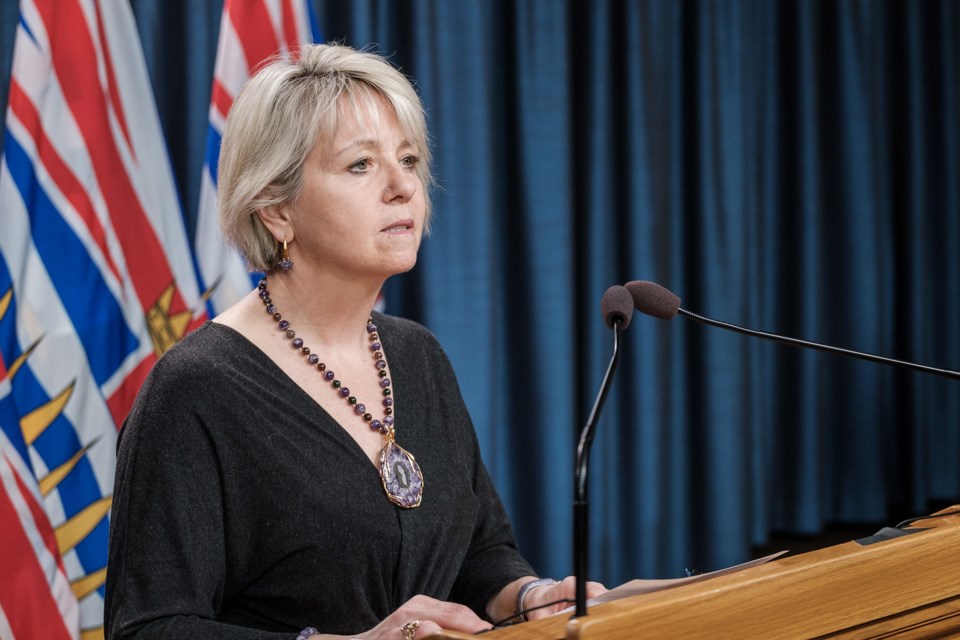 Dr. Bonnie Henry at a media briefing Feb. 23. Henry said the rise of COVID-19 variants is "concerning" and officials are keeping a close eye on the situation in schools. Government of B.C.

The arrival of COVID-19 variants in Fraser Health schools is “concerning,” but it won’t be leading to any changes in provincial protocols – at least not yet.

The briefings followed the news over the weekend that B.1.1.7 variant cases had been found connected to seven schools in Surrey and North Delta.

Henry and Gustafson both explained that the batch of new cases, though reported at the same time, had in fact occurred over a period of weeks. The cases were reported together because of changes in provincial testing that have allowed officials to screen COVID-19 samples more efficiently for the so-called “variants of concern,” which are more highly transmissible than the original virus.

As of the Feb. 23 briefing, testing was underway on a large number of students and staff connected to the exposures at the seven schools. Henry said initial rapid testing had so far uncovered one possible positive case, which was to undergo further testing.

She said Fraser Health (the health authority that covers the territory from Burnaby to Boston Bar, including New Westminster, Surrey and Delta) is expected to have more details about those results over the coming days.

“We are paying extra attention (to the variants) so that we better understand where and if these are spreading, particularly in environments that are so important like our school systems,” Henry said.

“So we’re not doing things differently, but we are doing enhanced paying attention so that we better understand the impact that these are having in our communities around the province.”

On Monday, Whiteside referred back to the first B.1.1.7 variant case to show up in connection with a B.C. school – a single case connected to Garibaldi Secondary School in Maple Ridge three weeks ago. Extensive testing at that school turned up no other positive cases.

Henry reiterated that point – one she has repeatedly made throughout the pandemic.

“We know as well that, when the safety plans that are in place at these schools are being followed, that they work. We have had a cluster of exposure events, but again, very little transmission so far, and that’s why we’re doing the extra testing to be reassured on this,” she said Tuesday.

“But so far it does not look like there is significant transmission from these variants, which is really good. It shows us that the safety plans in schools are working. And yeah, it is concerning, and that’s why we’re watching it so closely and we’re paying so much attention to it.”

NO CHANGE IN POLICIES

The two briefings drove home the message that the province does not intend to change any of its school health and safety protocols at this point.

Which raised the question: Can school districts go above and beyond the existing provincial guidelines if they feel it’s necessary for their particular situation?

Questioned on that point by reporters on Monday, Whiteside said it’s necessary to let the current testing process unfold before taking any new steps.

In response to a separate question on the issue of district-specific regulations, Whiteside said B.C.’s Education Restart Plan was supported by guidelines developed by the provincial health officer.

“We have relied on our public health leadership to guide us through this pandemic based on science and based on the evidence.”

On Tuesday, Henry was also asked whether school districts or individual schools can set their own rules.

“If we look at how we have set up the safety plans for schools, this is a team approach, and the public health guidance that we have sets a standard,” she said. “Then it’s adapted by the school superintendents, by the principals, by the teachers in each individual school, depending on their physical layout – everything from ventilation to the numbers of kids in the classes, the types of classes that they have. It is individually tailored with the provincial backbone of the guidance that we have. There is absolutely flexibility.”

Henry said it’s important for teachers to “encourage” mask use where it’s appropriate in classrooms.

“These are the things that are individual classroom- and school-based,” she said.

The briefings also made it clear that keeping schools open is a provincial priority.

Whiteside noted existing school guidelines were created on the understanding that maximizing in-class instruction is “absolutely critical” for students – not just for their learning but for all the other social supports they get at school.

Henry, too, returned to that theme in Tuesday’s briefing.

“I just have tremendous respect for the vast number of educators in our system who are making this work and providing a safe environment that is so important for the growth and development of children, and we’ve seen that more and more – how important in-classroom schooling is for our next generation, and the importance of keeping that up and making sure that we can do it in a way that’s safe,” she said.