“This is a stark reminder of how quickly the virus can spread and its serious impact, even among healthy, young athletes.”
Apr 7, 2021 12:44 PM By: Daniel Wagner 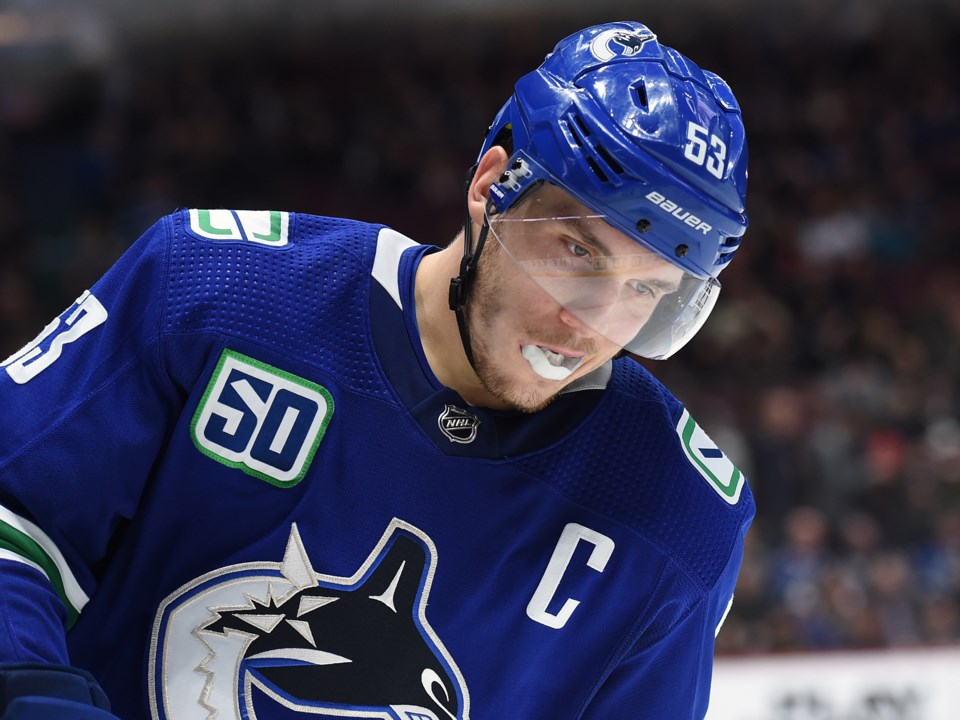 Bo Horvat is one of 25 cases of COVID-19 in the Vancouver Canucks organization. photo: Dan Toulgoet

Apart from one statement from GM Jim Benning, the Canucks have kept quiet over the past week as they’ve dealt with a COVID-19 outbreak. That has left a lot of uncertainty over key questions, such as how the outbreak began, how many people have actually been affected, and whether the outbreak involved a variant of the original virus.

On Wednesday, the Canucks released a statement from team physician Dr. Jim Bovard and infectious disease physician Dr. Josh Douglas that clarified answers to some of those questions, while still leaving some things uncertain.

According to the statement, 25 people in the Canucks organization have tested positive for COVID-19: 21 players — including three from the taxi squad — and four members of staff. According to a report from TSN’s Darren Dreger, three of the staff members are coaches, with the other a member of the support staff.

The addition of a third member of the taxi squad and a member of the support staff is significant, as it’s the first sign that the virus spread off the ice as well as on the ice. Previous reports indicated that all of the confirmed cases were limited to players and coaches who would have been on the ice for practices on Tuesday and Wednesday of last week.

This also confirms that all 18 players on the NHL’s official COVID protocol list have tested positive for COVID-19 and are not on the list solely as close contacts. Indeed, the statement adds that one additional player is a close contact — either that player is not required to be on the COVID protocol list because they are a member of the taxi squad or the Canucks have not disclosed his name for other reasons.

The statement also confirms that the outbreak is a variant of the COVID-19 virus, which had previously been suspected but not confirmed. While reports have indicated that the specific variant is the highly-transmissible P.1 variant — B.C. is a hotspot for that particular variant in Canada — the Canucks’ statement says that “full genome sequencing by BCCDC will be required to determine which specific type.”

There has also been speculation that the Canucks’ outbreak could have been connected to a game they played against the Montreal Canadiens, who had their own positive COVID-19 case. While that was extremely unlikely — the Canadiens were limited to just one case compared to the rapid spread through the Canucks’ roster — the statement confirms that the virus was initially contracted in the community, not on the ice.

“An ongoing investigation by Vancouver Coastal Health and club contact tracing staff attributes the source infection to a single individual obtained in a community setting, which has since been identified by public health as a public exposure location,” reads the statement. “Rapid spread of infection throughout the team indicates a link between contacts and the primary case.”

In other words, one person caught the virus in the community and it spread to the rest of the team from there. Considering the Canucks were back at practice on March 27 and 28 after a two-day break, that is ample time for the virus to incubate and then show up on tests the following week.

What is still unclear after this statement is who initially contracted the virus — while Adam Gaudette was the first to test positive, that does not necessarily mean he was the primary case. That is ultimately a minor detail and it is not helpful to assign blame but it could be useful as a warning to others of how the virus can spread.

"They're just normal guys that have families."

It’s also important to note that the 25 people noted in the statement are only those within the Canucks organization who have tested positive. It does not cover how far the virus reaches into the lives of the player’s families.

Sportsnet’s Iain MacIntyre spoke to Bo Horvat’s parents about the impact the virus has had on their son and his family. While Horvat’s wife and son are both healthy, Horvat had to spend his birthday on Monday quarantined in his basement to keep his family safe.

“You get to know these guys on a personal level,” said Tim Horvat to MacIntyre. “I know people look at them as professional athletes or whatever. When I see them at the arena... I'm giving them hugs. They're just normal guys that have families, and you just worry sick for them all.”

The statement ends with a warning to continue following health orders to prevent the spread of COVID-19:

“This is a stark reminder of how quickly the virus can spread and its serious impact, even among healthy, young athletes.”