FRANKFURT — The German economy, Europe's largest, shrank by 5% in the pandemic year 2020, ending a decade of growth as lockdowns wiped out much business and consumer activity.
Jan 14, 2021 4:48 AM By: Canadian Press 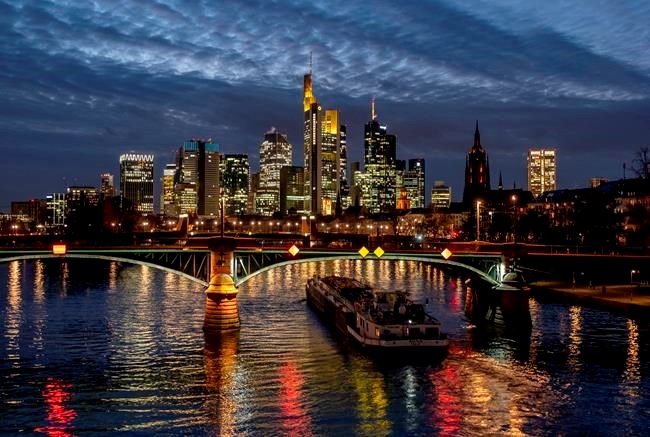 FRANKFURT — The German economy, Europe's largest, shrank by 5% in the pandemic year 2020, ending a decade of growth as lockdowns wiped out much business and consumer activity.

As dreary as the numbers were, the drop was smaller than many had expected, and a high savings rate suggested consumers could be ready to unleash a strong economic recovery when the lid finally comes off.

Looking ahead, the stage could be set for a substantial economic rebound since consumers might be ready to spend once the pandemic recedes, having increased their saving rate to a record high of 16.3% during 2020. Albert Braakmann, head of the group for economic estimates and prices, said consumption “could increase significantly.”

Economy Minister Peter Altmaier said that once the pandemic was contained, growth would be “clear and noticeable” in 2021. The government's estimate of 4.4% for 2021 growth is to be updated Jan. 27.

Germany's economy did better than several others in the 19-country eurozone as it was supported by manufacturing, which has taken less of a hit than services. The downturn was smaller than in France, which according to European Commission estimates cited by Destatis, shrank 9.4%, Italy, which was down 9.9%, and tourist-dependent Spain, off 12.4%. Official figures for those countries are due in early February.

The U.S. had a downturn of 4.6% while China's economy grew 2.1%, according to the estimates used by Destatis.

In the fourth quarter, German growth “roughly stagnated,” said Michael Kuhn, head of the GDP and output calculation group at the agency. He said that since very little data was available for December, when the latest round of lockdowns hit, the agency was not making an official estimate. The fourth-quarter figure is to be announced on Jan. 29.

The pandemic downturn, which followed 10 straight years of annual growth, was smaller than that experienced during 2009, when the economy shrank by 5.7% The 2020 figure compares to modest growth of 0.6% in 2019.

In 2020, the economy seesawed between lockdowns and a robust upswing that still left growth below the previous year. The worst quarter, the second, saw a quarter-on-quarter plunge of 9.8% followed by a rebound of 8.2% in the third. Unemployment has been contained in Germany and many other European countries only by extensive state support such as paying the salaries of furloughed workers.