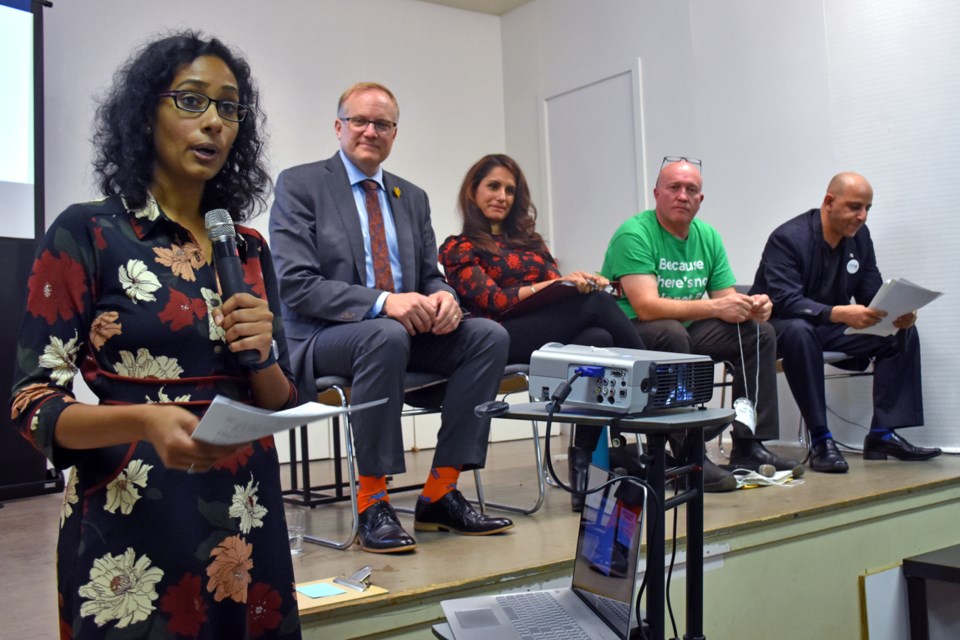 A debate that started with a Christian protester drawing the ire of some attendees and an angry outburst from another man quickly settled into a respectful exchange of ideas focused on the climate crisis.

As residents began filling the seats at Burnaby Neighbourhood House’s Community Hall on Rumble Street in Burnaby South Thursday evening, a man stood at the side holding a large sign proclaiming, "Jesus is the ethos in the historical development of western liberal democracy."

A woman told the man she was a Christian but found his sign offensive.

The protester assured an organizer he wasn’t there to disrupt the meeting and was allowed to remain.

A guy is holding a big sign, saying "Jesus is the ethos in the historical development of western liberal democracy."

A woman said she's a Christian but offended by the sign.

He just assured an organizer he's not here to disrupt. pic.twitter.com/7ioJlC4P9m

A man stood up and shouted “He’s not our candidate!” upon seeing New Westminster-BurnabyNDP incumbent Peter Julian take the stage.

Moderator Lina Azeez explained Julian was standing in for his party’s leader, and the local incumbent, Jagmeet Singh, who was on the road, leading the New Demoracts’ national campaign.

She also introduced three of Singh’s opponents who attended the debate: Liberal Neelam Brar, Green Brennan Wauters and Al Rawdah of the People’s Party. She said Conservative Jay Shin “declined” an invitation to the debate.

Shin told the NOW he wanted to be there but was visiting his sick father in hospital. The Tory said his father’s health is improving and he’s confident he’ll be able to attend future all-candidates meetings.

Below are some highlights from each of the four candidates.

“Moving away from fossil fuels is a priority of the Liberal Party, but we have to do it in a balanced economic approach. I want to build a strong, more sustainable future for everybody,” the businesswoman said.

Brar touted the Trudeau government’s record on climate change and the Liberals’ campaign promise to bring Canada to carbon neutrality by 2050.

She returned to the theme of “balance” several times in the evening, including when defending the government’s purchase of the Trans Mountain pipeline. She pointed to Liberal policies offering rebates for green home retrofits, investments in clean tech businesses and a promised tax cut for carbon-neutral companies.

“We need to balance short-term job loss with long-term climate needs, and the Liberal Party is best suited to do that.”

“We only move the dial on climate change if we all work together in a meaningful way, and reconciliation is absolutely critical to that. We need to choose forward as a country, and the Liberal Party is definitely your only option to do that,” she said.

Wauters said he’s already working towards a clean energy transition as an installer of solar panels and a wind turbine technician.

“Not only do we have to switch the production of energy, but we have to reduce our energy use drastically very quickly,” he said.

The Green Party’s commitment to reduce greenhouse gas emissions by 60 per cent compared to 2005 levels is the most ambitious climate plan on offer in this election, Wauters said.

But, he said, that transition does not pose the economic threat some believe it does.

On Indigenous participation in climate action, Wauters said First Nations must have “make-or-break decision-making power” on all mass industrial projects on their territories.

Julian repeatedly attacked the Liberal government for its purchase of the Trans Mountain pipeline and its approval of its proposed twinning.

“There's simply no way we can meet the greenhouse gas targets that we need to hit as a country if the Trans Mountain [pipeline is expanded],” he said, calling the project “one of the biggest boondoggles in Canadian history.”

The New Democrat touted his party’s version of the Green New Deal – a suite of policies proposed for a wholesale energy transition.

Julian touted his party’s bill that would have implemented the United Nations Declaration on the Rights of Indigenous Peoples that died in the Senate – the fault of Liberal and Conservative senators alike, he said.

“What we have is a government, under Mr. Trudeau, that does not walk the talk. We've seen this with a number of boil-water advisories that continue across Indigenous communities. We see this when we look at the refusal by Mr. Trudeau and his government to actively make the resources available to Indigenous communities that they are crying out for.”

The businessman said he didn’t believe his opponents had looked back far enough in time for climate data to prove there was a need for climate action.

“Basically, what I'm saying is, do your own research. Do your own facts,” he said.

People’s Party Leader Maxime Bernier has said he will do nothing to combat climate change and would leave provinces to decide whether to address the issue.

“They’re all a very important part of our society. Why? Because they are native to our land here, and I like to think of us all as Canadians,” he said.

For information on future debates in Burnaby, click here.