Burnaby North-Seymour candidates faced off at a debate organized by anti-pipeline group
Oct 8, 2019 11:00 AM By: Kelvin Gawley 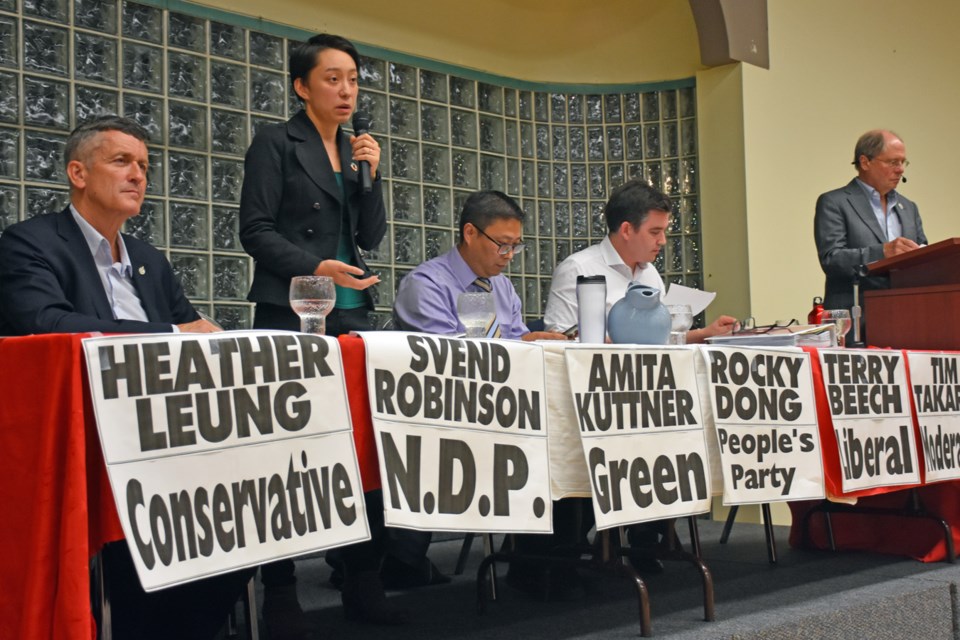 How will you protect people from the potential safety risks posed by the Trans Mountain pipeline?

That was one of the questions put to Burnaby North-Seymour candidates Friday evening during a debate held moments after the Conservatives booted their candidate in the riding, Heather Leung, for her past homophobic and transphobic comments.

Moderator Tim Takaro, a Simon Fraser University health sciences professor, noted the federal government and the Canadian Energy Regulator (formerly known as the National Energy Board) have not required Trans Mountain to release a safety plan for its Burnaby Mountain tank farm.

“Many people who are very familiar with the hazards feel there is no way to adequately ensure the safety of Burnaby residents if the tank farm is expanded. If elected, what would you do to protect us?” Takaro asked.

Dong said he has friends who live within 500 yards of the existing pipeline and they experience “no smell or hazardous air.”

He also expressed confidence the new pipeline, planned as part of Trans Mountain’s expansion project, would be safe.

“When we build new pipelines, we use new technology (and) strict regulation, so the operation is under very strict supervision. So it's supposed to be very safe,” Dong said.

Beech, the local incumbent, said the issue hits close to home for him – literally.

“I have the Kinder Morgan existing pipeline going through my front yard and the expansion is framed to go through my backyard. So I'm very invested in this,” he said.

Beech cited his work on the file, including attending regulatory meetings, listening to protesters and penning several reports.

“When issues get tough in this riding, I'm here to defend my constituents, and that is what I will always do,” he said.

Kuttner, meanwhile, alluded to their own family tragedy in answering the question. Kuttner’s mother died in a mudslide that struck her North Vancouver home in 2005. A subsequent coroner’s report determined the slide was “predictable and preventable.”

“This is a big one, because I have personally experienced what it’s like to be on the losing end of risks taken on by (government). So I will do everything I possibly can to protect our community,” Kuttner said.

Greens oppose the proposed expansion, but Kuttner said if it goes ahead they will do everything they can to ensure safety, including upgrading existing tanks, funding emergency response plans and mitigating the risk of fumes.

Robinson, who also opposes the expansion project, pointed to various reports raising concerns about the safety risks posed by the tank farm.

A 2015 report from the Burnaby Fire Department that outlined potentially deadly scenarios on Burnaby Mountain, including flammable crude leaks, poisonous gases, fires burning for days and, exploding tanks spraying molten crude and igniting other nearby tanks and the wildfires spreading from the tank farm to nearby homes and Simon Fraser University.

“If the fire department in Burnaby says this project is a risk, that should be the end of the discussion about the expansion of the Trans Mountain pipeline,” Robinson said.

The federal election is on Oct. 21.