'I kind of laugh it off': Sophie Grégoire Trudeau says PM is not a 'fake feminist'

The prime minister's spouse sat down with local candidate Neelam Brar and the Burnaby NOW to talk about women in leadership
Oct 9, 2019 8:58 AM By: Kelvin Gawley 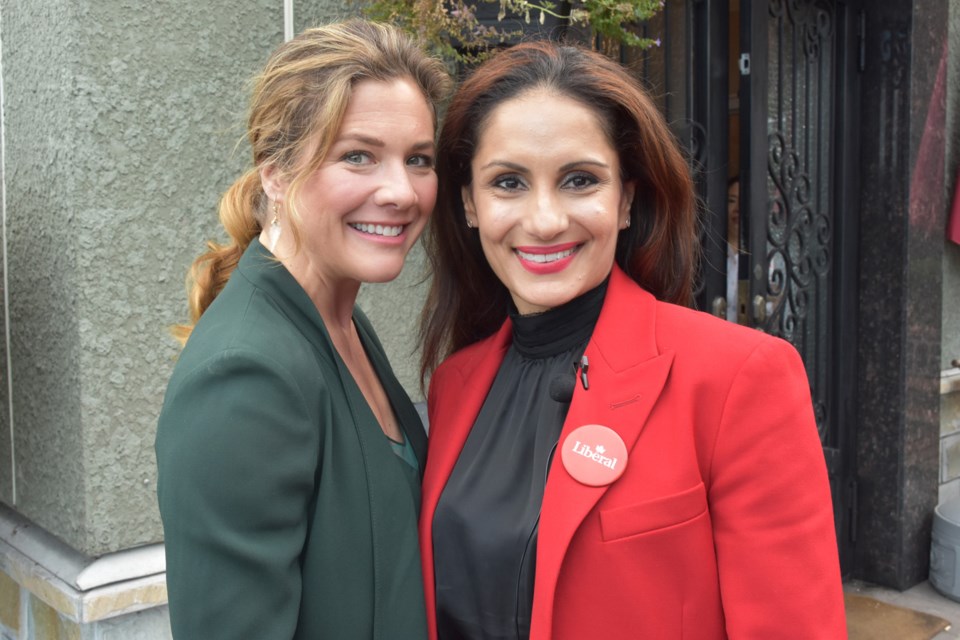 “If they only knew,” she told the NOW Tuesday.

As Trudeau attempts to maintain his image as a feminist leader despite kicking two of his female cabinet ministers out of the Liberal Party over the SNC-Lavalin scandal, Grégoire Trudeau was in Burnaby South with the party’s local candidate, Neelam Brar.

Ahead of a fireside chat at Burnaby Palace Restaurant, Brar and Grégoire Trudeau spoke to the NOW about women in leadership, representation and what it means to be a leader when you’re best-known for your relationship with a powerful man.

The following Q&A has been edited for length and clarity.

Burnaby NOW: What does it mean to have women in leadership; Why is it important?

The second and more broad reason is that when you have diverse opinions and thoughts at the table, you can consider more stakeholders. Women are known to be more empathetic and are able to consider really hard decisions from multiple different viewpoints, how it will affect the business, the government, the culture, the community, the environment, all of those aspects when you have different viewpoints at the table, and it's really important we have that diversity of thought.

And third, we need equality. We need access to equality in all parts of our infrastructure, government, private sector, and giving women the ability to dream big and have those dreams met is really important.

And we still had that little reflex: You ask a man, "You want to run?"

[He will respond] "I was waiting for you to ask me. Of course!"

And then you ask a woman to run, who's so qualified and she'll still tell you sometimes, "Am I able? Can I do this?" – Probably because we've been ingrained with the doubt and also because the structure of society – and of all patriarchal manners – don't allow us to move as freely as men do. And this is not only a detriment to women but to men as well. So, with all the programs we're pushing and all the inclusiveness that we want to create, we want to get people together to understand that equality is not just something that we talk about; we want to be living it and everybody will benefit.

If you looked at the debate stage last night, there were five men and one woman. What does that say about where we are?

SGT: I don't think that we can take one event and conclude from one event. But I do think that it sends, still, with a prime minister who has a gender-parity cabinet, who's pushing for a feminist policy assistance in every single decision the government makes, that we're creating benchmarks – but there's so much more work to do. We know this as women. I know this because I'm watching young women, and I listen to their concerns, and this is just the beginning. I really think we're part of a new movement.

NB: It's a journey. You can't say it is or it is not. When you think about how far we have come, I wouldn't be thinking I could run for politics after a long career in business, unless I saw the women ahead of me making decisions in both Canada and other countries. That's inspired me to believe I can do that. I'm running today because maybe one day I will be running the country. If we can get more women MPs elected, we can change what a debate forum looks like when all the leaders are debating.

Sophie, I'm interested about your experience, personally. You've done plenty of your own work and advocacy, but I think on the national stage, you're still sort of known as "the spouse of the prime minister." Has being married to the prime minister helped you advance these causes or has it caused you to take a backseat to some degree?

SGT: There is still old structures that surround the spouses of the leaders around the world, and I think it's slowly changing. I don't have an official role, but before I came into politics, I was already a public speaker and working in the media and all that. So it's kind of a natural extension of what I had already started: addressing self esteem issues, eating disorders, mental health and physical activity. They're causes that are so close to my heart that I want to continue to push.

Did it give me a greater platform to be able to reach out to more people? Yes. Do I take that responsibility seriously? Extremely. And I will never stop, no matter what path I'm on, because one of the biggest lessons I have learned is that all of our sufferings and all of our success are linked. We don't succeed in silos.

Neelam, your party has nominated many women (roughly 39 per cent) but the NDP is pointing to the fact their slate is virtually 50 per cent female as evidence they’re a feminist party. Is it as simple as having that 50/50 on the slate?

NB: I think it's about encouraging women to run and ensuring that we give women an opportunity should they want those leadership positions, encouraging them to know that these are attainable and these are things they can succeed at. Whether or not we're at 50/50 or 40/60, that really depends on creating more awareness so that next time we can have more candidates. I think you will see years coming forward where there are more women than men and there's nothing wrong with that. It's critical that we encourage women and we know that it's possible for them to run.

Sophie, how do you react when people call your husband a "fake feminist?"

SGT: I kind of laugh it off. If they only knew. The criticism is always there in politics. When I go out and meet people, that's not what I hear at all. I think that most people know who my husband is and know his values. And the more harsh winds come your way, the more opportunities you get to show what you're made of and who you are.

What are some specific policies that you can point to that have been accomplished over the last four years that specifically help the advancement of women?

NB: Right out of the gate, we balanced the cabinet. So we are leading by example as a government. Women have a voice; It's recognized and it is strong. Creating the ministry of women was extremely important in order to provide resources focused on advancement of women. Creating a zero-tolerance harassment policy. Ensuring that we have gender pay equity.