2021 is year of labour unrest at Metro Vancouver hotels 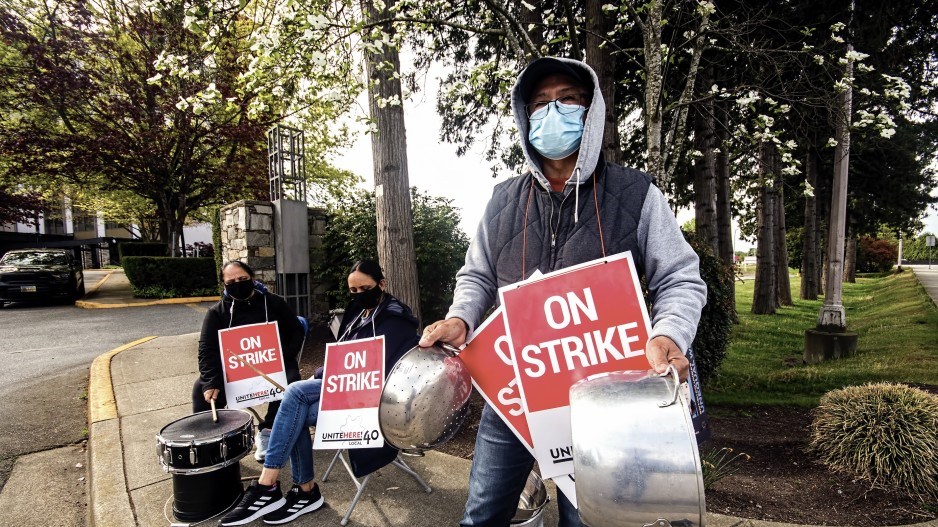 Large unions plan to pull an estimated $2 million in business from the Hilton Vancouver Metrotown hotel, unless a labour dispute at the hotel is settled by the end of June, according to Unite Here Local 40.

The move is the latest salvo in contract negotiations at one of many sites across B.C.

Industry estimates hold that most hotels in the province have been operating at about 20% occupancy for many months.

Operators are busy not only trying to generate sufficient revenue to pay the bills, but also to keep staff happy.

Workers, meanwhile, are anxious about job security as they endure layoffs and terminations, sometimes after having worked in the same job for many years, if not decades.

At the Hilton Vancouver Metrotown in Burnaby, workers – members of the Unite Here Local 40 union – have been without a contract for years, and have been off the job since mid-April.

The union calls the stand-off a lockout, whereas Hospitality Industrial Relations (HIR) labour relations consultant Kevin Woolliams, who represents the employer, told BIV that the situation is a strike.

"The union has refused to set further bargaining dates with the employer," he said. "More than 15 days were offered to the union in May, and the union, as of June 3, has offered no dates in June."

The union, in turn, has said that it is interested in bargaining, has urged mediation and has asked the employer for available dates in June.

The British Columbia Government and Service Employees' Union (BCGEU) confirmed to BIV that its intention was to pull its business from the hotel until January 2023, unless a labour agreement could be reached by the end of June.

The labour dispute in Burnaby is one of many that affect dozens of hotels across the province.

Unite Here Local 40 is involved in a strike at the Pacific Gateway Hotel in Richmond, where 32 workers walked off the job on May 3. The union said the strike centred around "mass firings" and "wage rollbacks" at the hotel that the federal government has been using as a quarantine facility.

Unite Here Local 40 is also representing workers at dozens of hotels, which have ownership groups that use HIR to negotiate contracts.

Fung told BIV on April 30 that approximately 1,200 workers at those hotels and related liquor stores faced potentially being locked out.

Woolliams said no lockouts have been ordered, and that the number of the hotels that are eligible for potential lockouts has declined to 28, from 32.

The biggest issue for the workers at those hotels, according to Fung, is the right to be called back after the COVID-19 pandemic, and not to have the employers be allowed to hire new workers.

Its efforts at the Pan Pacific Hotel, for example, were successful in August 2020.

A vote to unionize at that iconic waterfront destination achieved support from nearly 75% of the 165 workers who voted, in a decision released in February.

That vote means that a union is formed at that hotel. The next step for Pan Pacific workers is to bargain for a contract.

Unite Here also represents workers at Vancouver's Westin Bayshore, Hyatt Regency, Pinnacle Harbourfront and Hotel Georgia hotels. It led strikes at those hotels in bids to get better contracts in the fall of 2019.

Woolliams told BIV that the effect of those strikes was that some longtime regular guests at those hotels were forced to make alternate arrangements.

It also may have made some guests hesitant to book at the hotels. As such, business at some of those hotels suffered following the strike, and that translated into fewer shifts for some workers.

"The impact of the strike at the four downtown Vancouver hotels that were on strike in the fall of 2019 extended well beyond the end of the strikes and, unfortunately for workers at those hotels, continued until the COVID-19 pandemic struck in early 2020," he said.