BCIT Planetarium the place to be Friday night

A makeover of the BCIT Planetarium appears to be paying off. The space was recently renovated by Roundhouse Productions, a laser and light show company that held a 30-year residency at MacMillan Planetarium in Vancouver.
Jan 25, 2017 3:22 PM By: Tereza Verenca 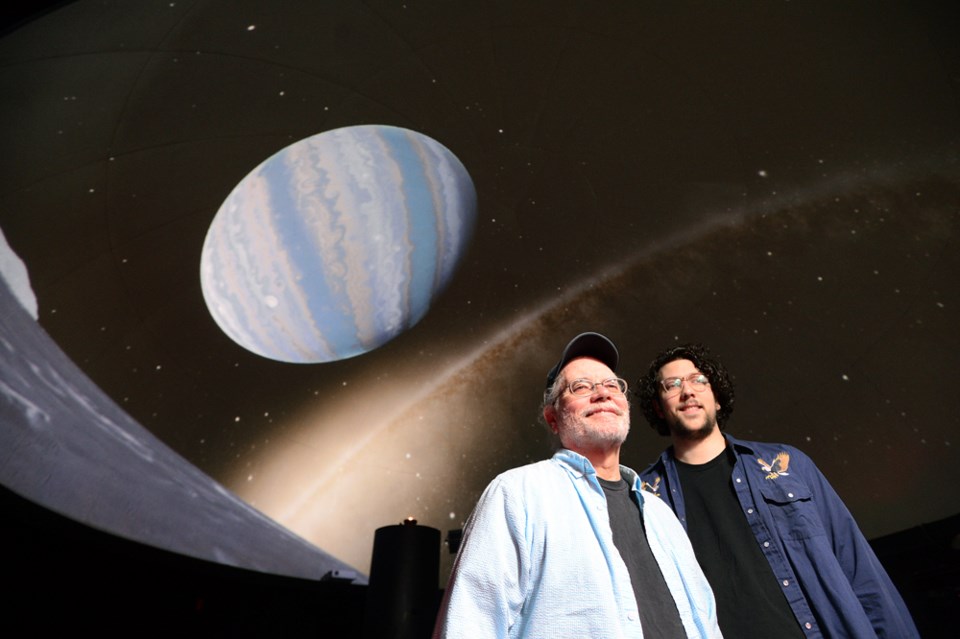 Father-and-son duo Craig and Orion McCaw (right) of Roundhouse Productions are the masterminds behind the light and laser shows currently on at the BCIT Planetarium.Jennifer Gauthier

A makeover of the BCIT Planetarium appears to be paying off.

The space was recently renovated by Roundhouse Productions, a laser and light show company that held a 30-year residency at MacMillan Planetarium in Vancouver.

Shows like Radiohead, Vancouver’s Stars Live and Pink Floyd’s Dark Side of the Moon were huge hits, according to producer and company president Craig McCaw.

“We’ve always had the best attendance in Canada because we were essentially planetarium people who didn’t do just lasers,” he told the NOW.

So when the shows got cancelled in 2012, McCaw knew that wasn’t the end. He heard the BCIT Planetarium wasn’t in use and asked the school if Roundhouse Productions could give it a face lift.

“We thought, gee whiz, it’s pretty, sort of, sterile. Can we approach them and bring all our equipment in? It took about a year and a half to get anybody to pay attention,” he said with a laugh.

“We have sold tons of shows,” McCaw said, noting a new line-up was added at the start of January.

But creating a show is no easy task, he added. They can take between four and five months to produce.

“The guys are sitting there, animating this stuff and rendering it out, so you’ve got a computer with 32 cores, chugging away for a week and a half to give you 15 seconds of imagery,” McCaw explained. “Because it’s full dome video and animation, that’s what takes time.”

The production team first looks at music that isn’t Top 40.

“We look at something where the music has got dynamic range, maybe tells a story; not always about just guys singing about their girlfriends,” said McCaw, adding they’re currently working on a Gorillaz show.

The track is then mixed, followed by many story board meetings.

“The hard part is sitting there looking at a blank white screen and figuring out, ‘What the heck am I going to do?’” McCaw said.

The avid astronomer (he even named his son Orion) has always had a passion for the skies and music. During the late ‘60s and early ‘70s, he played lead guitar, sitar and keyboard for Canadian band The Poppy Family. After the band stopped touring, McCaw went on to play in many more bands.

When he joined the MacMillan Planetarium later on, he held a variety of roles, including special FX design, air brush art and scripting work. He eventually became the de facto resident composer at the planetarium, composing the music scores, recording the narration and mixing the audio for dozens of shows.

Asked what the biggest reward of the job is, McCaw said it’s seeing the smiles on the audience member’s faces.

“To see people enjoying it. That’s what it’s all about. It’s not really trying to get rich, but it’s just having fun,” said McCaw.

Shows at the BCIT Planetarium, which seats 80 people, are on every Friday night until the spring. Vancouver’s Stars and The Hot Universe kicks things off at 7 p.m. (free), followed by Dark Side of the Moon at 8:10 p.m., Radiohead at 9:15 p.m. and Dark Side of the Moon again at 10:15 p.m. Tickets cost $12 each or $22 for two shows on the same night. They can be bought at the door or by visiting roundhouseshows.com. If you’re unsure where the planetarium is, it’s in the SW3 building.