A Burnaby resident has published a first-of-its-kind children’s book for kids who stutter. Kim Block is the author of a new series called Adventures of a Stuttering Superhero , which follows a character named Melissa.
Dec 21, 2016 12:19 PM By: Tereza Verenca 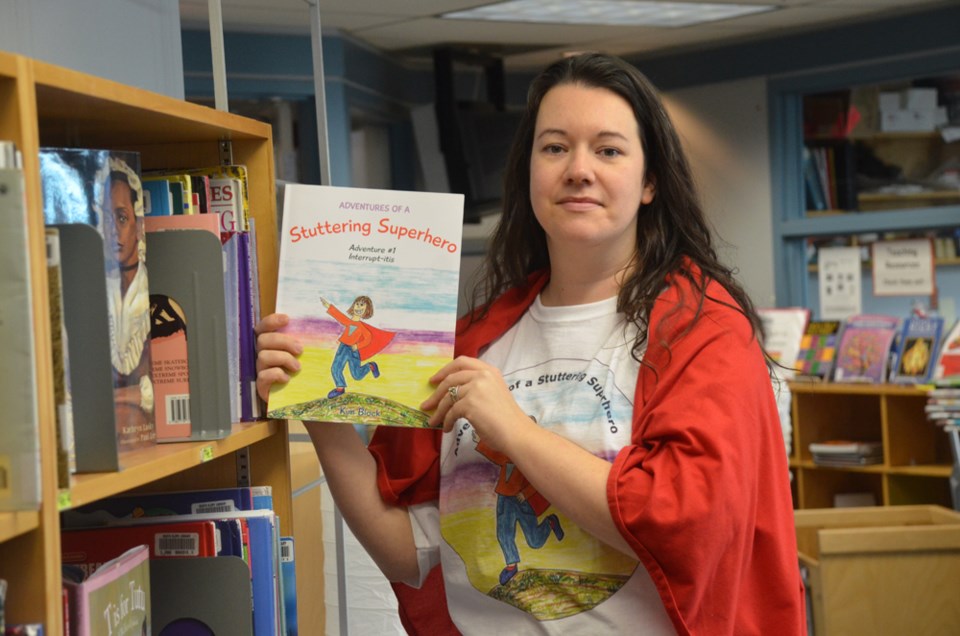 Burnaby resident Kim Block wants to bring awareness to stuttering with her new series, Adventures of a Stuttering Superhero.Tereza Verenca

A Burnaby resident has published a first-of-its-kind children’s book for kids who stutter.

Kim Block is the author of a new series called Adventures of a Stuttering Superhero, which follows a character named Melissa.

In the first book, Melissa tries to find a cure for “interrupt-itis” after a boy in her class won’t stop finishing her sentences. She asks a doctor, a police man and her mom for the cure, but no one seems to know it. Eventually she realizes she never had to find a cure, as it was in her all along.

That’s just one of nine tales and lessons Block – who’s had a stutter her whole life – has planned for the series.

“Stuttering is not talked about at all,” the 37-year-old told the NOW. “There’s still so much misinformation out there.”

The idea for the book came earlier this year. South Slope Elementary School was hosting a community event where community partners were invited to read a story. One Grade 1 class in particular didn’t have a reader, so Block (who works as a secretary at the B.C. School for the Deaf, in the same building) volunteered. A girl in that class also had a stutter, so she thought it would be a good opportunity to read a story on the communication disorder.

But when she asked the librarian if there were any books on the topic, she was told there weren’t any.

“So I read It’s OK To Be Different by Todd Parr, the closest thing I could find,” Block said with a laugh. “I was reading the book and I was stuttering, so the kids were asking questions and I got the unique opportunity to see how this little girl interacted with all of her girlfriends.”

From that point on, she couldn’t stop thinking about the stuttering student.

“I was like I need to write a book for her, so I wrote about three of them and I gave them to her mom. She’s like, ‘We love them,’ and at the time she was like, ‘You should do something with this.’”

Block, who remembers going to speech therapy at the age of four, said her own childhood was stressful.

Throughout high school, she recalls being convinced she was going to be homeless.

“It made no sense to me why I would go to a job interview. Let’s say five people apply to a job, four other people can talk absolutely fine. Why on earth would they hire me?” she said.

When the teacher would ask the class a question, Block would scroll down the list and choose words that she could say with ease, regardless if it was a wrong answer.

And the “little tricks” and “hoops” she’d put her mind through daily would result in an early bedtime.

“Physically and mentally, I was exhausted,” she said.

It wasn’t until she reached her 20s that things changed. She attended a stuttering conference and met a lawyer who also went to bed at 8 p.m.

“I felt so alone, like I was the only person going through this, and here was this man, who was in Florida, in same time zone as me; every night we were going to bed for the exact same reason,” she said.

Block hopes Adventures of a Stuttering Superhero not only creates empathy in children and is read by non-stuttering kids, but becomes a go-to book for teachers, librarians, speech language pathologists (SLPs) and everyday families.

Often times, kids who stutter aren’t seen by SLPs because they’re low on the priority list, according to Block. And speech therapy classes can cost upwards of $110 per hour.

“There’s no cure for stuttering. This is years. This is not like you go for six weeks and then it’s done, so how’s a family going to do that? There’s all these kids out there who stutter who are not being serviced by SLPs; there’s nothing to connect any of these kids,” she said. “All these kids are going through this torturous event of childhood and childhood is hard enough. It’s because of other people’s behaviour or their responses and choices, and the only way to change that is to talk about it.”

For more information, visit www.stutteringadventures.com. The first book is now available online at Amazon and Chapters/Indigo.

Burnaby move to replace culvert hailed as bold step to help fish travel
May 9, 2021 9:13 AM

Anti-Asian racism rallies set for Monday at three Burnaby locations
May 9, 2021 8:56 AM

Opinion: This is how even young people are destroying their hearing
May 9, 2021 8:38 AM
Comments