Samuel has faced much heartbreak, but a local organization has done its part to help
Nov 28, 2018 11:46 AM By: Kelvin Gawley 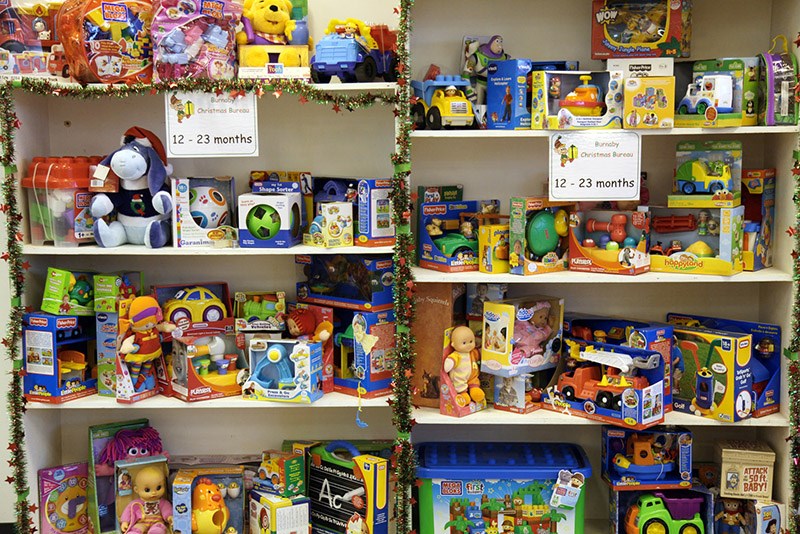 Help fill those shelves with toys next week. The Hilton, Scotiabank and Burnaby firefighters are teaming up to host a pancake breakfast for the Burnaby Christmas Bureau on Thursday, Dec. 5.Jason Lang/BURNABY NOW

Samuel, 11, has faced more challenges, heartbreak and upheaval than most adults – but ever since he came to Burnaby, the Christmas Bureau has been a reliable annual comfort in an otherwise difficult life.

Samuel was a baby when his father died. His mom found new love in Toronto, where they moved when he was four, but her new partner became abusive and they were forced to leave. They spent much of the next two years in Toronto shelters before moving to Burnaby in 2013.

That was the first year Selina Zhou, a Burnaby school district settlement worker, connected Samuel and his mom with the Christmas Bureau.

“As soon as I met them, I found this family was really in need,” Zhou said.

The bureau provided some gifts for Samuel and connected the pair with a sponsor family that provided some basic household necessities.

Samuel’s mother worked hard to establish a new life for herself and her son in Burnaby but the heartbreak wasn’t over for the young student and new Canadian. His mom died in 2015.

Samuel’s mom was otherwise young and healthy, but worn down by her difficult life, Zhou said.

With no family in the country, Samuel lived for a short time with a temporary guardian before his aunt came from China. His aunt, now a permanent resident, spoke no English and is just now looking for full-time work as Samuel is in Grade 6 and more independent.

Through all of this, the Christmas Bureau and Burnaby Community Services have been reliable sources of help, Zhou said. The family has received shoes, clothes and bedding from the bureau, she said.

"Canada is such a lovely, friendly and welcoming country," Zhou said, translating the text.

“She (Samuel’s aunt) said she will try her best to raise Samuel to let him realize how the community is treating them, and hopefully in the end Samuel can turn out to be a good person and contribute back to the community,” Zhou said.

And they’re not alone. Zhou said all the settlement workers in local schools connect newcomer families to the bureau every year.

“All the families who get the benefit really appreciate it and they said it's such a nice gesture,” she said. “They say 'Oh, Canada is so warm and nice. People are so welcoming.’”

There are many ways you can help families like Samuel’s through the Christmas Bureau.

Visit bbyservices.ca/donate.php to see the many ways you can give money.

You can drop off a new and unwrapped toy at the Toy Room at Brentwood Town Centre (Monday to Saturday, 10 a.m. to 4 p.m. until Dec. 21 or during the open house from 5 to 9 p.m. Thursday, Dec. 6). You can also bring a gift to the Burnaby Firefighters’ Pancake Breakfast at the Hilton Vancouver Metrotown Hotel on Friday, Dec. 14.

You can also host an Angel Toy Drive at your workplace. To learn more, visit bbyservices.ca/programs-christmasbureau-donors.php or call MJ at 604-292-3902.