New Westminster and Burnaby are once again going toe to toe for a golden shoe in the Walk30 challenge.
Apr 3, 2019 10:05 AM By: Theresa Mcmanus 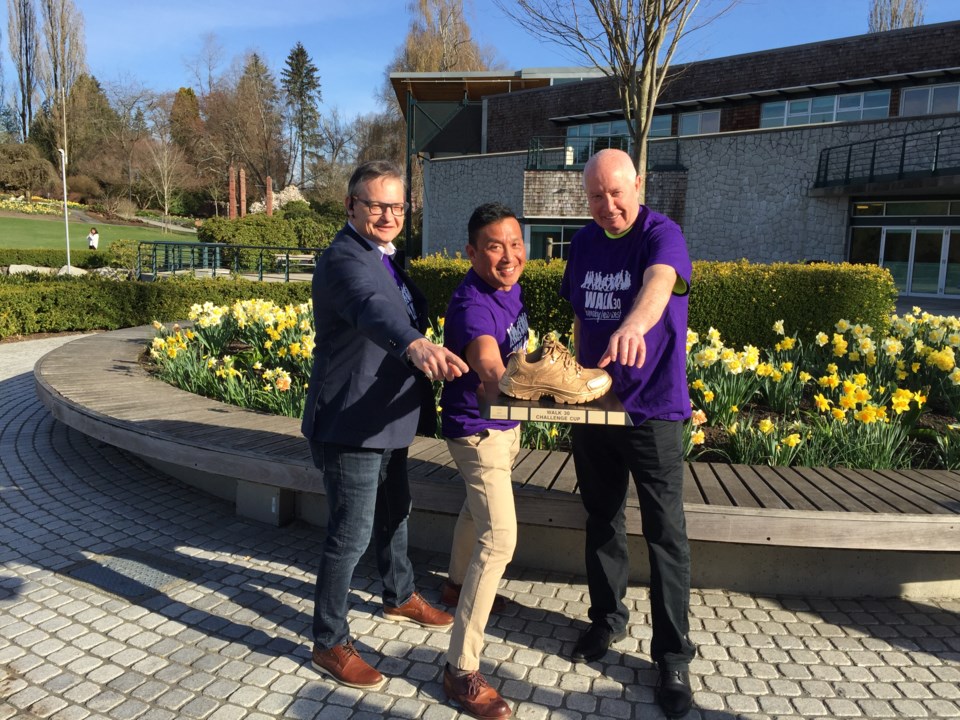 New Westminster and Burnaby are once again going toe to toe for a golden shoe in the Walk30 challenge.

This year marks the second time the neighbouring cities have taken part in the Walk30 Burnaby/New West challenge to promote walking as a convenient form of transportation and to encourage people to rethink how they get around in their communities. The goal is to encourage students and community members to walk 30 minutes a day, which can be split up throughout the day or done at once.

“The very first year we held the competition it was just a New West thing. The second year we got a big grant from Fraser Health and we were able to expand into Burnaby. This year, Burnaby is onboard again so it’s a competition between New Westminster and Burnaby,” said Reena Meijer Drees, a member of the New Westminster Walkers Caucus. “We have an official trophy now which is a spray-painted gold shoe.”

The challenge is divided into two divisions – a schools division and a community division, with the community winner being selected on a per capita basis because New Westminster’s population is much less than Burnaby.

“The trophy was for the community division – New West won that,” said Meijer Drees.” The school piece was won by Burnaby handily.”

During the five-week challenge, people track the number of minutes they walk, but there’s no need to walk long distances or to walk every day.

“You get to choose which city you want your minutes to go to – Burnaby or New West,” said Meijer Drees. “You don’t have to live or work in these cities. We have got people who have signed up, friends from across the country – there’s one team called Team Come from Away; they have a bunch of people out on the East Coast and they are contributing to New Westminster points.”

Officials from New Westminster and Burnaby gathered for a media launch of this year’s challenge on April 2 at Shadbolt Centre in Burnaby.

“Taking the steps toward a healthier lifestyle is a great move for personal health and helps keep the air clean, too,” Burnaby Mayor Mike Hurley said in a press release. “I hope everyone finds a way to fit more walking into their days.”

Between April 8 and May 10, registered participants will track and share their walking minutes online.

“We’re proud to continue our support for Walk30,” said New Westminster Mayor Jonathan Cote in a press release. Walking is such as great way to get around, allowing people to get to know their community, to improve their health, and save money on transportation costs. We hope the Walk30 Burnaby/New West walking challenge will continue to increase walking in our communities.”

Aside from bragging rights, Hurley issued another challenge to New Westminster at Tuesday’s launch, with the mayor of the “losing” city having to serve a meal at a location of the other's choosing. If New Westminster wins the community challenge, Hurley will serve a meal at the Union Gospel Mission in New West; if Burnaby wins, Cote will serve lunch at South Burnaby Neighbourhood House.

Schools, companies and organizations are invited to form classroom or staff teams and challenge other teams to see who can walk more.

For more information or to register for the Walk30 challenge, go to www.walkerscaucus.ca/walk30-burnaby-newwest.