A tiny, shy, endangered species of fish was recently spotted in the Brunette River. And there’s photographic proof.
Sep 15, 2017 9:07 AM By: Tereza Verenca 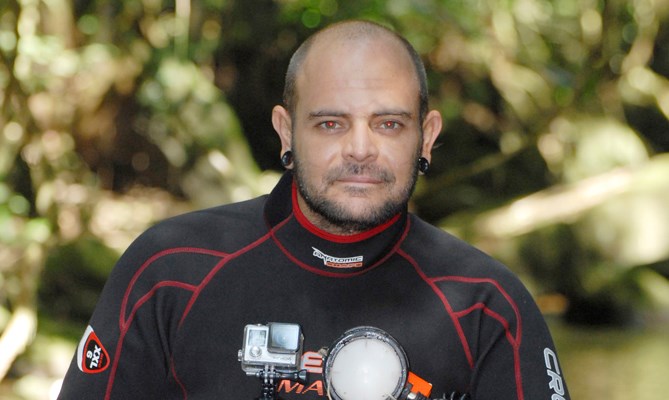 Photographer Fernando Lessa captured the shot while working on a photographic project on salmon.Contributed

A tiny, shy, endangered species of fish was recently spotted in the Brunette River. And there’s photographic proof.

Photographer Fernando Lessa and biologist Mike Pearson were exploring the river while working on a salmon project when they encountered the rare fish.

From Aug. 16 to 18, Lessa and Pearson came face to face with around a dozen Nooksack dace, a small, freshwater minnow that grows to less than 15 centimetres in length. The fish has a rounded back, flat underside and long snout that overhangs its mouth. The species is greyish-green in colour and can only be found in four Canadian waterways, including the Brunette River.

“They’re primarily nocturnal, so you don’t see them a lot during the day,” said Pearson. “They tend to live in turbulent waters, so they’re very hard to observe above the water.”

He added he was “encouraged” to see the Nooksack dace, given the construction mishap in Burnaby in October 2015, when a large amount of sand and sediment spilled into a fish-bearing creek. He also pointed to the train derailment in January 2014, when several cars went off the tracks and coal spilled into a local waterway.

“(Nooksack dace) are very sensitive to any sediment because they live down in the spaces between the rocks. When those spaces are filled up, it’s bad for them,” said the biologist.

Other threats include the physical destruction of habitat, including channelization, dredging and infilling. Beaver ponds, chemical spills and seasonal lack of water can also harm the fish.

The Nooksack dace was listed under the Species at Risk Act as endangered in 2003.

“We know they’re there, we believe they’ve always been there, but we really don’t have a good idea of how many there are or what the population trends are,” said Pearson.

Efforts by local streamkeepers over the years to beef up the fish population have definitely helped, though, he added.

Pearson, who’s based out of Agassiz as an independent consultant, was contacted by Lessa.

Armed with a degree in biology and a master’s in photography, Lessa has been documenting the salmon population in Metro Vancouver through pictures for the last 10 months. (He and his wife moved from Brazil to North Vancouver for a better life.)

Working alongside local researchers, he hopes to show people that they don’t need to travel to places like Alaska to see a salmon run.

“(Here), it’s so close to them, and it’s really beautiful. The river gets full of fish, and there’s a lot of things happening,” said Lessa.

He’s been to 18 rivers and creeks so far, he added, including Stoney Creek, Byrne Creek and Eagle Creek.

The goal is to compile enough photos for an exhibition and, ultimately, put them into a book.

“That will be the second step. It’s a new country. In Brazil, we almost have no wildlife photography. It’s super hard. It’s not even getting published because there’s nowhere to get published,” he said.

As for spotting the Nooksack dace, Lessa told the NOW “it’s really nice.”

“I came from a Third World country, so I’ve seen rivers die, but I’ve never seen any rivers recovering.”

Lessa's photos will be on display at the Burnaby Village Museum (6501 Deer Lake Ave.) on Sept. 24 as part of the World Rivers Day celebrations.