Without the support from the B.C. Centre for Ability, Marlene Jan is confident she would have racked up the equivalent of four mortgages by now. Jan’s daughter, Vivien, was born with a rare heart disease.
May 23, 2017 10:59 AM By: Tereza Verenca 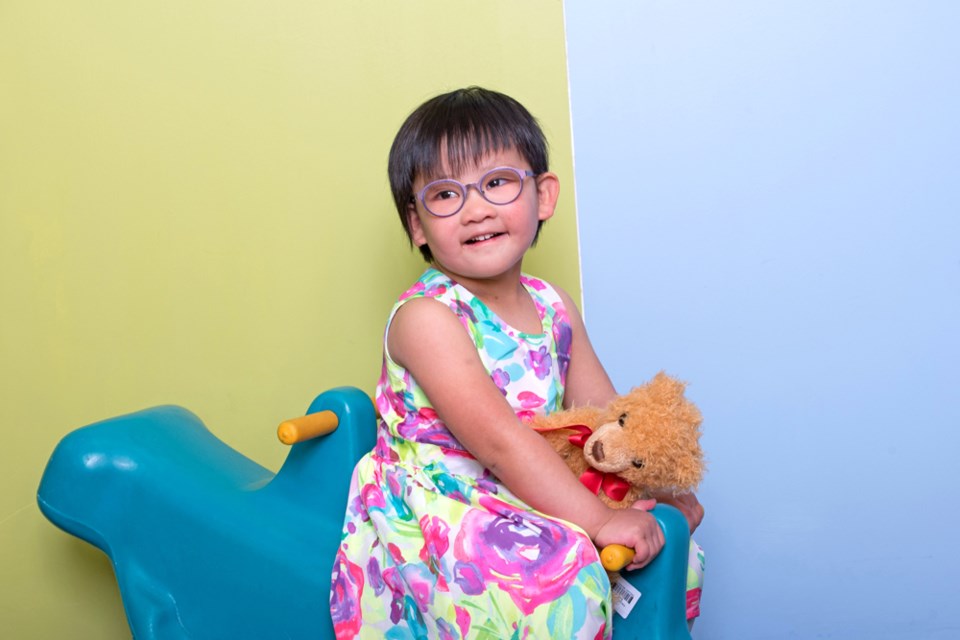 Vivien Yip, will be honoured as a Hero of Ability during the B.C. Centre for Ability’s 18th annual Dining for Dreams Gala on May 25. The now-four-year-old was diagnosed with a rare heart disease when she was born and has received multiple therapies to overcome her obstacles.Contributed

Without the support from the B.C. Centre for Ability, Marlene Jan is confident she would have racked up the equivalent of four mortgages by now.

Jan’s daughter, Vivien, was born with a rare heart disease. Her initial diagnosis also included a kidney malformation and something known as butterfly vertebrae, a backbone anomaly. She was in the hospital for 16 days before she was brought home on Christmas Day, 2012.

“It was clear she had some feeding problems,” Jan says of her now four-year-old. “She had a feeding tube ... and she continued not to do well. Basically, her diagnosis was failure to thrive. She wasn’t growing; she was malnourishing herself.”

The Burnaby family quickly realized the feeding problem wasn’t going away, so Vivien was put on a waitlist to get a feeding tube inserted in her stomach.

That’s when the B.C. Centre for Ability entered the picture. Since 1969, the centre has provided services that enhance the quality of life for children, youth and adults with disabilities. In Vivien’s case, she was given an occupational therapist to work with her on her feeding habits.

“We worked with the occupational therapist intensely just to baby-step everything you or I would take for granted when eating – swallowing, where to place it on your tongue, moving the food around,” says Jan, noting Vivien ditched the tube at nine months old.

At the same time, however, Vivien showed signs of gross motor delay and couldn’t sit up. B.C. Centre for Ability also provided Vivien with a physiotherapist to help teach crawling and standing. She walked for the first time at 26 months old. A speech therapist was also brought on board.

Vivien has been seeing each therapist once a month since she was nine months old.

“It has meant everything,” Jan says of the centre’s services, all offered at no charge. “You have extended health, but it only covers maybe one or two visits at best. ... They put her on the path to have the life skills she needs to fully function in life.”

Jan admits, at first, she figured her daughter had some medical issues, not that she was a special needs child.

“It’s like you’re in a room, and the dimmer light comes on slowly. You don’t really know it right away. For the first little while you think, ‘Maybe she’ll get caught up,’” Jan explains. “It was a bit of process with acceptance, realizing that, and then celebrating it. They’ve (the centre staff) have kind of been there through that process, and sort of mentored us through it, and just behaved like it was completely normal.”

Today, Vivien is a “social and charming” kid, “a total extrovert” who’s curious about the world.

On Thursday, May 25, she’ll be honoured as a Hero of Ability during the B.C. Centre for Ability’s 18th annual Dining for Dreams Gala. Vivien is one of five people being recognized for her resilience in everyday life and her ability to inspire others to reach for the sky.