Get on the beaten path 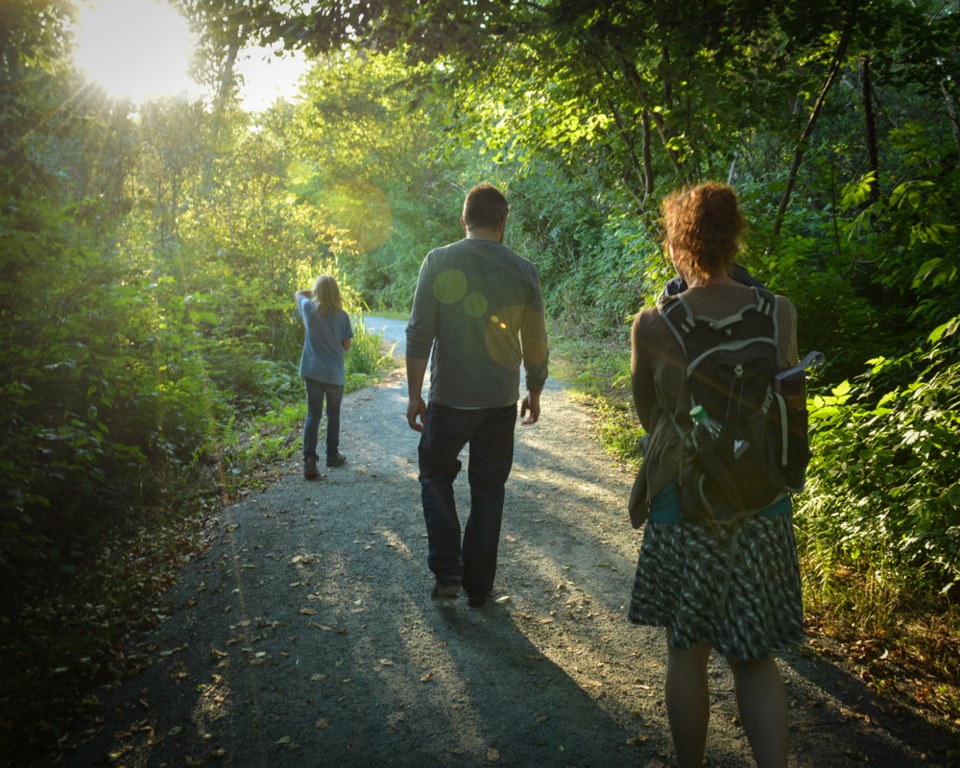 The City of Burnaby is filled with many parks and nature trails that are waiting to be explored.Stephen Hui

When locals think of hiking destinations, Vancouver’s North Shore, Squamish and the Fraser Valley most likely spring to mind. However, Burnaby boasts a selection of easy hikes and nature walks that have the advantage of being close to home, kid-friendly and transit-accessible.

Summer is as good as any time to hit these trails, which lie in the territories of the Tsleil-Waututh, Musqueam, and Squamish First Nations. Here’s five recommended hiking and walking spots in British Columbia’s third most populous city.

Officially named Mount Burnaby, the site of Simon Fraser University’s main campus rises 370 metres above Burrard Inlet. In geomorphological terms, Burnaby Mountain is a cuesta of tilted sedimentary beds, with a north-facing escarpment characterized by cliffs and steep ravines. Sightings of black-tailed deer are not uncommon in this forest of western redcedar, western hemlock, bigleaf maple and red alder.

On foot: The Velodrome Trail is a sweaty way to sample the mountain’s delights. Climbing 240 metres over 1.4 kilometres, Burnaby’s answer to the Grouse Grind features 500 stairs. The Pandora Trail continues up to the Ainu wood sculptures of Kamui Mintara (Playground of the Gods). From there, the Trans Canada Trail enables a variety of loops, so you can spend hours hiking in the Burnaby Mountain Conservation Area.

By transit: TransLink bus 160 stops outside the Harry Jerome Sports Centre on Barnet Highway, where you can pick up the Velodrome Trail.

Flowing from Burnaby Mountain to the Brunette River (a tributary of the Fraser River), Stoney Creek gets its name from its rocky stream bed. It’s a local environmental success story, with years of habitat restoration efforts paying off in the return of chum, coho and pink salmon.

On foot: From North Road, you can follow the creek 2.4 kilometres south to Government Street, passing through Stoney Creek and Eastlake parks and ending up on the Burnaby Mountain Urban Trail. To extend your walk, continue downstream on the Brunette-Fraser Regional Greenway, which covers 2.2 kilometres in the Brunette River Conservation Area.

By transit: The North Road end is walkable from the SkyTrain’s Burquitlam station in Coquitlam. Bus 101 services the Government Street end.

Fed by Still Creek and drained by the Brunette River, Burnaby Lake is truly the heart of the city. Both the lake and the Central Valley are the products of glacial erosion during the Pleistoceneepoch. Wildlife watchers will want to keep an eye out for great blue herons, northern flying squirrels, Pacific tree frogs, pied-billed grebes, red-winged blackbirds and western painted turtles.

On foot: Make the most of your visit to Burnaby Lake Regional Park by circumnavigating its centrepiece. Points of interest on the 10-kilometre Burnaby Lake loop include Cariboo Dam and the Piper Spitboardwalk and viewing tower.

By transit: To access the loop from the Sperling-Burnaby Lake station, cross the pedestrian overpass, walk south to Sperling Avenue and enter the park.

Once a tidal slough, Deer Lake is now the site of Burnaby’s cultural precinct. The rewards of a stroll at Deer Lake Park range from art shows and heritage buildings to meadows and songbirds.

On foot: A 5.6-kilometre loop allows you to sample much of what the park has to offer, including a viewing tower and a beach. The Burnaby Art Gallery, Shadbolt Centre for the Arts and the Burnaby Village Museum lie northeast of “Little Lake.”

By transit: Bus 144 conveniently stops on Deer Lake Avenue, outside of the Shadbolt Centre.

Twenty-five years in the making, the Trans Canada Trail (TCT) is a 22,000-kilometre network of multi-use trails connecting coast to coast to coast. The North Burnaby section of the TCT offers a grand tour of the parks along Burrard Inlet between Vancouver and Port Moody.

On foot: Hiking west to east, you’ll pass through Second Narrows and Confederation parks, and the Capitol Hill and Burnaby Mountain conservation areas. Over 13 kilometres, the setting of “The Great Trail” alternates between serene woods and suburban streets.

By transit: The west end of this section is accessible from North Boundary Road, which is serviced by community shuttle C1. Near the Burnaby-Port Moody border, bus 160 stops where the TCT crosses Barnet Highway at the Suncor Energy terminal.

Stephen Hui is the author of 105 Hikes In and Around Southwestern British Columbia, which will be published by Greystone Books in 2018. Follow him on Twitter and Instagram: @StephenHui.