What happens when you gather 11-year-olds from around the world and put them together for a month of activities with a socially responsible focus? You help foster the next generation of global leaders, ready to take on the world.
Nov 2, 2015 3:01 PM By: Jennifer Moreau 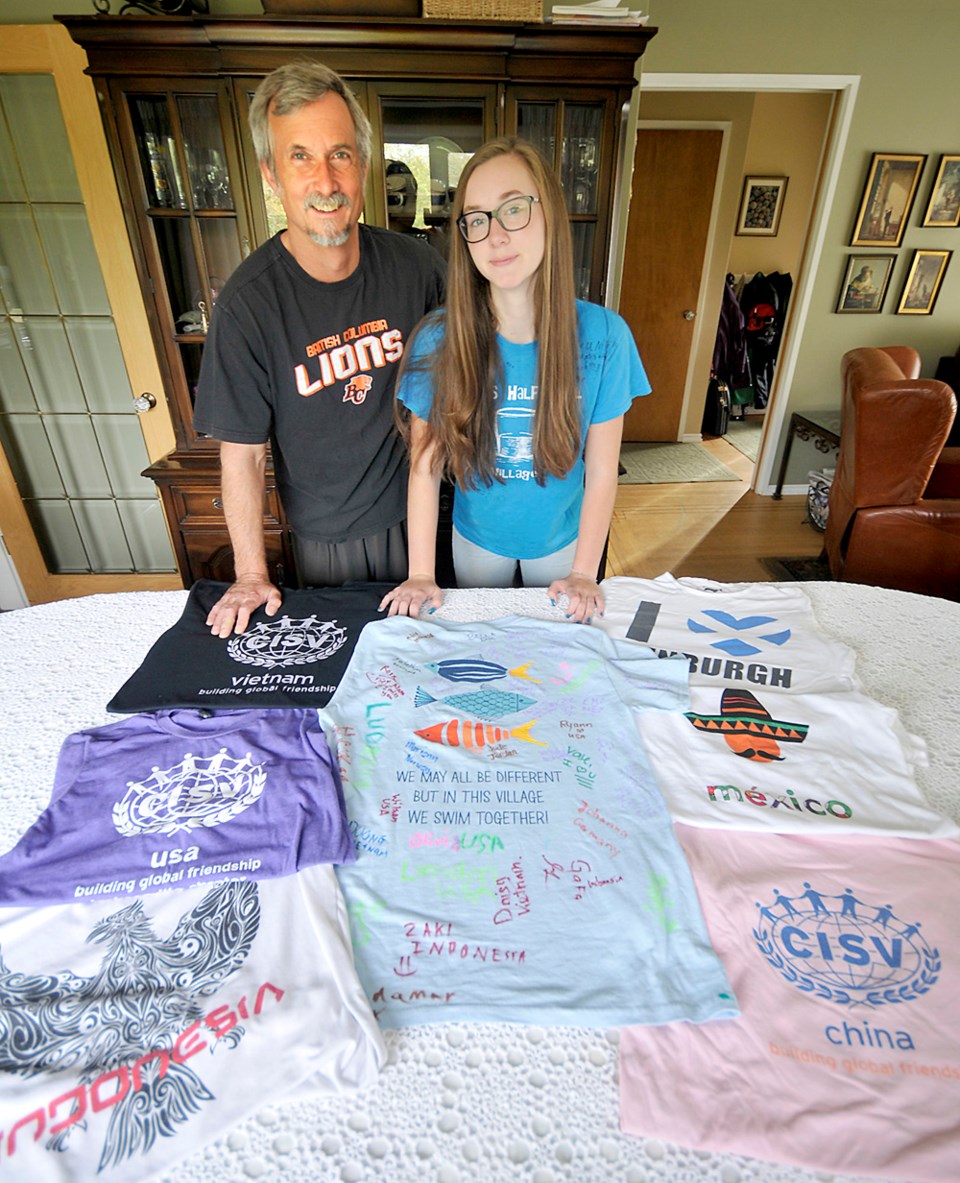 Nicola Cech, 13, with her dad Peter, who has sent both of his daughters to CISV villages to meet kids from around the world. The two are showing off a collection of T-shirts from various past villages.Chung Chow

What happens when you gather 11-year-olds from around the world and put them together for a month of activities with a socially responsible focus? You help foster the next generation of global leaders, ready to take on the world.
At least that’s the idea behind Children’s International Summer Villages, a worldwide network that hosts month-long “villages” designed to create strong, global citizens.
Burnaby parent Peter Cech is such a supporter of the concept he’s sent both of his daughters to international villages, where child delegates get to know other children from around the world.
They spend four weeks together, playing games or completing activities centered on diversity, human rights, conflict and resolution and sustainable development.
The Burnaby NOW caught up with Cech and his 13-year-old daughter Nicola to hear about their thoughts on the CISV camps.

Tell me about this camp:
Peter: CISV (Children’s International Summer Villages) villages have been held since 1951 with the idea that bringing youth from around the world together would lead to a more peaceful and just world.
Our daughters have both attended villages; Nicola in 2013 Fredericton N.B. and Naomi this past summer in Jacksonville, Florida.
They were each part of a delegation of four 11-year-olds representing Canada with an adult leader. Delegations from 12 countries spend a month together as a village.

Who organizes all of this?
Peter: CISV villages are organized and run by volunteers, many of whom attended villages themselves when they were younger.
Host chapters provide brief homestays, sometimes meals and even laundry service.  The Vancouver CISV chapter hosted a seminar camp for youth ages 17 to 19 last summer, and will host a village here in 2017.
That’s how the 70 CISV Chapters around the world make these programs possible, by hosting programs locally so that local youth from 11 to 19-plus can attend international programs.

Why did you want your daughters involved?
Peter: What convinced us that it would be good to let our kids attend villages at 11 years of age was the young men and women we met who had already participated in CISV programs. All CISV programs revolve around one of four themes: diversity, human rights, conflict and resolution and sustainable development. Youth explore these themes and build their leadership skills in the process.

How do parents get involved?
Peter: The best way for parents to get involved in CISV is to have their kids ages 10 and up attend a mini-camp. The kids will get a sense of the types of activities they’ll find at a village and other CISV programs.  New parents will have a chance to meet us and, more importantly, meet youth that have already been involved in CISV for some time now.

What did you think about this camp, Nicola?
Nicola: Deciding to go to my village two years ago was probably the best decision I’ve ever made. While the experience itself was mind-blowingly amazing, the sort of community we built is something most people will never experience in their lives.

What did you learn?
Nicola: I think the most prominent thing I learned was how to be myself. In a large group of people from such distinct backgrounds, the easiest way to show how you live is by acting like you would every day. Coming away from it, I think I understand a whole lot more about how different places in the world function, and just the fact that they exist. Countries aren’t just names to me anymore, I can say I know people who live in, say, Ecuador.

What do you remember the most about it?
Nicola: I’ll never forget what it felt like to walk out of that camp. The bonds I’d created with people I’d have never met otherwise are so strong. We’d created a community that’s indescribable, but completely incredible.

Would you recommend it to other kids?
Nicola: How could I not recommend it? Children not having this opportunity just because they haven’t heard of it seems crazy to me. It’s completely life-changing, which is hard to comprehend if you haven’t experienced how much it alters you as a person. I came back more confident, more literate, and readier to face whatever life is going to throw at me.


The next Lower Mainland mini-camp will be in January. For more info, go to the website at www.cisvvancouver.ca.