'I was one of the lucky ones' 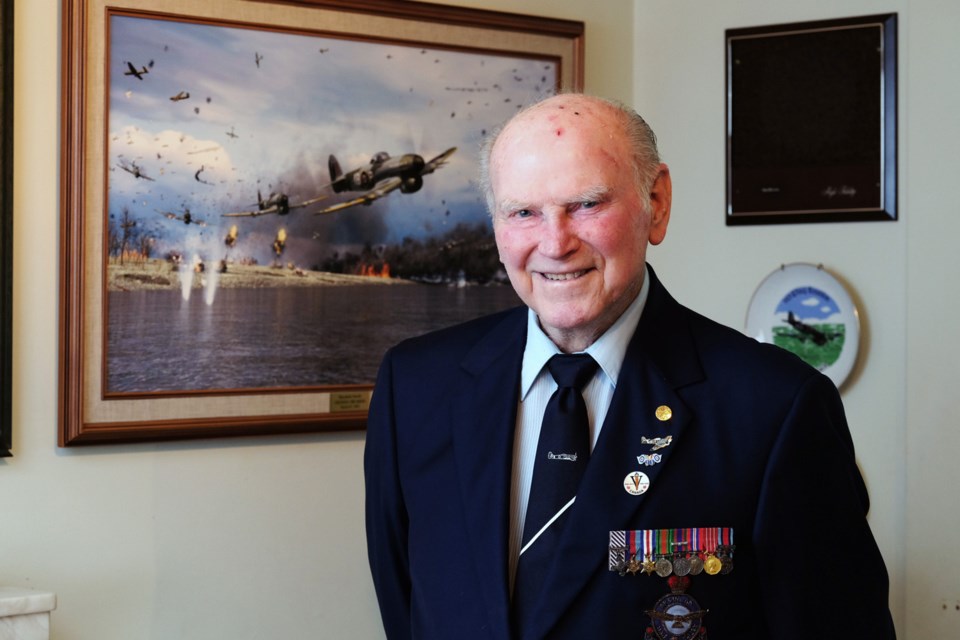 Distinguished: Harry Hardy, 92, served as a Typhoon pilot on the front line during the Second World War. He survived 96 missions from the Invasion of Normandy to the Crossing of the Rhine.Larry Wright/BURNABY NOW

Tucked away in a small home south of Rumble Street lives a man who recently received one of France’s highest award – the Legion of Honour medal.

Hardy was recently awarded the French Legion of Honour medal by the French government for his role in D-Day. He was one of 390 D-Day veterans from Canada to receive the medal.

Originally from Timmins, Ont., Hardy enlisted in the air force when he was only 21 years old. Shortly after he enlisted he was sent to Vancouver Island for training, and on Jan. 1, 1944 he was sent overseas to England to complete another three months of training before beginning his mission in France and Germany.

Over the course of seven months, Hardy flew 96 missions in a Typhoon, a close army support plane that assisted the troops on the ground.

The NOW was fortunate enough to sit down with Hardy recently and hear first-hand what it was like fighting in the Second World War.

Why did you enlist in the air force?

You didn’t dare not join – you knew how it was, everybody your age was in the service, so when you got that age you had to go. I don’t think we knew anything about patriotism or anything when we were 19, we just went and joined up.

What was it like learning to fly fighter planes?

It’s just like every kid that learns to fly, it’s a great thrill to be able to solo – that’s what you call it. When the instructor says you can solo you know you’ve made it. Lots of guys don’t make it that far. … I flew 14 different types of airplanes during the war. When you’re a pilot you just get in – they all fly the same. Don’t matter what (kind) they are, as long as you know where the throttle is and the stick is, you’ve got it made.

What kind of plane did you fly overseas?

I was a Typhoon pilot. I flew the Pulverizer, that was the name of my plane. The Typhoon was a close army support plane, you attacked all the trucks and tanks and everything on the ground, you didn’t fight in the air that was Spitfires’ job up there.

We were on the ground, that’s what the Typhoon was built for. You’d go down and you’d be doing about 350 mph. … The Typhoon is a little bit different than a Spitfire. It weighs seven tonnes and you’ve got 2,200 horsepower and the propeller is 14 feet in diameter with four big blades on it. So it’s a monster of an airplane. It packs a big load. You’d have a thousand pound bomb under each wing, and four cannons with 560 rounds of 20 millimetre cannon shells, three-quarters-of-inch thick. We had a heavy load.

What happened when you arrived in Europe?

As soon as you land there, they assume you don’t know anything so they give you a fighter pilot’s course for three months where you learn all over again on Spitfires. Every fighter pilot takes the three-month course and learns the English way of doing things, and then you’re ready to go into action.

I was one of the lucky ones. A lot of (Canadian) boys went over there and they put them into English squadrons, the RAF (Royal Air Force), but when I got there we had our own Canadian squadron so they needed pilots in the Canadian squadron. … They were preparing us for D-Day, but we didn’t know that, we were just ordinary pilots. Drunk in the mess every night and flying all day. They were getting us ready for the invasion so that’s why they put us all on Typhoons and took us off the Spitfires, which we loved – everybody loved the Spitfires.”

What was it like flying in your first mission?

The first mission, you don’t really know very much. The leader always has you as a wingman on the first mission. We went over and the Battle of Normandy was on, and … I was looking down and it was all dust and smoke down there, I couldn’t even see what the target was. As soon as he knew what the target was, he’d start leading us down, and I watched him launch his bombs with one eye and my gun sights with the other eye, and when he dropped his bombs I dropped mine. I didn’t even see the target. You don’t know what you’re doing, so you just go down with the boss and that’s how the first one was.

Tell me about the other missions you flew.

I was the replacement for a guy who was killed. He was killed on August the 8th and I arrived on August the 10th, and I got his airplane. … I flew all the way from Normandy right into Germany. That was the last big battle I flew in – the crossing of the Rhine. ... We crossed it on the 24th of March (1945). It was quite a battle. We lost 29 Typhoons on that trip. We started with 300, and before the battle was over we’d lost 29.

What happened if you got separated from your squadron?

You’d have the map on your knee and you’re looking at the ground and if the ground doesn’t look like the map, you’re lost. Only once was I lost … We were way inside of Germany, and we were doing a job in there. Somehow or other I got separated from the squadron, and then I had to find my own way home. So I called …but what happens to me is the Germans come on. He talks to me and gives me a vector to fly, and he’s sending me to the Ruhr ... and I thought, ‘Gee that course doesn’t take me home, I’m west of here.’

Then I called the radar up again and the radar hooked in on me and they told me to make my cockerel crow to see if I was friend or foe. The cockerel ... is a signal you send out. You turn your key on and it sends this special signal out that our radar can pick up. So they picked up my signal, and they gave me a course to fly home that made sense.

The guys that flew in the war, that was the best times of their life. You had no responsibility, the government looked after you, you were well paid compared to everybody else – only the Yanks were paid better than us – good food. Everybody was in for four years, that’s all it took to train you and do your bit.

After the war, Harry Hardy retired form the air force and returned to the West Coast to marry a woman he’d met years earlier.

They eventually settled in Burnaby, to be near her family, and had two daughters who, he laughs, were very prolific because they gave him so many grandchildren.

In January, Hardy was officially awarded the Legion of Honour medal at a ceremony in Vancouver. While the veteran looks back on his time in the air force with pride, he says he avoids going into too much detail with people who haven’t served.

“We don’t go into all the gory details, that’s just for us (veterans) over a pint at the Legion,” Hardy said with a smile.