The Nikkei National Museum and Cultural Centre is marking 20 years in its Burnaby home with a new exhibition. On Sept.
Sep 24, 2020 12:08 PM By: Now Staff 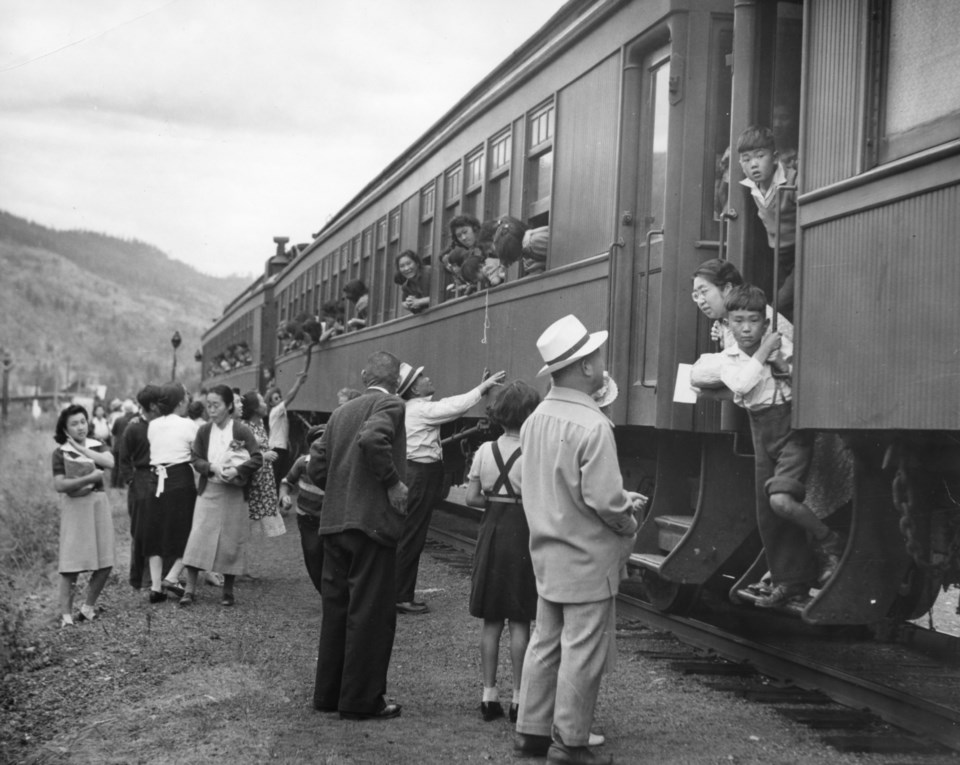 Displaced Japanese Canadians leaving the Vancouver area (possibly Slocan Valley) after being prohibited by law from entering a “protected area” within 100 miles of the coast in B.C. This archival photo is featured in the Broken Promises exhibit opening at the Nikkei National Museum and Cultural Centre on Sept. 26.courtesy Nikkei National Museum and Cultural Centre

The Nikkei National Museum and Cultural Centre is marking 20 years in its Burnaby home with a new exhibition.

On Sept. 26, the centre opens the new travelling exhibit Broken Promises, which is co-curated by the Nikkei National Museum with the Royal British Columbia Museum and the Landscapes of Injustice research collective.

The exhibition is grounded in research from Landscapes of Injustice, a seven-year, multi-disciplinary, multi-institutional project that explores the dispossession of Japanese Canadians in the 1940s.

“It illuminates the loss of home and the struggle for justice of one racially marginalized community,” says a press release from the museum. “The story unfolds by following seven narrators over decades. Learn about life for Japanese Canadians in Canada before war, the administration of their lives during and after war ends, and how legacies of dispossession continue to this day.”

At the beginning of 2020, the Nikkei National Museum and Cultural Centre had envisioned a large 20th anniversary gathering that would also include the Broken Promises exhibit.

The gathering was planned to be held to honour the anniversary of the day the existing centre – then named the Nikkei National Heritage Centre – officially opened on Sept. 22, 2000.

That day marked the culmination of a dream that had been in existence since December 1986, when a small group of people conceived of the idea of Nikkei Place – a multi-purpose complex that would join a national Japanese Canadian cultural centre, seniors’ housing and a care home. A ceremonial groundbreaking and tree planting was held in August 1997 to mark the beginning of construction of a new seniors’ housing facility, the first building on the Nikkei Place campus.

Since the current campus was completed in 2000, it has welcomed hundreds of thousands of visitors for exhibits, cultural programs, festivals and events, educational tours and more.

This year, Instead of a large gathering, the centre instead marked its 20th anniversary with a small celebration – including the ceremonial planting of a pine tree – featuring current board members and guests.

Now it will mark the opening of the Broken Promises exhibition with a virtual event that will include the launch of a Landscapes of Injustice book.

From Sept. 29 onwards, the exhibition will be open 10 a.m. to 5 p.m., Tuesday through Saturday, with COVID-19 protocols in place. Gallery capacity is limited to eight people.

“No one could have foreseen a 20th anniversary year like this one for the NNMCC,” the centre’s website says. “A place that has served as a physical gathering place for our diverse community, NNMCC has faced enormous challenges from government orders for public health. But enormous challenges have also come with opportunities for resilience: for NNMCC to continue modified programming and a sense of community at a time when many other gathering places are unavailable; and to broaden our reach to a worldwide community online.”

The virtual exhibit launch of the exhibition is taking place on Saturday, Sept. 26 from 1 to 2 p.m.

To attend, or for more information, see centre.nikkeiplace.org/exhibits/broken-promises.