Photographer Kayla Isomura sat down with fourth- and fifth-generation descendants to talk about their families' experiences and to ask them with the question: If you had 24 hours to pack up and leave your home, what would you take with you?
Jun 5, 2018 8:05 AM By: Julie Maclellan 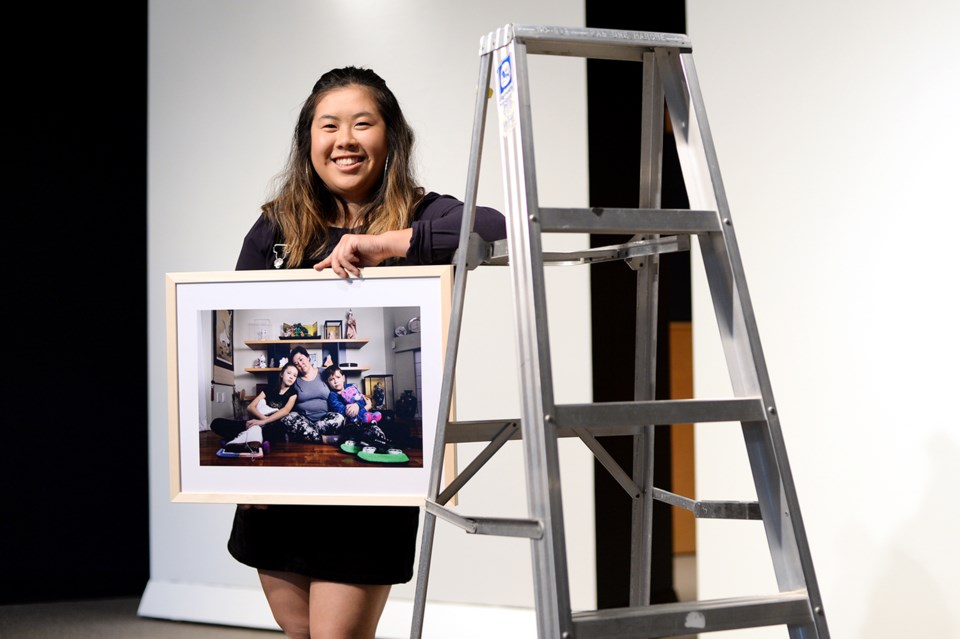 Kayla Isomura with one of the photographs in her upcoming installation The Suitcase Project, opening at the Nikkei National Museum and Cultural Centre on June 16.Jennifer Gauthier

If you were given 24 hours’ notice to pack up and leave your home and belongings, what would you take with you?

That’s the question Kayla Isomura found herself mulling as she thought about her own family’s past. And it’s the question that led her to create The Suitcase Project, an installation set to run at the Nikkei National Museum and Cultural Centre from June 16 to Sept. 2.

Isomura’s mother’s family is Chinese; her father’s is Japanese. As a fourth-generation Canadian, Isomura knows her life is immeasurably removed from the experiences of her grandparents – who, on her father’s side, were part of the Japanese-Canadian internments of the Second World War. They died before Isomura was born.

“I never had the opportunity to meet them or hear their stories,” she says. In fact, she confesses that she didn’t even really know about the internments until about four years ago.

“It’s a pretty common narrative for people of my generation that these stories aren’t passed on,” says the 24-year-old photojournalist.

So she decided to reach out to others of her generation – the yonsei and gosei, fourth- and fifth-generation descendants – to talk more about their families’ experiences and to challenge them with the question: Given the same notice as your grandparents and great-grandparents had, what would you pack?

Working on the project through an internship at the Nikkei Centre, Isomura found participants first through word of mouth – family and friends of friends – then through the Nikkei’s social media channels and organizations that work with Japanese communities on both sides of the 49th parallel.

She ended up with more than 80 Japanese-Canadians and Japanese-Americans taking part, ranging from a four-month-old sixth-generation baby up to people in their early 50s.

For each participant, she sent them the same notice that previous generations had received about the upcoming evacuations and the need to pack. The two countries handled the issue differently, she notes. In Canada, internees were given weight limits (150 pounds per adult and 75 per child), while Americans were limited to what they could carry. In the U.S., internees were also given a list of suggested things to bring along (toiletries and blankets, for instance), while in Canada, it was left open-ended.

Isomura followed suit, giving her participants 24 to 48 hours to put together their luggage.

Then she met them at their homes to take what she calls an “emotional portrait” of them with their chosen belongings and to talk to them about their families’ stories and experiences.

It was a moment, she says, that was missing in the historical research she had done leading up to the project. Her research had led her to plenty of photos of people with their luggage, waiting to board trains en route to internment camps. But she wanted to zoom in on the hours before that, when people were in their own homes, deciding what to take with them.

“That moment when people were leaving their homes: what did it look like?” she says. “And for me it was also thinking about the idea: What are you leaving behind?”

Some common themes emerged in the items chosen by her participants.

Childhood stuffed animals, photos and photo albums, and family mementoes – a grandparent’s pocket watch or special piece of jewelry - were common themes. Activities were another common one – art supplies, books, even ukuleles.

Isomura found that people’s packing choices were influenced by the stories their grandmothers and grandfathers had told them – for instance, those who’d heard about how cold it was took blankets.

Canadians also focused on personal items, she notes, because their grandparents had lost everything.

“In Canada the government sold everyone’s possessions. If you didn’t bring it with you, you didn’t see it again,” she says, adding that wasn’t the same experience in the United States, where some (although not all) Japanese internees had the chance to go home again.

Conversations with the participants opened Isomura’s eyes to both the commonalities of their experiences and the differences.

She discovered, to her surprise, that not everyone’s family had been interned – or, as many say, incarcerated. One participant’s family was in Alberta at the time of the war; they worked with displaced Japanese citizens from the West Coast but were never interned themselves. Some places in the U.S. – including, surprisingly, Hawaii – never experienced internment at all. In another case, a family escaped incarceration because they went into hiding instead, spending three years hiding in a chicken coop in Utah.

“Now I want to know more about this particular narrative,” Isomura says. “It’s become part of a broader discussion, a look at these generations, whether they had the connection to internment or not … sort of reflecting on, ‘What does that mean today, how has that history affected you, played a role in your life?’”

With videographer Mark Yuen, Isomura filmed 19 of the interviews she conducted, and those interviews have been turned into video presentation and audio podcasts on a variety of subjects. They’ll take their place in the gallery alongside 63 still portraits of the participants with their luggage, plus close-up looks at a few particular precious items that Isomura had each participant pick. The whole thing will be accompanied by a catalogue detailing who all the participants and their luggage.

The exhibition will be accompanied by a series of special events throughout its run to set the issue in its historical context. The exhibit opening includes a reading of the play Question 27, Question 28, which looks at the “loyalty questionnaire” the U.S. government gave to Japanese-Americans, through the eyes of female incarcerees.

A number of public programs are planned throughout the summer to accompany The Suitcase Project.

The opening will include a reading of Question 27, Question 28, a play based on the American government’s “loyalty questionnaire” through the eyes of Japanese-American female incarcerees. It’s written by Chay Yew, directed by Tamlyn tomita and features Laura Fukumoto, Jennifer Spence, Genevieve Felming and Yoshié Bancroft.

Yoriko Gillard leads this hand sewing workshop demonstrating how to fix or revive a personal item to reuse and/or wear. Participants are encouraged to bring their own item to mend and a sewing kit.

Unpacking Our Histories: Aug. 4 and 5 (time to be determined)

A cross-generational, cross-cultural conversation will be held as part of Vancouver’s Powell Street Festival.

Photographer Kayla Isomura speaks with videographer Mark Yuen about the exhibition and how it came to be.