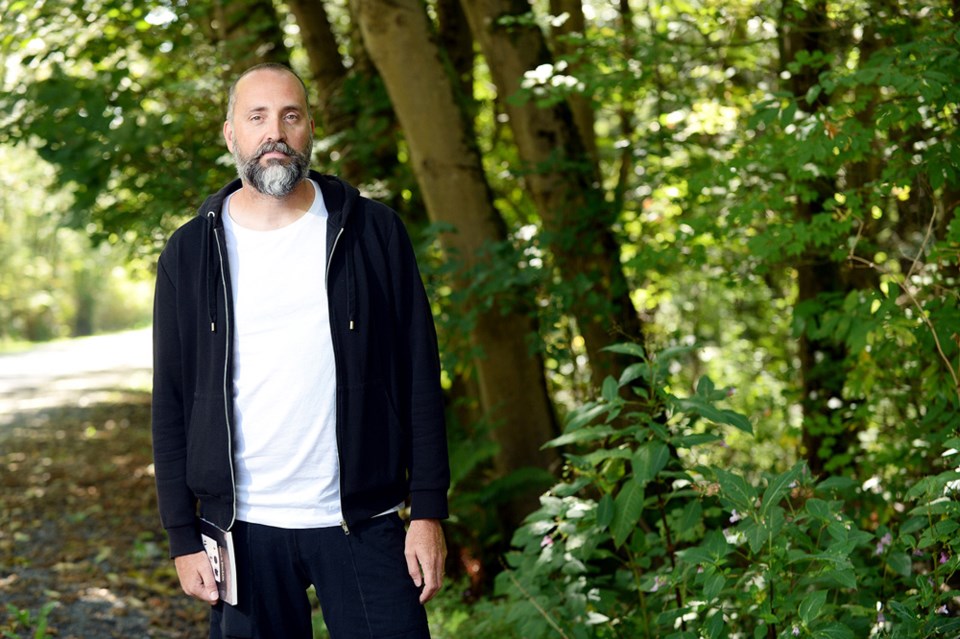 SFU professor Stephen Collis has penned a new book of poetry, Once in a Blockadia, inspired by his experiences protesting the Kinder Morgan pipeline on Burnaby Mountain.Jennifer Gauthier

What happens when a poetry professor gets mixed up in pipeline politics? He gets sued for $5.6 million and then pens a book inspired by the 2014 protests on Burnaby Mountain. SFU professor Stephen Collis was one of the Burnaby Mountain Five, a group of pipeline opponents named in Kinder Morgan’s multimillion-dollar civil suit. The oil company brought the case forward to secure a court injunction against protesters in the fall of 2014.

Collis’ new book, Once in a Blockadia, is a meditation on our relationship to the natural world and how our ability to shape it has ushered in the new Antropocene Era, marked by human activity and its impact on the Earth. Collis also engages Romantic poet William Wordsworth, who wrote about an idyllic natural world that was in reality shaped by people.

Collis will be promoting the book on Monday, Oct. 24, from 6 to 8 p.m. in room 7000 at SFU’s Harbour Centre in downtown Vancouver. He will be joined by SFU molecular biologist Lynne Quarmby, also one of the Burnaby Mountain Five. Collis will give a reading, and Quarmby will speak on the latest developments in climate science. The book will be out on Sept. 9, available in local bookstores and Chapters.

Tell me a bit about the title, Once in a Blockadia?

Blockadia is a term that Naomi Klein has been popularizing. … Blockadia is a term some activists in the States have been using to describe the fact that wherever resource projects go, they cause destruction at a local environmental level, and, of course, they contribute on a global level to climate change. … So the idea of Blockadia is sort of fluid and global, that wherever those companies go, resistance rises up front the grassroots.

What about the book itself?

The book is very contemplative and philosophical. It’s not rally poetry, protest slogan kind of poetry. My own sense is this is an incredibly complicated issue. We’re looking at a world, where more and more we realize, we’ve kind of made a mess. But we also don’t seem to know quite what to do to get out of it. It’s kind of like when you’re in a bad relationship. We’re in a bad relationship with our economy, and it’s kind of abusive, but we have no idea what to do about it. … I find that tension of being in that space, where you’re damned if you do, damned if you don’t kind of thing, very productive, to write imaginatively in that area. …. And also the mindset of people who suddenly go: “You know what? I’m just going to stand up and do something. … I don’t know what else to do, but I know this is wrong and we can’t keep doing it. There are so many regular people right here in Burnaby that had that feeling, right? I don’t know what to do but this is horrible, and I can’t just sit there and watch.

It’s a little bit of that it’s-in-your-backyard situation. … It was easy simply to come down from the hill to where the work was happening and find other people that have simply shown up because they live in the neighbourhood. And we all sort of stood around and said: This is horrible. We don’t think this should be happening. What should we do about it? And suddenly you are organizing, literally from the grass roots up, just with people in the area.

The book description mentions a conversation with the long-deceased poet William Wordsworth. What do you two talk about?

He’s sort of quiet (laughter), being 200 years dead. He’s sort of famous for being a poet that celebrated the natural world and its beauty, etcetera. ….And I think he wrote about it in a complicated and interesting way that’s still relevant. That is the area he wrote from is called the Lake District in England, which today is a very picturesque place. But in his own time, as it is today still, it’s really a working environment. It’s a place where, for thousands of years, people (have herded) sheep over those hills. There’s nothing really natural about it. Probably, 2,000 years ago, it was forested and there aren’t trees anywhere right now. People have absolutely shaped that landscape and yet managed to exist in it in a balanced sustainable way. …They herd sheep and produce wool and produce meat, that sort of thing. To me that’s fascinating. We know him to be someone that celebrated the natural world as this beautiful, pristine place he would go and he’s so inspired by, it was all about a working economy that was sustainable, people could exist in that world. To me that’s a real lesson. It’s almost like going back now, and how do we do this, because we’ve made a real mess.

You mention the Anthropocene Era as well? How does that weave its way into the book?

That’s what it’s all about in a way. … We clearly have this incredible power to affect our environment and in totality the whole planet. We can step back from that and look at it, like: Holy smokes, can we affect it in a good way? Can we affect it in a positive way on that massive of a scale? So, I think it’s part of what I am, in a small way, thinking about in this book of poetry. That level of massive impact, little things like our desires, our needs. I love that video game, that product I buy, I love my iPhone, I’m talking to you on it right now. But what has the iPhone done? It’s product of the Anthropocene and it’s a cause of the Anthropocene. This object that’s so handy and convenient and hip and cool. So, I’m absolutely fascinated by that place we’re stuck in, and I really am trying to write about that.

Young Burnaby dancer raises money after hospital saved his grandpa
May 14, 2021 7:13 AM

Burnaby doctor honoured with college award for exceptional work
May 14, 2021 6:20 AM
Comments