15 beautiful libraries from around the world

Regardless of their age, the libraries all have the same goal in mind: The egalitarian sharing of information and ideas to people of all races, ages, and creeds.
Madison Troyer, Stacker.com Sep 19, 2022 7:00 AM
Listen to this article
00:07:55

Libraries are almost as ancient as the written word. The oldest-known library, the Library of Ashurbanipal, dates back to the 7th-century BCE. Belonging to an Assyrian king and housed in two buildings in his palace in Nineveh (located in present-day Iraq), the library contained some 30,000 cuniform tablets, as well as diptychs and parchments, on subjects ranging from administrative government topics to religion, medicine, history, and even several epics and myths.

Collections like this one and the Library of Alexandria were not meant to be places you could go to check out the latest bestseller, but rather they were intended to be repositories of information, places the world could send their hard-earned knowledge and stories, where they would be kept safe and secure lest we someday forget. Lending libraries, or circulating libraries, didn’t really take off until the 17th and 18th centuries when subscription libraries like Benjamin Franklin’s Library Company of Philadelphia were founded and mandates like the Museums Act were passed.

Today, we find ourselves almost spoiled for choice when it comes to libraries. There are 116,867 libraries in the United States alone as of 2019, and with the rise of e-readers and smartphones, we’re able to easily borrow materials from collections all over the world with just the press of a button. To celebrate the role of libraries (past and present) in our world, HeyTutor rounded up images of 15 beautiful libraries from around the world. Some of these institutions are thousands of years old, while others are have been disseminating materials for less than a decade.

Regardless of their age, the libraries all have the same goal in mind: The egalitarian sharing of information and ideas to people of all races, ages, and creeds. 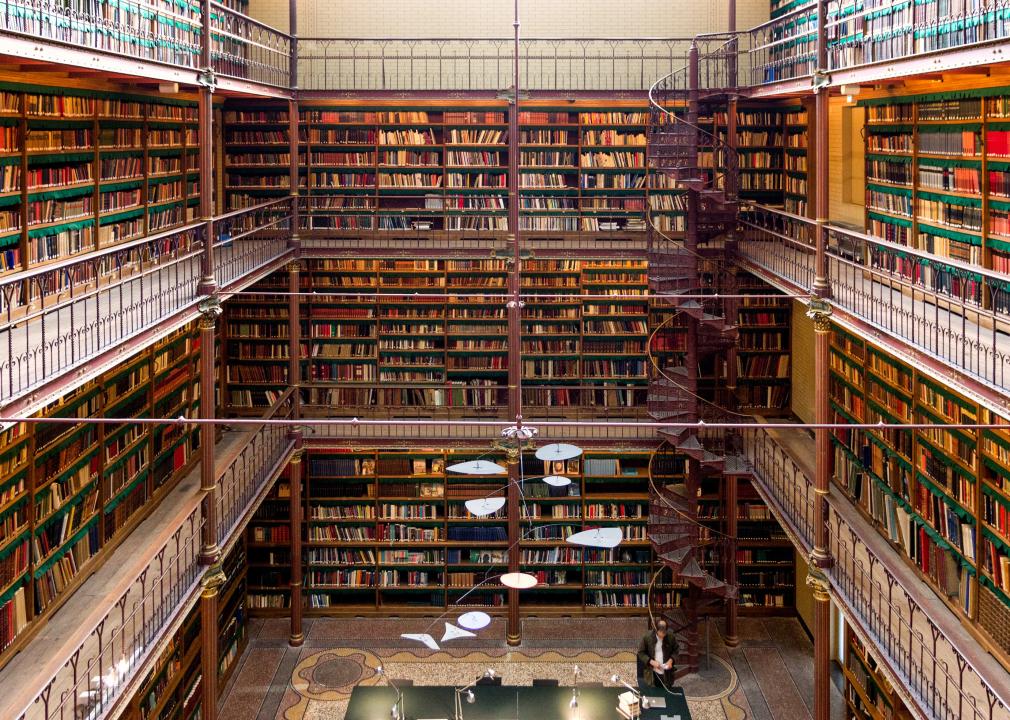 Founded in 1885, the Rijksmuseum Research Library is one of the largest art history research libraries in the world and is located in Amsterdam. There are currently an estimated 450,000 volumes in the library’s collection, which grows by around 10,000 items each year. 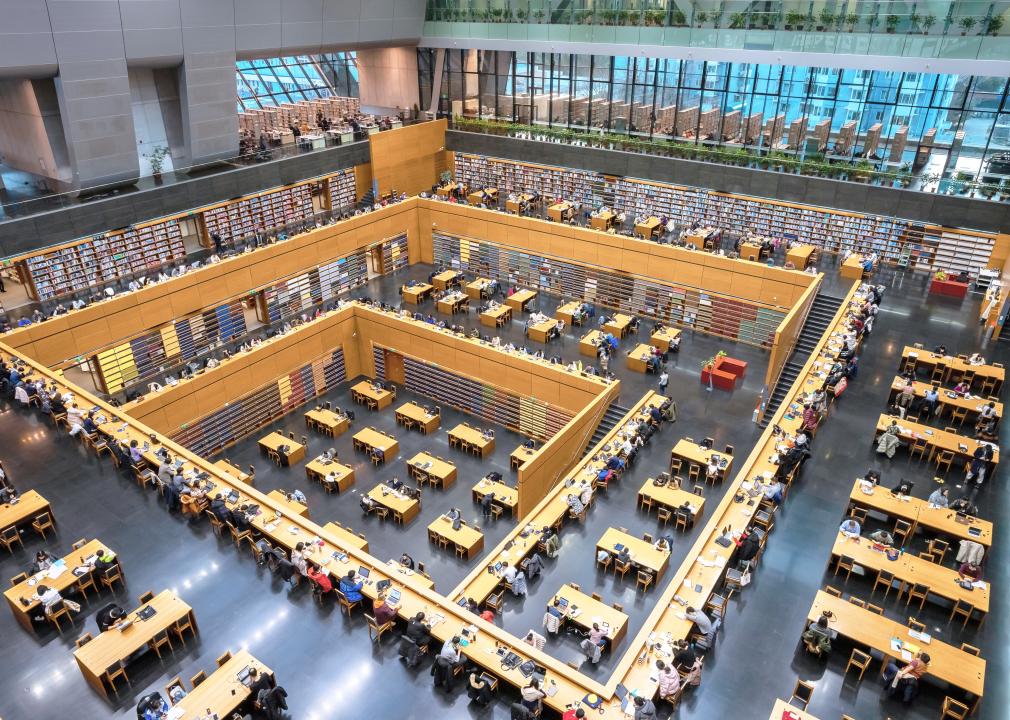 For more than 110 years, the National Library of China has been building its collection, which contains everything from inscribed tortoise shells and bones to ancient manuscripts and modern-day printed volumes. With over 33 million items—printed in 115 languages—this library in Beijing is one of the biggest in the world. 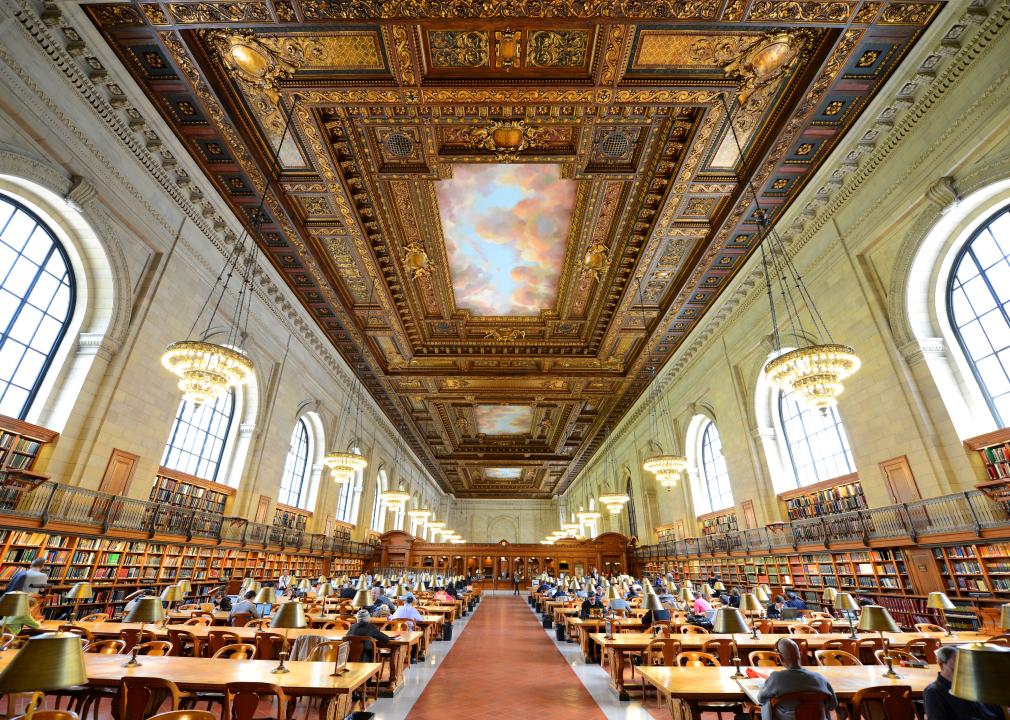 The flagship branch of the New York Public Library, the Stephen A. Schwarzman Building, a beautiful Beaux-Arts edifice, opened its doors in 1911. Nothing from this collection of 56 million items can be checked out, meaning researchers must utilize on-site reading rooms—like the one pictured above—if they wish to peruse the volumes. 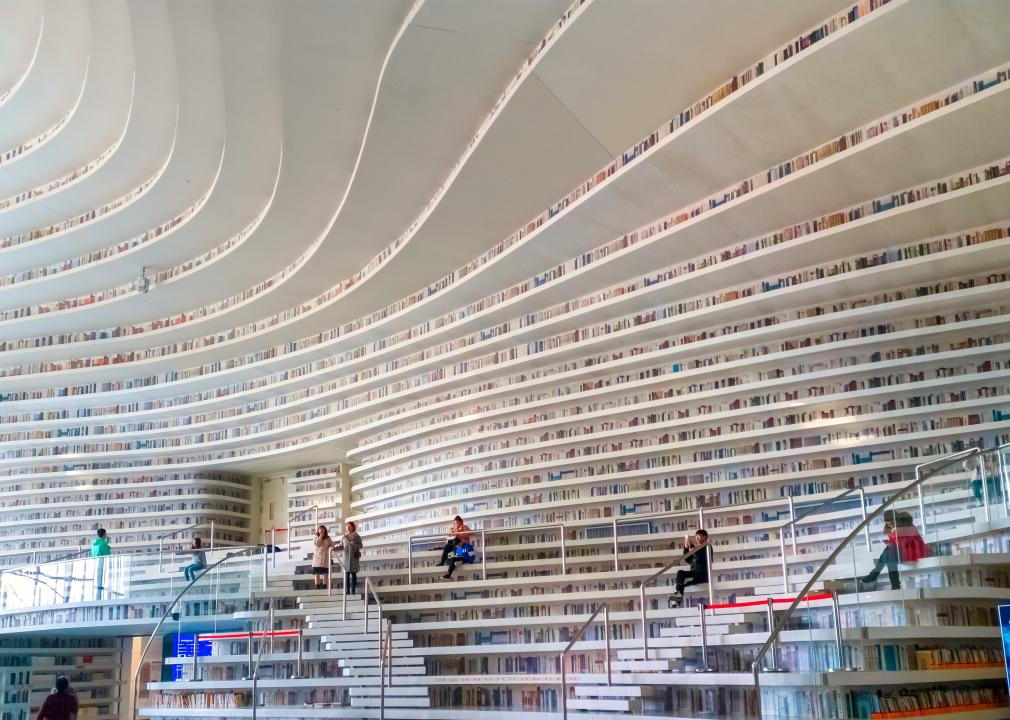 Designed by the Dutch architectural firm MVRDV, the Tianjin Binhai Library looks like it comes from the future and is located in Tianjin, China. Nicknamed “The Eye,” the building has the capacity to hold 1.35 million books and is just as much a community center as it is a public library, boasting dozens of meeting rooms and several rooftop patios, among other gathering spaces. 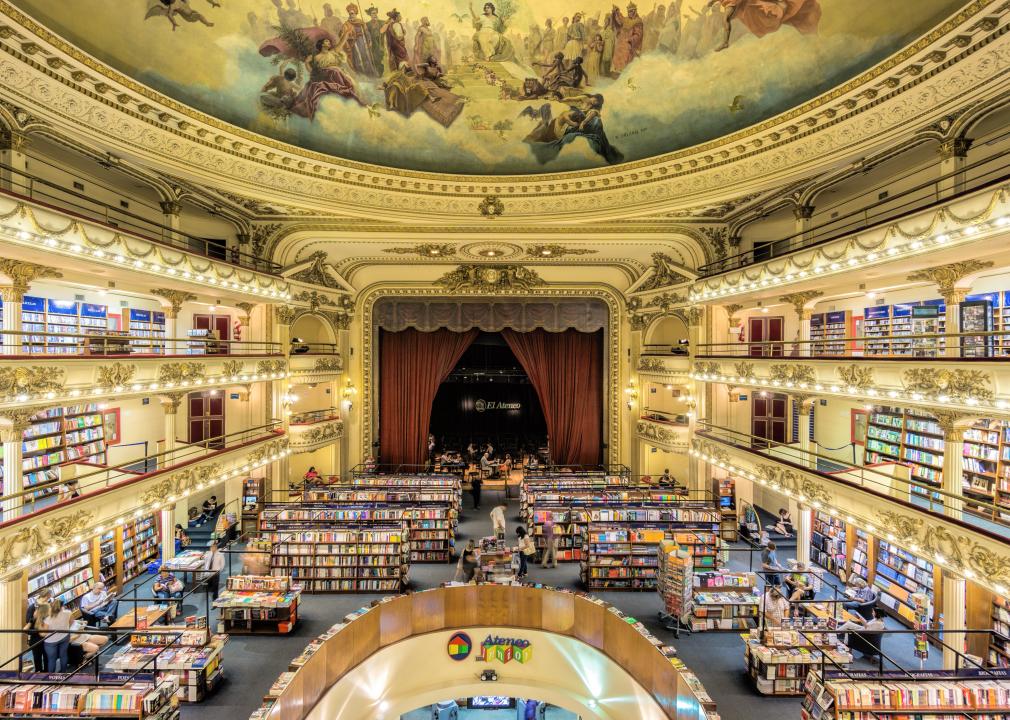 Located inside an old theater, El Ateneo Grand Splendid in Argentina was converted into its current bookish glory back in 2000. Many of the original features, which date back to the building’s opening in 1919, have been retained, including the old boxes which have been turned into visitor seating, and the stage which now houses a cafe. And sure, this is more of a bookstore than a library, but any peruser could easily lose themselves in the aisles of this biblio beauty. 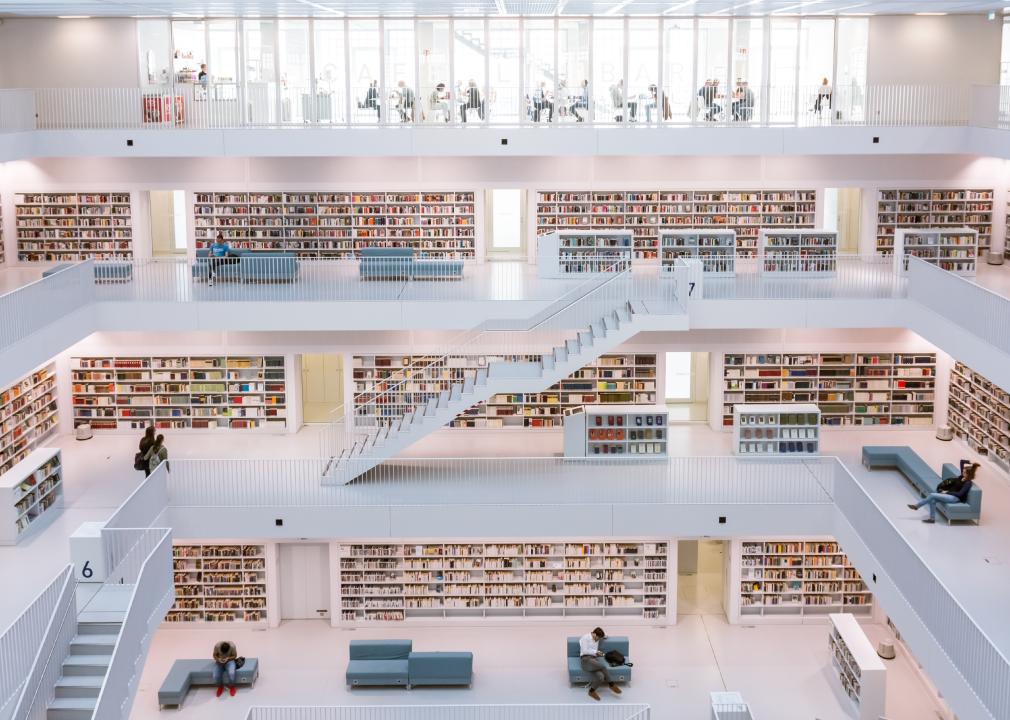 Modernist and minimalist, the Stuttgart City Library is one of the most photographed places in Stuttgart, Germany. Since it first opened in 2011, the inverted pyramid gallery has often been jokingly compared to a prison, thanks to its stark facade. 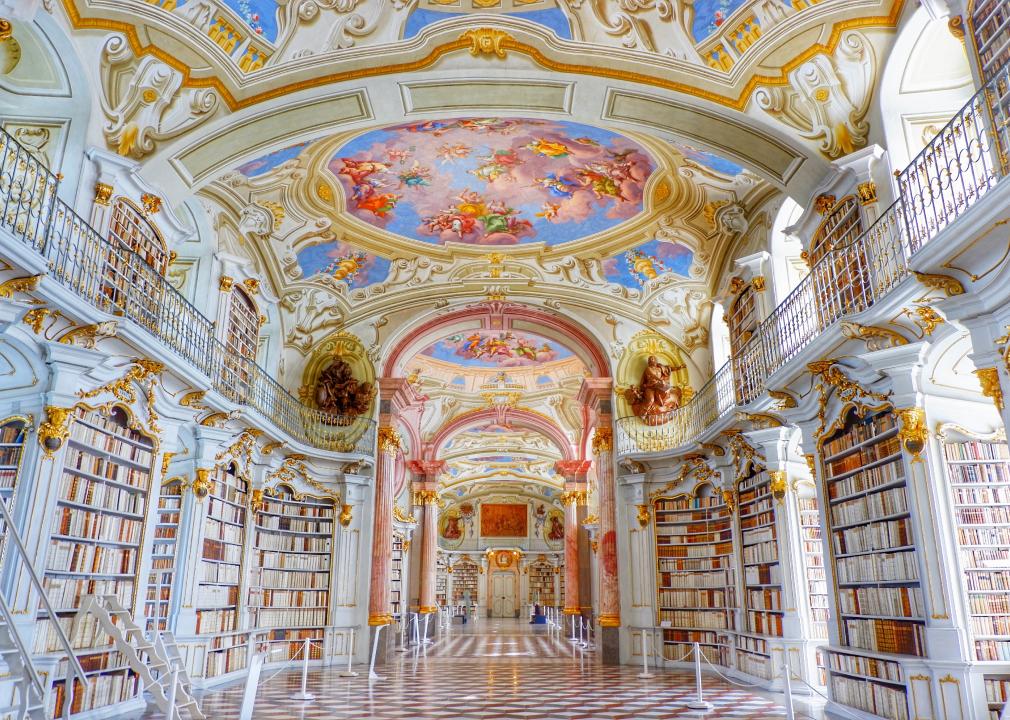 The largest monastery library in the world, the Admont Abbey Library was started in 1074 in Admont, Austria. The seven frescoes that cover the library’s ceiling depict the various stages of human understanding, and the Baroque-style shelves house 200,000 sacred texts as well as a host of secular volumes. 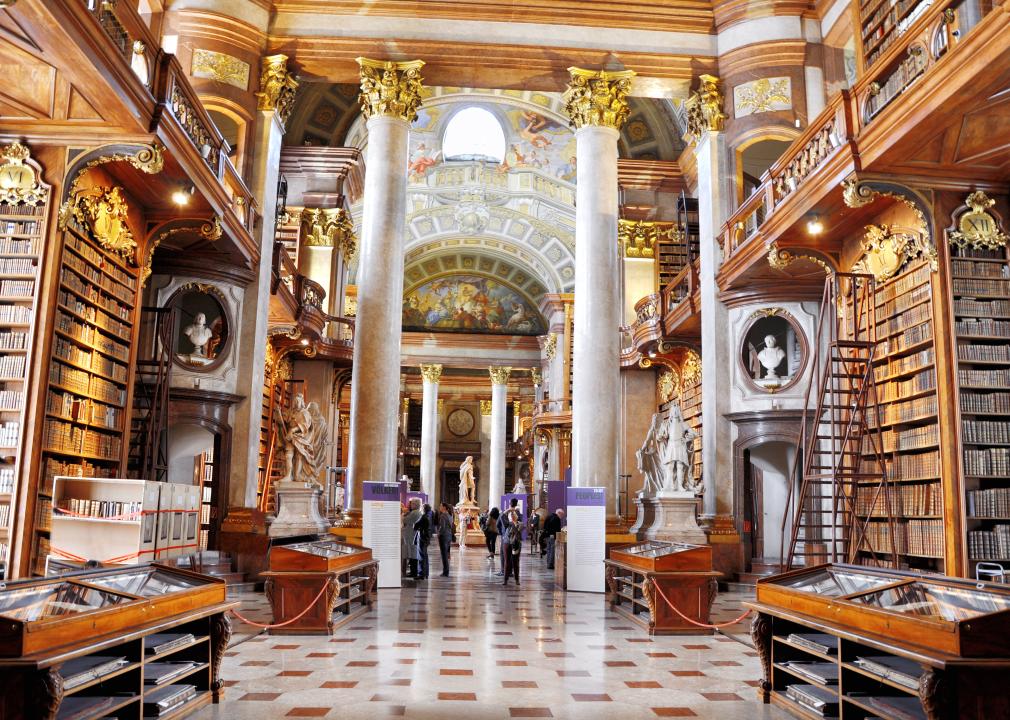 A part of Vienna’s Imperial Palace, the Austrian National Library was founded in 1723. Among its massive collection are 200,000 precious leather-bound books as well as a handwritten and illustrated medieval volume called “Evangeliar of Johannes of Troppau,” which dates back to 1368. 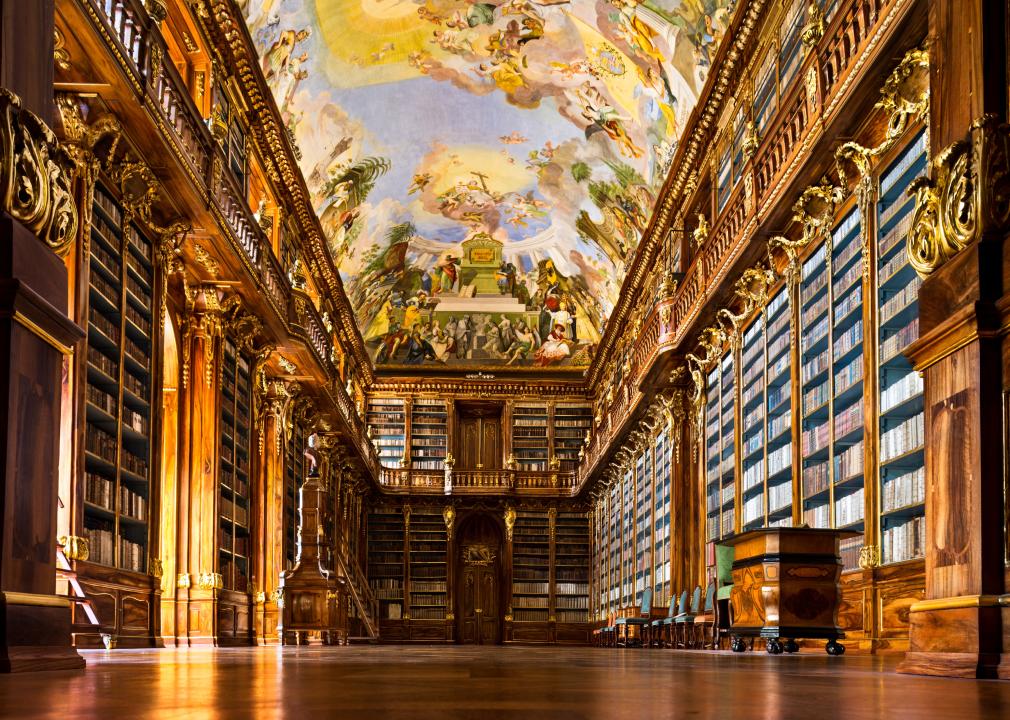 Though the collection in the Strahov Library dates back to the 12th century, the two halls in which the collection is currently housed weren’t built until the 17th and 18th centuries. Alongside the library’s 200,000 volumes is a “cabinet of curiosities,” an early precursor to museums that contains oddities of nature and unique collections of objects. The library is located in Strahov, Prague, Czech Republic. 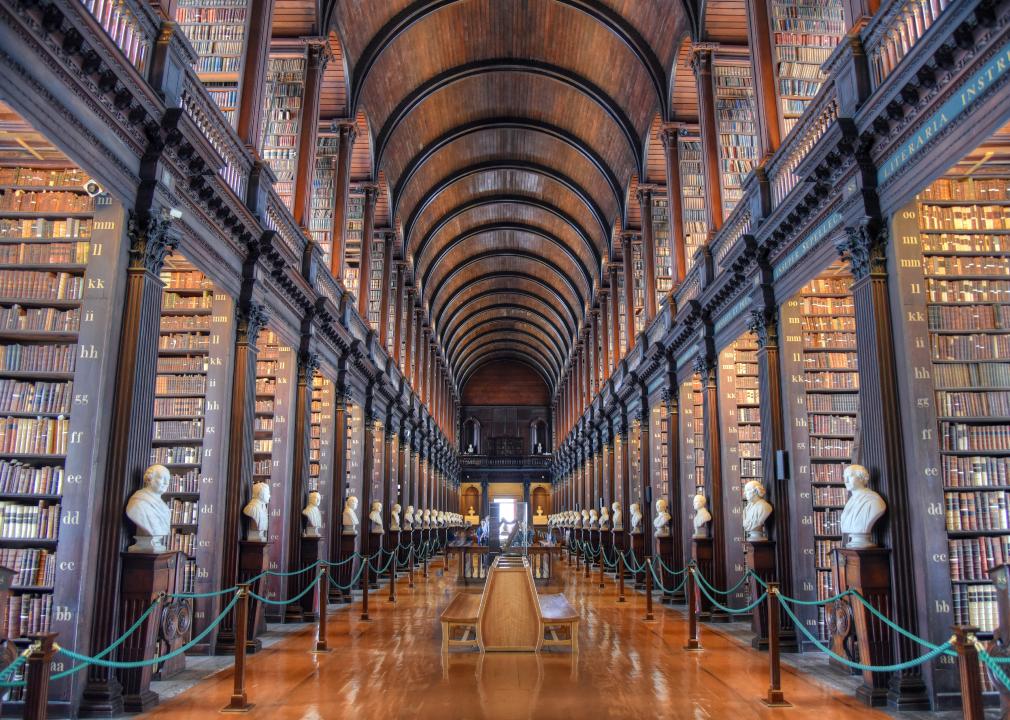 The largest library in Ireland, the Library of Trinity College Dublin opened in conjunction with the college itself back in 1592. Aside from its stunning architecture, the library is best known for being the home of the Book of Kells, an illuminated Latin manuscript of the four Biblical gospels, believed to have been created by monks in the area around 800 AD. 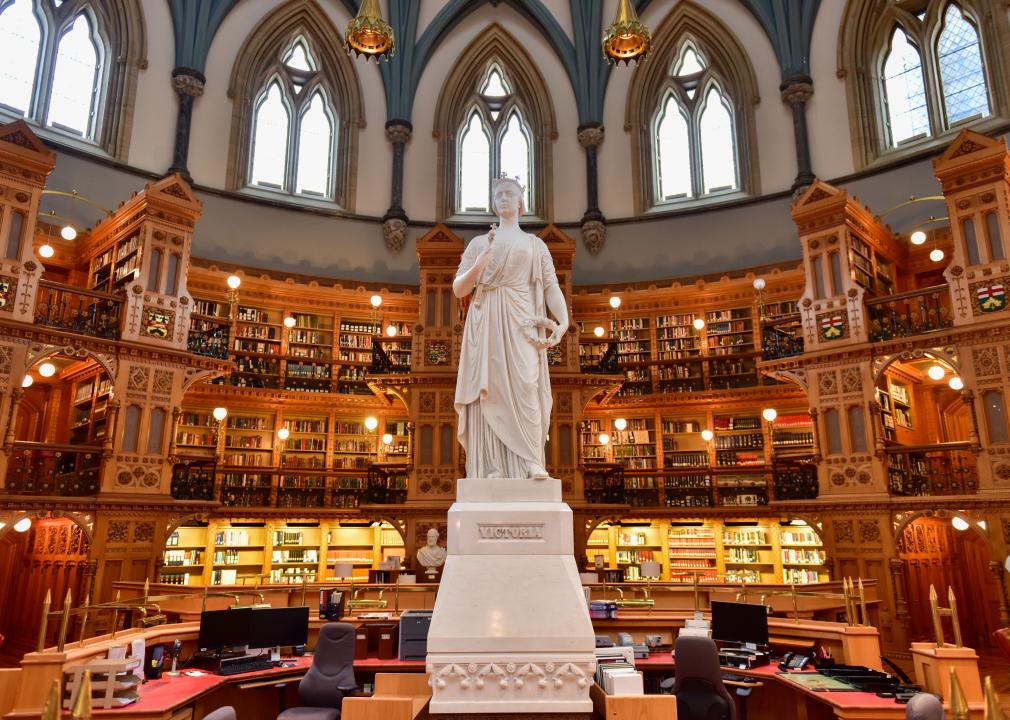 Described as “the most important example of Gothic Revival architecture in Canada,” Ontario’s Library of Parliament began construction in 1859 and was officially finished in 1876. Now home to 650,000 titles, the library appears on the backside of the country’s $10 bill. 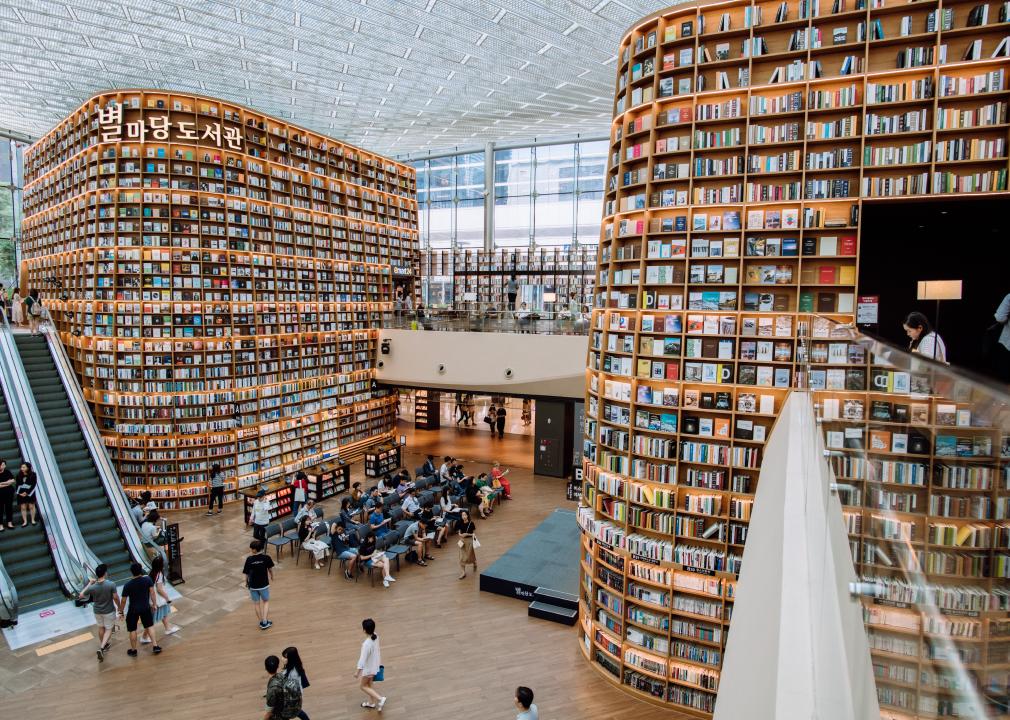 Located in the middle of a Seoul shopping mall, the Starfield Library has some 500,000 books and 600 magazines available for patrons. While materials cannot be checked out, an array of seating areas span the 28,000-meter space, making it easy to get some reading done on-site. 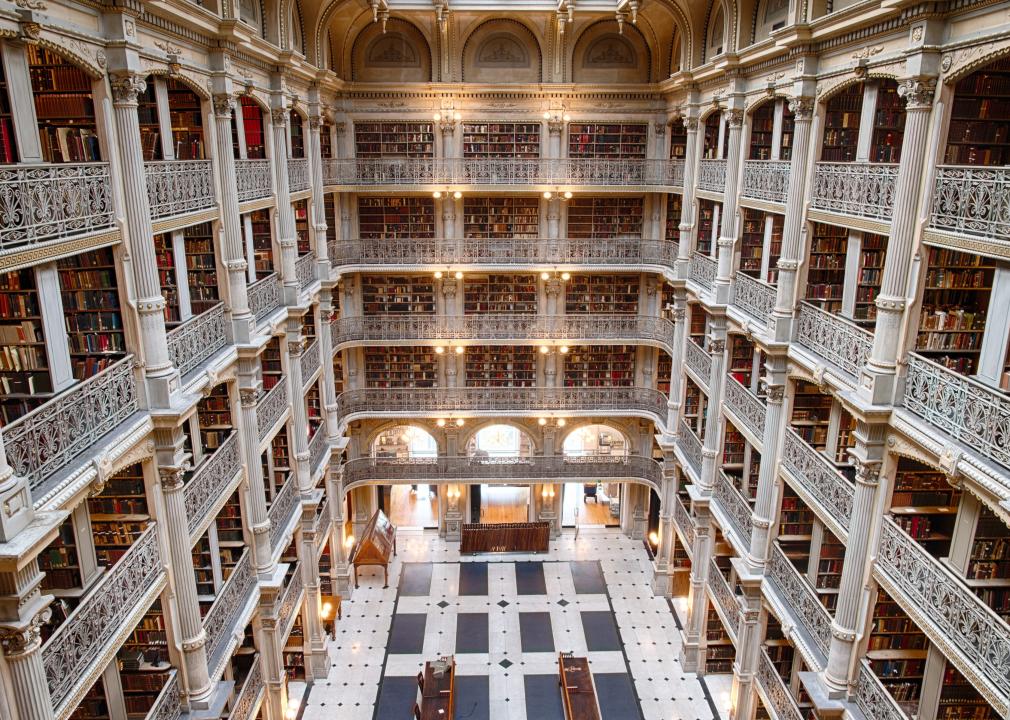 Founded by a Massachusetts-born philanthropist as a way to thank the people of Baltimore for their “kindness and hospitality,” the George Peabody Library opened its doors in 1878. The research library’s collection of 300,000 titles focuses on the 19th century, and while it is an official part of Johns Hopkins University, the library is also open to the general public. 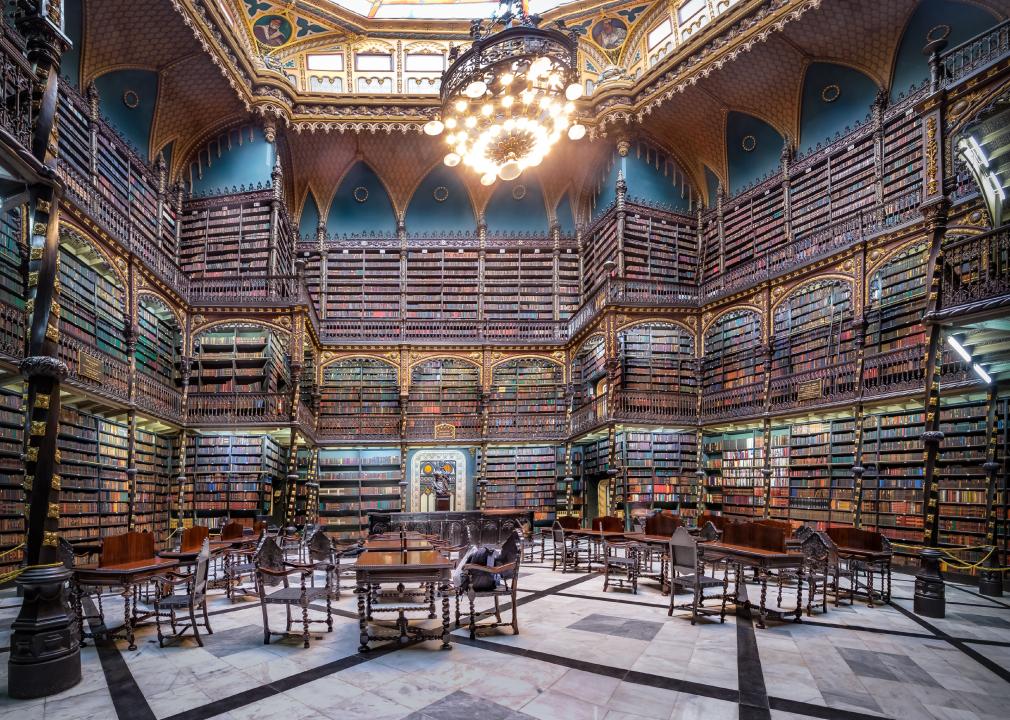 Three Portuguese immigrants began the Royal Portuguese Cabinet of Reading in Rio de Janeiro in 1822. The library now has one of the largest collections of Portuguese literature outside of Portugal, with almost 400,000 volumes lining the shelves. 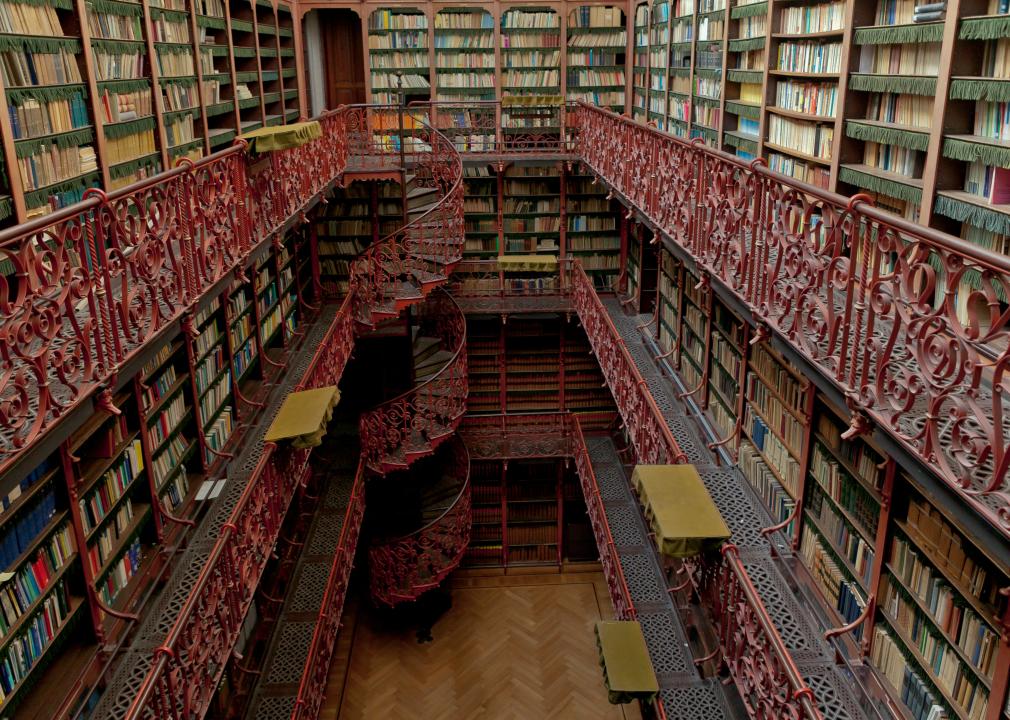 The architecture of the Handelingenkamer Library in the Netherlands may be stunning—the domed skylight and red cast iron staircases are especially a sight to behold—but the books housed inside are decidedly less exciting. Each of the volumes contains government reports, verbatim transcripts of parliamentary debates, and the results of government votes—not exactly the stuff of light reading.

This story originally appeared on HeyTutor and was produced and distributed in partnership with Stacker Studio.