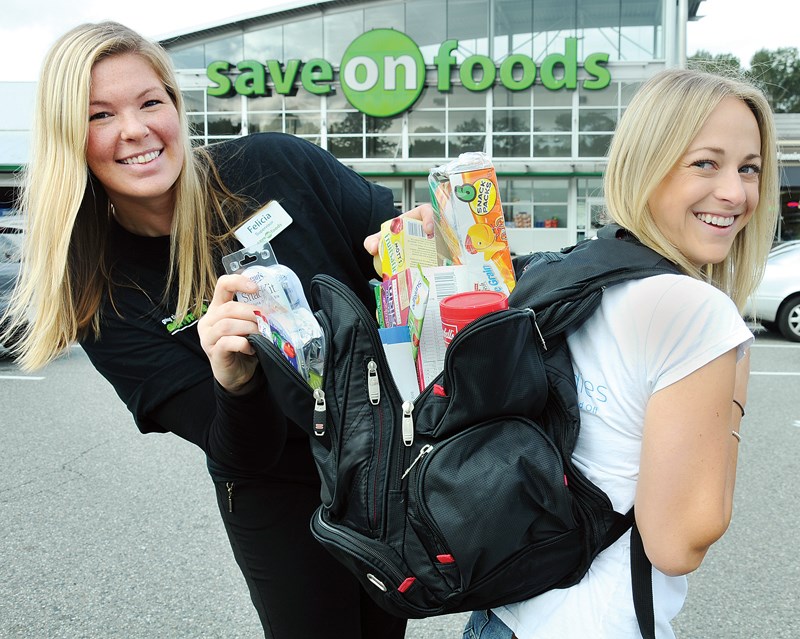 The North Shore is typically thought of as an affluent corner of the Lower Mainland, but child poverty exists in our community and there are kids who regularly go hungry.

“We know the issue is there, but we just don’t know quite how bad it is,” says Emily-anne King, co-founder and vice-president of Backpack Buddies, a charity that provides food to at-risk kids in Metro Vancouver. King says data has been collected on the prevalence of food insecurity in neighbourhoods such as the Downtown Eastside, where the issue is more obvious, but there’s a lack of hard statistics when it comes to childhood hunger on the North Shore.

“What we do know is what we hear when we’re on the ground,” she says, explaining that local teachers and outreach workers have approached Backpack Buddies and asked for help on behalf of their students. Currently, the charity already serves students at two schools on the North Shore, but it hopes to expand its reach by the end of this year. To do that, Backpack Buddies is running a month-long fundraising campaign in partnership with Save-On-Foods.

“With this event we have chosen to keep all of the foods and funds raised within North Vancouver,” she explains.

Throughout September, the four North Vancouver Save-On-Foods locations will be collecting funds for Backpack Buddies. One $10 donation provides one backpack of food, with six weekend meals plus snacks, for one child. This Saturday, Sept. 17, each store is hosting a special fundraising event that will include a barbecue lunch (by donation), spin-the-wheel game, raffle draws, product sampling, entertainment and prizes.

King hopes to raise $30,000 on Saturday in order to feed more kids in need. “The goal will be to serve four schools on the North Shore by Christmas.”

Born and raised in North Vancouver, King co-founded Backpack Buddies with her mother, Joanne Griffiths, in 2012. The charity strives to ensure food security for children in Metro Vancouver by providing a nutritious backpack of food at the end of each week to kids in need. It all started a few years back when Griffiths was attempting to bring a community garden to Queen Alexandra elementary in Vancouver. Her project was met with bureaucratic roadblocks though, so she sat down with school administrators to find out what was really needed at the inner-city school.

“The overwhelming answer to that was food for the weekends for kids,” King says.

As she and her mother learned, many students rely on free or reduced-price school meal programs during the week. But when Saturday and Sunday roll around, they might get only meagre meals – or nothing at all.

“No one really thinks about what happens to those children on the weekends,” King says.

Four years ago, Backpack Buddies ran its first campaign, partnering with a high school to collect 20 backpacks full of food for students at Queen Alexandra. Since then, donor or “buddy” schools have been the volunteers that support the organization. They have fundraisers, hold food drives and pack backpacks full of enough food to feed kids throughout the weekend. The charity also subsists through direct donations of food or funds, corporate sponsorships, various community fundraising events and grants.

According to a press release from Backpack Buddies, 20.2 per cent of Metro Vancouver children aged 17 and under live below the poverty line, one in five children in B.C. live in food insecure households, and B.C. has had the highest child poverty rate in the country for eight straight years – something King attributes to a lack of government policy.

“British Columbia is the only province in Canada without a poverty reduction strategy,” she says.

Since its inception, Backpack Buddies has broadened its reach and continues to grow. In past years, the charity has only been able to serve at-risk children twice a month, but, with more funding, its eventual goal is to be able to feed them every weekend.

“We now have 11 schools that donate into our program and we’re servicing nine schools around Metro Vancouver,” King says. “We’ve expanded a lot, but through that expansion we’ve realized just how much need there is.”

She spoke to one mother at end of the last school year who told her the impact Backpack Buddies has had on her family. “For her, what this program has done is just taken that little bit of stress off of her and it’s allowed her to feed herself rather than just feeding the kids,” King says. “These are the stories we hear all the time and this need is really shocking.”