What do you get when you take a half-pound of ground 100% beef and turn it into a thick patty, top it with cheese, bacon, and ketchup, and then sandwich it between two “buns” made out of deep fried macaroni and cheese, and then you top it with melted
Sep 16, 2019 11:13 AM By: Lindsay William-Ross 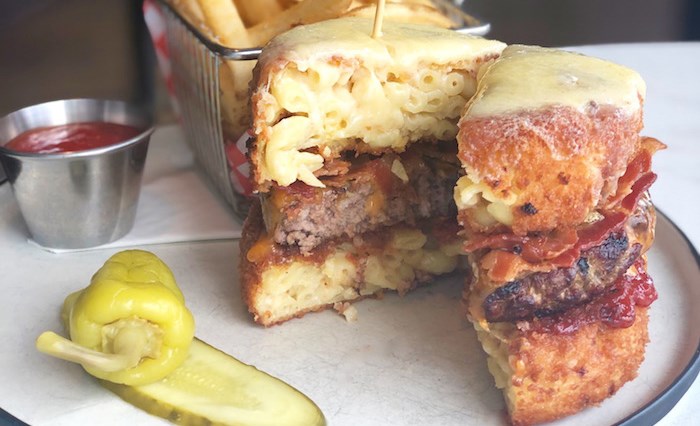 What do you get when you take a half-pound of ground 100% beef and turn it into a thick patty, top it with cheese, bacon, and ketchup, and then sandwich it between two “buns” made out of deep fried macaroni and cheese, and then you top it with melted Raclette cheese?

You get Le Big Mac N Cheese, the burger creation dreamed up by Executive Chef Alex Hancock at Richmond’s CAVU Kitchen Bar that just took first place among diners who voted for their favourite Metro Vancouver burgers served up during the eighth annual Le Burger Week.

I had the chance to go in and taste drive this beast (not to be confused with the Beast Master, the behemoth $32 burger with about a dozen toppings that’s also on CAVU’s extensive burger menu) ourselves, before it disappears from their menu at the end of September.

Le Big Mac N Cheese is definitely a knife and fork burger, so it’s literally the kind of dish you’ll want to divide to conquer. The mac and cheese is creamy and tender, and encased in a golden-fried coating that adds a nice crunch. It’s a hearty burger – and we did catch a patron at a nearby table making a crack about coronary health before placing his order for Le Big Mac N Cheese – but it doesn’t take it so far that you feel bad about your life choices.

I only made it through half the burger, and, as it turns out, I’m not alone. CAVU Sous Chef Ian Hutchins was on hand to talk a bit about their newly-crowned winning burger, and he says most people can’t finish it.

Burgers also happen to be a major focal point for CAVU, who have pretty much an entire page of their lunch and dinner menus devoted to the dish, including an extensive Build-Your-Own option, as well as plenty of special offerings.

Hutchins says he’s a classic simple burger kind of guy when he’s doing the ordering, though the CAVU Burger is also one of his top picks from the menu – that signature burger is made with port roasted onions, Tiroler bacon, applewood smoked cheddar, and dijoinaise.

From May through September, CAVU adds on a monthly special burger to their menu to celebrate warmer months, and with Le Burger Week falling annually from September 1-7, it was only fitting that Le Big Mac N Cheese wrapped up the 2019 season at CAVU with a bang – and a win.

So what’s the secret to a killer burger? Hutchins says it comes down the patty, “and the love and passion that goes into cooking it.”

You can find the burgers at CAVU at both lunch and dinner year-round, while Le Big Mac N Cheese will only be available through Sept. 30.

CAVU Kitchen Bar is located at 5911 Minoru Boulveard in Richmond at the Hilton Vancouver Airport Hotel, and the restaurant offers free parking.