They may be one of the new kids on the musical theatre block, but they’re continuing to prove they’re a force to be reckoned with. Align Entertainment is a dominant force in the 2019 OVATION! Awards nominations, announced today.
Jan 11, 2019 1:00 PM By: Julie Maclellan 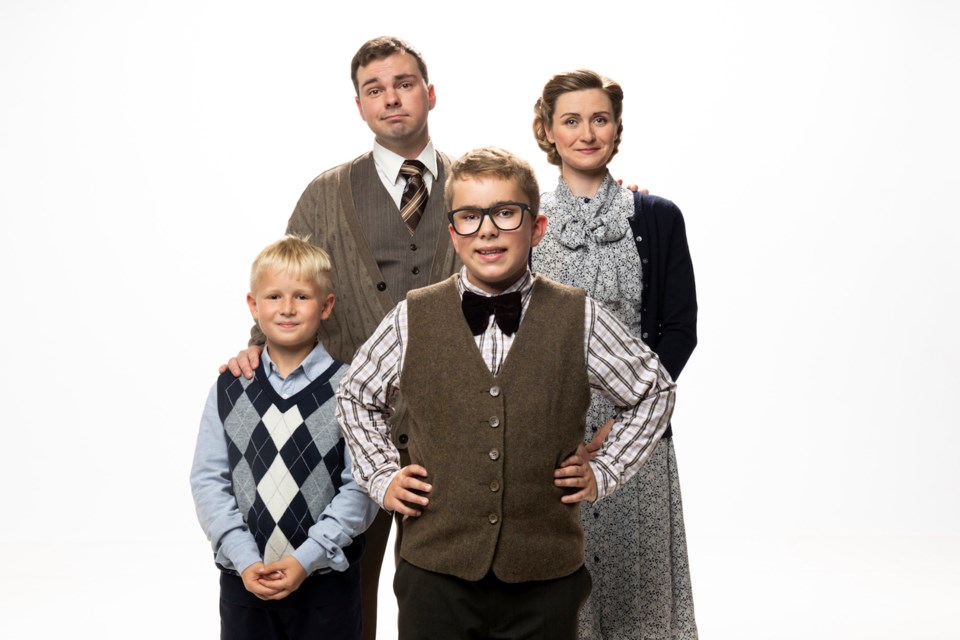 Brennan Cuff and Stefanie Stanley played the parents of Georgiy Rhatushnyak, left, as Randy, and Owen Scott, foreground, as Ralphie, in Align Entertainment's A Christmas Story: The Musical at Michael J. Fox Theatre in November. The musical is up for several OVATION! Award nominations.Emily Cooper, courtesy Align Entertainment/files

They may be one of the new kids on the musical theatre block, but they’re continuing to prove they’re a force to be reckoned with.

Align Entertainment is a dominant force in the 2019 OVATION! Awards nominations, announced today. The awards, which recognize the best musical theatre in the region, will be presented at the 15th annual awards ceremony on Sunday, Jan. 27 at the Vancouver Academy of Music.

The company earned a host of nominations for the two productions it staged at Burnaby’s Michael J. Fox Theatre in 2018: Legally Blonde, which ran in February, and A Christmas Story, which ran in November.

Legally Blonde is up for Outstanding Community Production of a Musical, while its star, Julia Ullrich, earned a nomination for the Amy Wallis Outstanding Lead Performance in a Musical – Female award. In that category, Ullrich is up against Burnaby performer Stefanie Stanley, who earned her nomination for her performance as Mother in A Christmas Story.

Amanda Russell is up for Outstanding Supporting Performance – Female for her appearance as Miss Shields in A Christmas Story. Three Legally Blonde performers are up in the Outstanding Ensemble Member – Female category:  Vanessa Merenda, Tiana Swan and Ali Watson, and Jessie Chan from A Christmas Story is nominated in the same category.

Colton Fyfe, a Burnaby performer, is up for Outstanding Ensemble Member – Male, in part for his work in Legally Blonde (he was also in Fighting Chance Productions’ Guys & Dolls, Renegade Productions’ Rent and Rushed Productions’ Albireo).

Georgiy Rhatushnyak is up for Outstanding Newcomer in a Musical – Male for his work as Randy in A Christmas Story – against his own co-star, Owen Scott, who starred as Ralphie. The show’s children’s ensemble is also up for a Special OVATION! Award (which covers work that doesn’t fit into a particular category).

Conor Moore is nominated in Outstanding Set Design for A Christmas Story.

Other Burnaby performers are also recognized in the nominations. Laura Cowan earned an Outstanding Supporting Performance – Female nomination for her work as Marie/Fairy Godmother in Theatre Under the Stars’ Cinderella. Allegra Wright, a Burnaby Mountain Secondary Grad, is up for Outstanding Newcomer in a Musical – Female for her work in Kate Maccoll’s This is Now.

Did we miss anybody? If you know of any Burnaby connections not listed here, email Julie, jmaclellan@burnabynow.com.