Burnaby teacher stars in A Christmas Story: The Musical

It was a small moment for Stefanie Stanley that reminded her just how much it means to be standing where she is right now.
Oct 29, 2018 2:06 PM By: Julie Maclellan 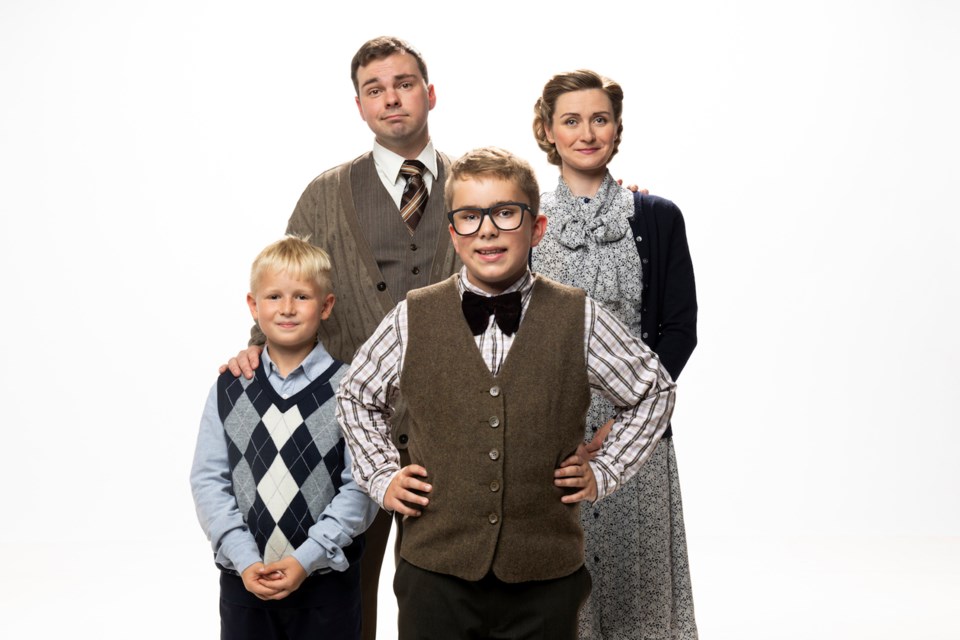 Brennan Cuff and Stefanie Stanley play the parents of Georgiy Rhatushnyak, left, as Randy, and Owen Scott, foreground, as Ralphie, in A Christmas Story: The Musical. The Align Entertainment production is onstage at Michael J. Fox Theatre in Burnaby Nov. 2 through 17.Emily Cooper, courtesy Align Entertainment

It was a small moment for Stefanie Stanley that reminded her just how much it means to be standing where she is right now.

She was in costume fittings for dresses for her role as Mother in Align Entertainment’s production of A Christmas Story: The Musical, onstage Nov. 2 to 17 at the Michael J. Fox Theatre.

One of the fittings happened to be for her character’s Christmas dress, and Stanley was going through the motions to make sure everything fit, not thinking too much about what she was wearing.

“One of the girls in the cast just looked up at me with these huge eyes and said, ‘That’s beautiful,’” Stanley recalls. “It struck me, and I suddenly remembered being her age in shows, and looking up at those ladies who were the leading parts in the show and thinking, ‘I want to be like that some day.’

“I know it sounds sappy, but it really is a part of it.”

“Sappy” it might be, just a little, but it’s a genuine expression of how Stanley feels about being in the musical.

The story will be familiar to many viewers from the 1983 film A Christmas Story (which itself was inspired by the semi-fictional tales in Jean Shepherd’s 1966 book In God We Trust: All Others Pay Cash). As with the film, the musical adaptation enters the world of Ralphie, a young dreamer in 1940s America who wants nothing more for Christmas than the ultimate gift: the official BB gun of the heroic cowboy Red Ryder.

“A Christmas Story is so different, I think, than the other shows we’ve done,” says Stanley, who was last seen as Elle Woods’ mother in the company’s production of Legally Blonde back in February.  “The reason it’s different is it’s got a different mood.”

She contrasts the story, and the movie it’s based on, with other popular Christmas movies like 1990’s Home Alone, which she watched voraciously in her childhood and which she characterizes as being filled with “frantic energy.”

A Christmas Story, she says, has a different feel altogether.

“The whole movie has such a soft, nostalgic mood to it,” she says. “It’s slower, the pace of the movie is slower, and the most pressing thing happening is all in the little boy, Ralphie; it’s all in his mind. It’s all in his fantasy for this coveted toy. It’s just got this really lovely Christmas feeling to it.”

Stanley, who used to teach in the French immersion stream at École Inman Elementary School, has stepped back from full-time teaching this year to work as a teacher-on-call instead.

As the mother of two children, she says the change has given her a little more space to pursue her work as a parent and a performer. And she’s appreciating having that space to work on the role of Mother – which, she notes, is a central one to the show.

The musical, which was written by Benj Pasek and Justin Paul (creators of La La Land and The Greatest Showman), features a lot of “underscoring,” in which the orchestra plays underneath many of the spoken scenes.

“We have to marry what we’re saying to a music bit or cue,” Stanley says. “There’s a really big, important connection happening. … When it works, it’s going to be so, so beautiful. It’s like watching the film. It’ll just give you that feeling and that mood. It’s so subtle.”

As Mother, Stanley starts almost all of the scenes in the show – since it’s the mom who’s the centre of everyone’s universe and who gets everyone moving into their day-to-day routine. Which means it’s on Stanley to ensure she has each of her entrances exactly right, so the orchestra conductor and the stage manager know exactly where they’re at in the performance.

“I have to be really precise,” Stanley says. “It’s a big challenge for me, but it’s so lovely. I’m really glad to be sort of available to do it, in my life this year.”

In previous Align Entertainment appearances in ensemble roles, Stanley says she had different worries – mostly about keeping up with the younger performers in the dance numbers. For this production, she’s spent a lot more time in solitary work, working on her lines, to be ready for the demands of multiple rehearsals a week.

What’s really blown Stanley away about the process this year is watching the young performers who are part of the Christmas Story cast.

“It’s so impressive. They do a huge tap number that will just blow the roof off the house,” she says.

“Community theatre, we rehearse at night and all day Sunday,” she says. “These guys are super-dedicated. They’re giving up Halloween with their friends. They don’t get to trick-or-treat.”

With evening rehearsals, even the youngest performers have to push through from 7 p.m. until 10 – and Stanley notes that, even as an adult, she notices her own energy and focus waning by 9:30.

“It takes a lot of effort, a lot of energy. They rally and they get it done,” she says. “These kids are really driven. They want to do it. There’s no extrinsic motivation. They don’t get paid, so what is it that it gives them back? It’s just gotta be a love for it.”

Mind you, she notes, that’s true for the adult performers too.

“We’re all doing it for love, not money,” she says. “And there’s just so much love in theatre; we’d do it anyway.”

What: A Christmas Story: The Musical, presented by Align Entertainment