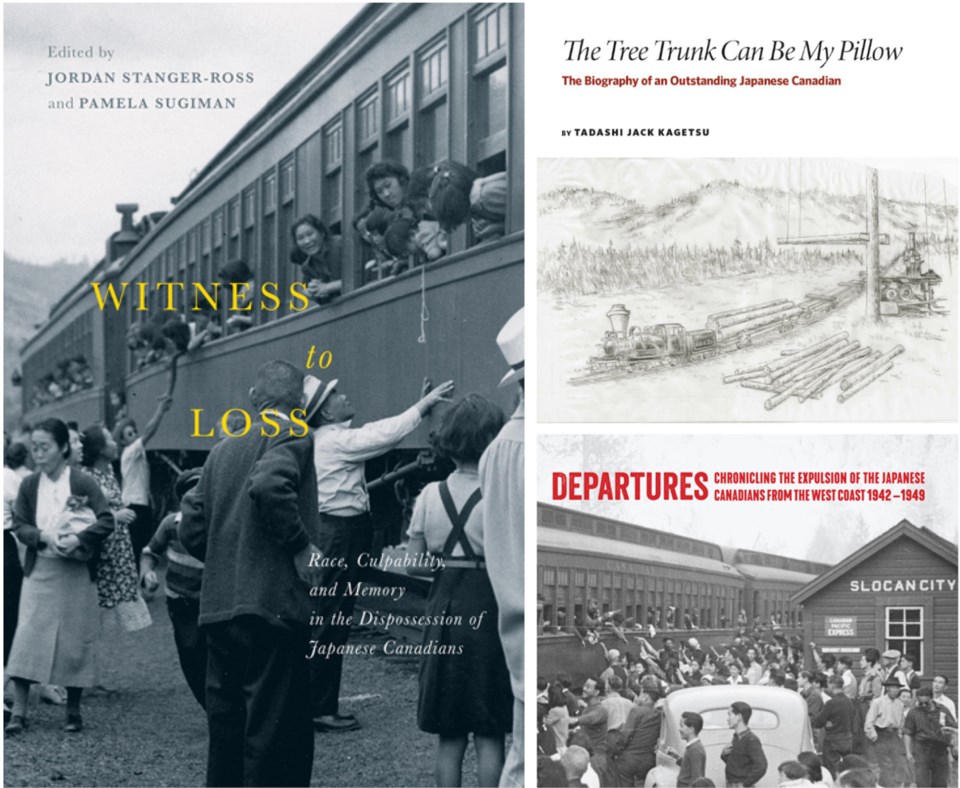 Three books tracing the Japanese-Canadian internment experience are being launched in a special 75th anniversary event at the Nikkei National Museum and Cultural Centre Nov. 25.contributed

Seventy-five years ago, Japanese-Canadians were labelled as enemy aliens and rounded up for shipping to internment camps.

This month, the Nikkei National Museum and Cultural Centre is honouring that past with a book launch event that celebrates three works about Japanese-Canadian history.

Guest speakers Jordan Stanger-Ross, John Endo Greenaway, Linda Kawamoto Reid and Sherri Kajiwara, the Nikkei National Museum’s director-curator, will be on hand to introduce the books, and the presentations will be followed by book signings and refreshments.

Greenaway and Reid are the co-authors, with Fumiko Greenaway, of Departures: Chronicling the Expulsion of the Japanese Canadians from the West Coast, 1942-1949. Using archival photos, the memories of survivors, recipes and artefacts from the camps, and poetry – both tanka and haiku – the book presents a portrait of the people who were forced from their homes. Woven throughout are the voices of the third and fourth generations, “offering echoes of those years that continue to resonate long after the last camp was closed down.”

Stanger-Ross is the co-editor, with Pamela Sugiman, of Witness to Loss: Race, Culpability and Memory in the Dispossession of Japanese Canadians. It’s the previously unknown memoir of Kishizo Kimura, an interned Japanese Canadian who also served as a member of two controversial committees that oversaw the forced sale of the property of Japanese Canadians in Vancouver during the Second World War – meaning that, as a press release notes, “Kimura participated in the dispossession of his own community.”

“This remarkable document chronicles a history of racism in British Columbia, describes the activities of the committees on which Kimura served, and seeks to defend his actions,” the release notes. “More complex than just hero or villain, oppressor or victim, Kimura raises important questions about the meaning of resistance and collaboration and the constraints faced by an entire generation.”

The third book that will be presented is The Tree Trunk Can Be My Pillow: The Biography of an Outstanding Japanese Canadian. It was written by Tadahi Jack Kagetsu about his father, Eikichi Kagetsu.

“It is a very personal history. The book also has communal resonance for Japanese Canadians,” the release says. “It reflects reverence for elders and speaks to the accomplishments and losses of a generation of immigrant founders.”

The Nikkei National Museum and Cultural Centre is at 6688 Southoaks Cres. See www.nikkeiplace.org for more details.