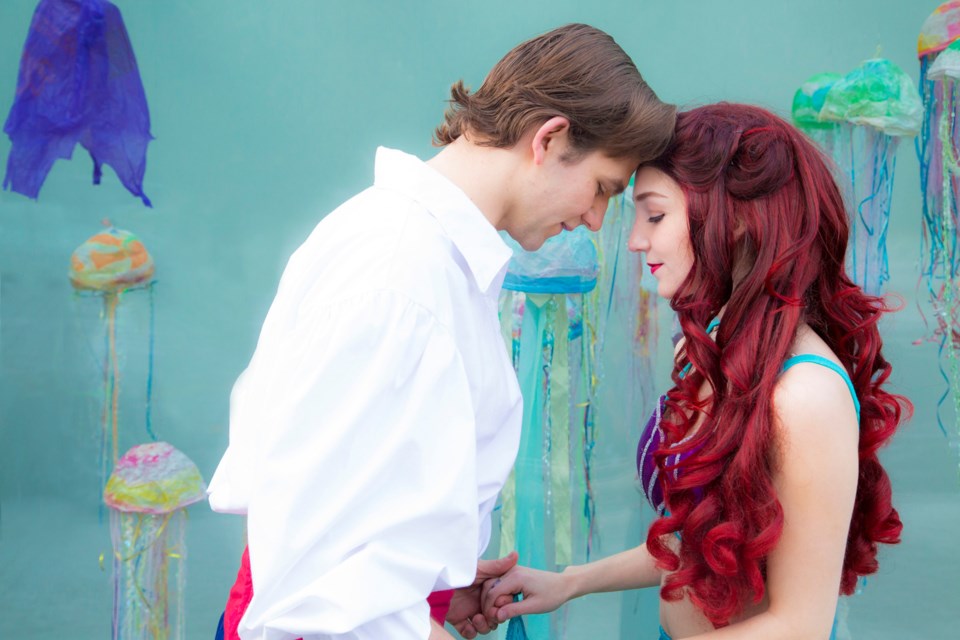 As a performer, Colton Fyfe has always liked the character of Prince Eric in The Little Mermaid.

He’s an adventurer, a seafarer, a young man interested in exploring the world and not being confined to one place – qualities that Fyfe can relate to.

Now, the 22-year-old actor gets to bring the prince to life in the Align Entertainment production that opens Feb. 3 at the Michael J. Fox Theatre.

“It is so much fun. It’s a dream role of mine,” Fyfe says with evident enthusiasm.

It’s the Burnaby resident’s second time onstage with Align Entertainment, following on the heels of Joseph and the Amazing Technicolor Dreamcoat in the fall. Align is the first company Fyfe has worked with outside of school – he just graduated from Capilano University’s performing arts program – and he says he couldn’t have lucked into a better company.

“Align tries its best, and succeeds, at making the rehearsal process and the show process feel like you’re part of a family,” he says. “You feel safe. It makes you feel safe to be vulnerable, to do your best work.”

He says every person in the cast is hard-working and putting their best foot forward every rehearsal.

“This group, it has been an extraordinary experience,” he says. “It’s been like getting to know another family.”

Fyfe, a native of Yellowknife, N.W.T., was first drawn to the stage in high school – his high school was known for having a high-quality drama department and staged musicals each year. It was his high school director, an actor who had trained at the American Academy of Dramatic Arts, who warned Fyfe that pursuing a professional career as an actor wasn’t an easy path, but who encouraged him to go for it if it was his true passion.

It was, and Fyfe followed his dream to Capilano and the Lower Mainland, where he’s now doing his best to carve out a path as a professional performer.

“I don’t regret that decision at all,” he says.

He admits it’s hard to find professional work in Vancouver, so he’s still keeping other work to cover the bills. Ultimately, he says, if he could get a job with a touring company – like Broadway Across Canada – that would be his dream job.

As far as roles go, he has a couple other favourites he’d love to play some day: Frankie Valli in Jersey Boys, and Phantom in Phantom of the Opera.

At the moment, he’s thrilled to be exploring the character of Prince Eric.

“It’s a lot more challenging than I anticipated, to be honest,” he admits with a laugh.

He says the challenge for him comes with balancing the two aspects of the prince’s personality – the adventurer who wants to be out in the world, and his regal, princely self.

And, of course, Fyfe knows he’ll never be the true star attraction in a musical that involves Ariel – a mermaid and a princess, after all, is an unstoppable combination.

But he says he’s having fun bringing one of Disney’s best-known princes to life. And he likes the fact that the stage musical expands somewhat on the movie, adding more relationship development between Ariel and Eric and providing further insight into some of the characters.

Plus, it’s added songs – although the classics will be there for anyone who loves the movie. (Yes, Part of Your World, Under the Sea and Kiss the Girl will all be present.)

“It’s fun for the whole family,” Fyfe promises. “There’s lots of good moments for the kids, and a good plot for the adults. It’s just a super-fun, energy-packed show.”

It’s directed by Chad Matchette, with musical direction by Brent Hughes and choreography by Melissa Turpin.

See www.alignentertainment.ca for all the details.

WHAT: The Little Mermaid, presented by Align Entertainment

WHEN: Feb. 3 to 18, Thursdays through Saturdays at 8 p.m., with matinees on Saturdays and Sundays at 2 p.m.