Five young musicians from Burnaby are following in some very big footsteps in the world of classical music. The five Burnaby performers are among 22 from B.C.
Jun 12, 2014 10:14 AM By: Burnaby Now 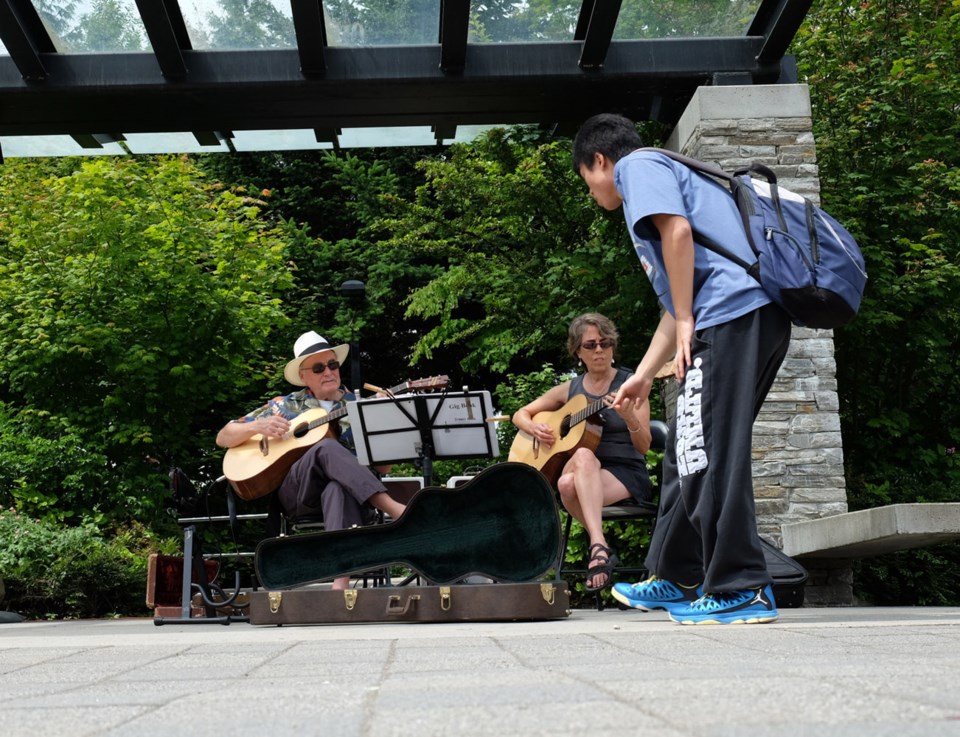 Stringz Aloud performs at UniverCity town square on Wednesday, June 11 as part of the summer busking series. Buskers will be out in the square every Wednesday from 11:30 a.m. to 2:30 p.m. through the summer.Larry Wright

Five young musicians from Burnaby are following in some very big footsteps in the world of classical music.

The five Burnaby performers are among 22 from B.C. chosen to advance to the national finals of the Canadian Music Competition - the country's top classical music competition for youth aged seven to 30.

Almost 500 musicians started their journey in the competition at various regional competitions, and top scores advanced through regional and provincial rounds before being chosen for the national final.

The final will be held June 21 to July 3 in Quebec City, and the top performers will share more than $100,000 in scholarship money.

The prestigious competition gives a glimpse into the future of Canadian classical music - past winners include such names as Marc-André Hamelin, Angela Hewitt, Louis Lortie, Liona Boyd and Isabel Bayrakdarian.

Check out www.cmcnational.com/en/ for more details.

It's World Knit in Public Day this Saturday - and you're invited to join in.

The Tommy Douglas Library is hosting a Knit2gether gathering on Saturday, June 14 from 11 a.m. to 2 p.m.

Everyone is invited to join in for knitting, crocheting, stitching and chatting with other likeminded folks. It's open to all skill levels and all ages - just bring your yarn and needles, scissors and supplies. (A limited number of needles and some yarn will be available for those who want to give it a try.)

Tea is provided, and you can feel free to bring treats to share.

Knit2gether is free, and no registration is needed - just drop in to take part.

The monthly gatherings  also continue through the summer, with upcoming sessions on July 12 and Aug. 16. Check out www.bpl.bc.ca/events for all the details.

The winner of CBC's Canada Reads 2012 will be reading at the Metrotown library branch on Monday.

Carmen Aguirre is on hand at the Burnaby Public Library's Bob Prittie branch on Monday, June 16 from 7:30 to 8:30 p.m.

Aguirre's first book, Something Fierce: Memoirs of a Revolutionary Daughter, won Canada Reads in 2012 and has become a Canadian bestseller.

She's also well-known as a theatre artist, with more than 60 film, television and stage acting credits, and she has written and co-written 20 plays - among them Chile con Carne, The Trigger, The Refugee Hotel and Blue Box.

She'll be reading from Something Fierce.

The event is free, and registration isn't needed - just drop in to the library at 6100 Willingdon Ave. For information, call the library reference desk at 604-436-5400.

If you happen to be up UniverCity way this summer, then don't forget to pop by SFU Town Square on Wednesday afternoons to check out the summer busker series.

Performances run from 11:30 a.m. to 2:30 p.m. in the square (on University High Street beside Renaissance Coffee and the second transit loop).

Next week - Wednesday, June 18 - features Clara Shandler, known as the "Sidewalk Cellist." Shandler takes her carbon-fibre cello out to the streets and provides a musical mix of "everything from Bach to Nirvana, jazz to heavy metal," a press release promises. (See more about her at www.sidewalkcellist.com.)

On June 25, you can hear from Kaya Kurz, a 16-year-old singer-songwriter from Alpha Secondary School who's into music, writing poetry, Doctor Who, zombies and "nerd culture in general," the release says.

On July 2, the performance features singer-songwriter The Land of Deborah.

Other performers through the summer include singer-songwriter Matt McAllister, the string duo Stringz Aloud, violinist Zelko Krakan, and the fiddle-guitar duo Cosmic Wink.

The busking series runs Wednesdays until Oct. 1. Check out www.univercity.ca/events for more details about the event and the performers.

Do you have an item for Lively City? Do you know an interesting artist, performer or arts group who deserves coverage? Send all your arts and entertainment ideas to Julie, jmaclellan@burnabynow.com, or find her on Twitter, @juliemaclellan.