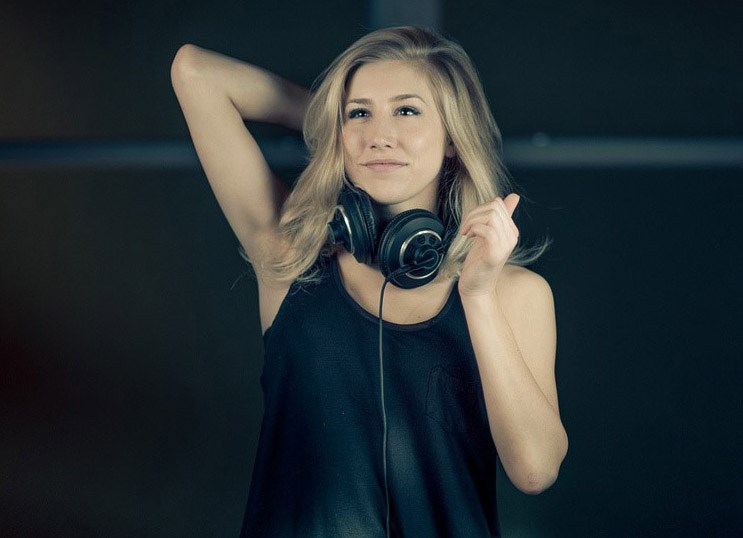 Stephanie Standerwick is building an international following in the world of Christian music.Dave Bryson Photography, contributed

Sit down with Stephanie Standerwick, and you wouldn’t know she’s ever faced doubt or darkness.

There’s nothing forced about the effusive greeting, the cheerful smile and the sunny self-confidence she brings with her into the coffee shop. And why shouldn’t she be brimming with optimism? The 31-year-old Burnaby singer recently returned from Atlanta, Georgia, where she was honoured with an International Artist of the Year award at the International Gospel Music Awards.

Throw in a resumé that includes performances at some of the Lower Mainland’s biggest venues and a Youtube channel that’s earned her some 800,000 views, and you’ve got all the makings of a success story.

What you might not see, though, is that for Standerwick, her story is less about success and more about faith. And healing. And love.

Standerwick was raised in a Christian household, in a family that regularly attended Willingdon Church.

“I grew up hating Christians, thinking they were judgmental,” she admits, “even though I considered myself one in the shadows.”

Even as she continued her own churchgoing journey, she often felt herself on the outs with the community that surrounded her. She found herself pulled towards a more secular life; she loved rock music, and she admits to getting herself kicked out of church choirs for singing in rock bands at casinos.

She always believed in God, and in her own relationship with Him, but it wasn’t up close and personal.

“You could pray, but it was like He was on the other side of the wall,” she says.

Standerwick spent her younger years going full-tilt after her music career, singing in a variety of corporate and party cover bands. She also set her sights on science, studying molecular biology at Simon Fraser University.

Along the road, she says, she grew selfish. She alienated herself from her family. She got herself entangled in a relationship that wasn’t healthy. She ended up essentially homeless, couch-surfing with friends.

She was sitting in a church service when it happened.

“All of a sudden, it was like liquid love going through me,” she says.

Suddenly, the words “Holy Spirit” – words she’d been saying and singing her whole life – meant something tangible. Something she could feel.

She said little, at first, not sure how to raise the subject with anyone else. But the Holy Spirit wouldn’t be put off. She would have the experience again – and the realization suddenly came over her, as she sat doing devotional reading, that Jesus was indeed the Messiah. (She laughs now, remembering the moment that moved her so profoundly that she ran out of the house and into the driveway and yelled to her sister, “Jesus is the Messiah!” – to which her sister, entirely unmoved by her revelation, responded, “Yeah, I know.”)

Her faith journey wasn’t linear. It wasn’t a sudden “a-ha!” moment that led to instant change. As life often does, it wandered; she believed yet resisted her faith at the same time.

In her personal life, Standerwick hit a dark point. She remembers lying on the bed one night, just asking God to let her die.

“I didn’t think I could even make it through the night,” she says. “The next day I woke up and all these miracles started happening.”

Some were small miracles.

Like the time she stood in the cereal aisle at Safeway, wanting to get a box of Cheerios but realizing they were $6 – money she didn’t have if she wanted enough for rent, and gas.

She remembers standing in the aisle, thinking about the Bible verse that says God will look after even the sparrows, and shaking her fist heavenward about the fact that in that moment He didn’t seem to be doing a very good job looking after her.

Then she got to the cash register, and the cashier offered her a scratch-and-win promotion card. Her prize? A box of Cheerios.

Other physical things came her way as she needed them – a dresser, a bed, a car.

Then there were the big things. The career-changing things.

She heard from a producer who’d come across her work while she was singing in the Metropolis at Metrotown Glee Club. They wanted her to record a song for the reopening of B.C. Place Stadium after its major renovations. Next thing she knew, she was singing at halftime for the B.C. Lions’ first home game in the newly renovated stadium – televised on TSN for millions of people to see.

“That was when I was going, ‘God, just show me what you want me to do,’” she recalls.

Other career-defining moments started to happen, too. She had a gig at the River Rock Casino, where she met Mike Reno, the lead singer of Loverboy; she wound up working with him on an as-yet unreleased rock album. At the River Rock she also came across Natalie Cole, who heard her sing and tweeted out about Standerwick being “the next Joan Jett.”

It was enough to erase her doubts. Music was what she was meant to be doing.

FROM ROCK TO GOSPEL

“At first I was afraid to start making Christian music,” she admits.

She was worried that her non-Christian friends wouldn’t understand or that she might alienate herself from the mainstream music industry.

That hasn’t happened. She has continued to perform as a rock singer for corporate cover bands, though she’s had to negotiate some instances of refusing to sing certain songs because the lyrics don’t reflect her values. (You Shook Me All Night Long and I Love Rock’n’Roll are two that came up recently.)

Now she’s focusing more of her attention on her journey as a Christian artist. A year ago, she started up a Song of the Week project on her Youtube channel.

The Christian songwriting project started as her musical way of tithing, she says; she had no money to offer the church, so she offered her music instead. Inspired by the biblical exhortation in Psalms to “Sing to the Lord a new song,” she writes and records a new song each week.

Her audience was small at first. Then one of her tunes, Gold, made it into a “Best Christian Songs of 2018” playlist, and suddenly a few hundred views became 500,000. A similar journey happened to a second song, and now her channel has about 800,000 views.

Her songs are now also finding a wider audience, courtesy of a producer she connected with through her work with Reno; Standerwick’s music is now included in a catalogue of music for film and TV use.

Thanks to that exposure, Standerwick is now working on a new Christian album.

She has also earned international attention through a Netherlands-based project called The Gospel of Dance, which works with producers and artists around the world to release Christian dance music. It was through her work with that group that she applied for the International Gospel Music Awards – which landed her on the red carpet in Atlanta in September.

“I think God’s doing something with the music,” she says with a smile.

Since the end of 2017, Standerwick has coped with some personal struggles.

She ended a longtime relationship – the same one that had been problematic for years – after they called off their wedding just two days before it was going to happen.

And her father, from whom she had been estranged in her self-described “selfish” years, got sick. Luckily, she says, she was able to move back in with her parents and be there for her dad’s final days.

“It was an amazing time of reconciliation,” she says. Had she not had that time, she says, she would always have regretted her relationship with her father.

She’s since used music to cope with her own feelings in the aftermath of her father’s death.

“It’s been cathartic writing these songs to deal through things, trying to build on the foundation of faith and knowing this world isn’t all there is,” she says.

Her music, she says, stems from both her own desire to worship and her desire to help other people worship and connect with God – and to help them focus on positive messages in a world that’s sometimes overwhelmed by darkness.

Having used cognitive behavioural therapy to deal with depression, Standerwick is interested in the ways in which a person’s thoughts can essentially hardwire the way their brain works. Keeping that in mind when she writes, she focuses her music on the messages she sees as being at the heart of Christianity: forgiveness, mercy, compassion - and, of course, love.

“I’ve been very passionate about putting these types of things into my music,” she says. “One of the big things I want to do with my music is for some day, for it to heal people. Right now, I am happy to have it psychologically heal people. …

“I’m hoping they will feel the Holy Spirit, and that will be something God can work through them.”

Though her music comes from a place of faith, she says listeners don’t have to be Christian to appreciate it.

“Non-Christian people really like the positive messages,” she says. “I would love it if other people, of all different walks of life, would enjoy the music and receive positive benefits from it.”

Sharing her music is a mission now because, she says, she can see how differently her life would have turned out if she hadn’t finally surrendered to God.

She looks back at the person she was 10 years ago and sees where she was stumbling.

“Every lack of self-discipline hurt myself, and it was all disguised as freedom,” she says. “I would not want to go back. When they talk about being, ‘I was blind but now I see,’ that was me. It was like a light bulb went on.”