Venture into the unknown with this modern Dracula adaptation

Fabulist Theatre is staging the classic story in the format of a live radio play, onstage Oct. 25 to 27 - and two Burnaby actors are part of the Halloween fun
Oct 18, 2019 9:06 AM By: Now Staff 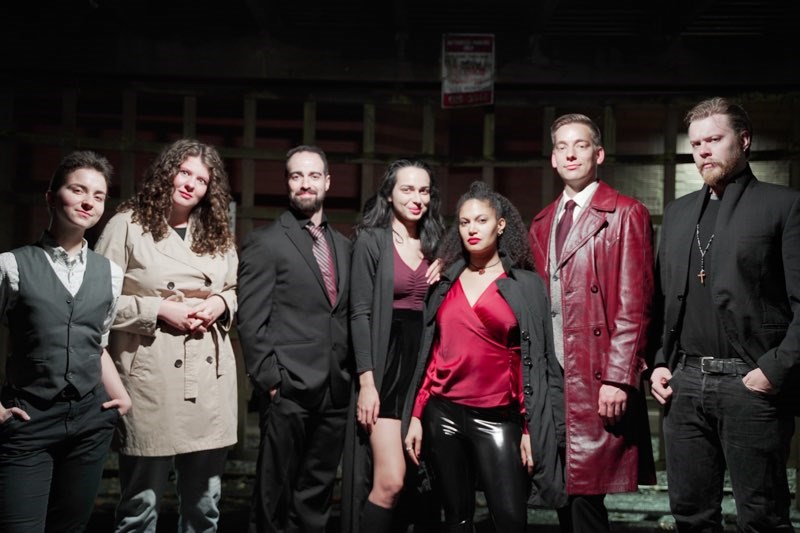 The cast of Fabulist Theatre's Dracula, onstage at CBC Studio 700 Oct. 25 to 27.contributed

Two Burnaby performers are onstage in a new modern adaptation of Dracula – just in time for Halloween.

Fabulist Theatre is bringing the classic story to the stage at CBC Studio 700 in Vancouver Oct. 25 to 27.

U.K. performer Adam Darts makes his writing debut with this contemporary adaptation in the style of a live radio play or “audio drama.”

The production stars Burnaby’s Steven Simpson as Harker, the investigative journalist who, with his fiancée Mina (Kathryn Robinson), has uncovered a bone-chilling story that tells of night stalkers, terrible illnesses and great beasts. Dispatched by his mysterious employer on a hunt for the truth, Harker journeys deep into the rural Carpathian mountains. There, with a group of deranged vampire hunters, Harker discovers he must thwart the source of the evil itself: Dracula.

A press release notes director Damon Bradley Jang loves the film noir genre and opted for a modern, neo-noir aesthetic for the soundscape and costumes.

(Note that the play is in the format of a radio drama only; it is being produced independently by Fabulist Theatre and will not in fact be broadcast.)

CBC Studio 700 is at 700 Hamilton St. Dracula is on Friday and Saturday at 8 p.m., and Saturday and Sunday at 2 p.m. Tickets for the show are $20, or $18 for students and seniors, available at the door or online at www.radiodracula.bpt.me.