All in the family at Sfinaki 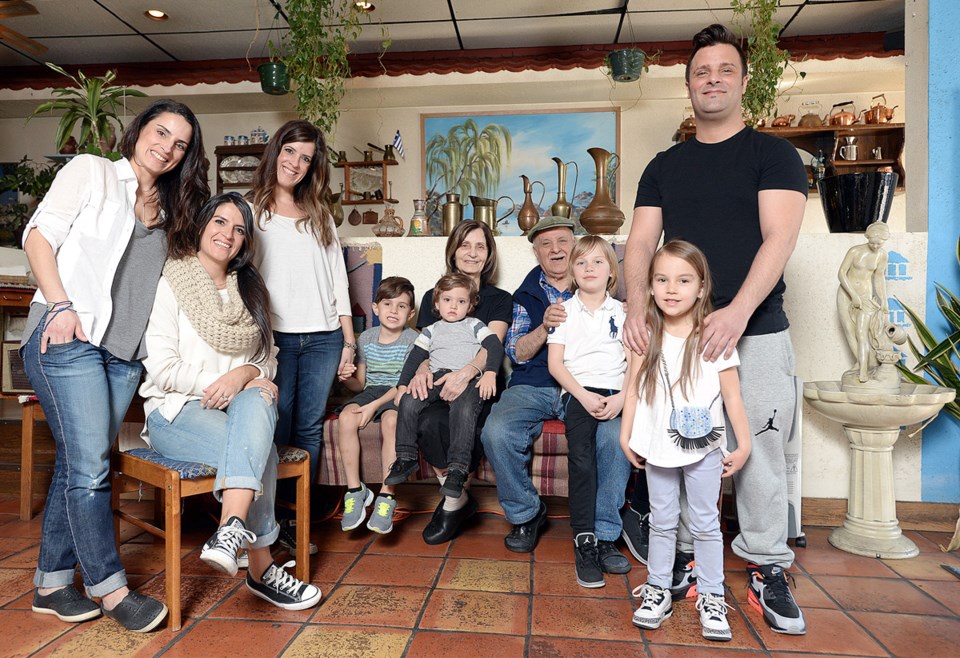 From left, Eva, Niki, and Bia, Ari, Maximo and Thanasi with Pam and Tom, and Denny with his niece Anika. Pam and Tom Karamessinis opened Sfinaki Greek Taverna in the Heights in December 1995 with their four children Eva, Niki, Bia and Denny. This year marks the restaurant's 20th anniversary.Jennifer Gauthier

Back when a loaf of bread and a dozen eggs would cost you about $2, Toy Story was the first and (only) fully computer generated feature film and Bill Copeland was mayor of Burnaby – the Karamessinis family was flirting with the idea of opening a Greek restaurant in the Heights.

In 1995, Tom Karamessinis and a business partner owned and operated a Greek restaurant in New Westminster that also served pastas, pizza and more, but Karamessinis and his wife Pam were looking for a change.

According to their kids Eva, Denny and Bia, the couple pitched the idea to their children, most of whom had graduated high school by then and were working odd jobs here and there. It was Karamessinis, who had owned a few restaurants in the Heights in the ’60s and ’70s, who suggested they open shop on Hastings Street.

“We didn’t really know too much about this neighbourhood,” Denny said. He was in Grade 9 when his family finally opened Sfinaki Greek Taverna at 4061 East Hastings St. in Burnaby.

Before the Heights became what Eva calls the Commercial Drive of Burnaby, it was a quiet neighbourhood with a few family-owned restaurants and delis here and there. When Sfinaki first opened on Dec. 1, 1995, business was slow and it was just the Karamessinis family working in the restaurant. Eva and her sisters would come in to waitress after work while Pam and her sister worked in the kitchen. Denny, who now manages the restaurant with his father, would help out after school, and Tom would do pretty much everything and anything to keep it all running smoothly.

“When we first opened, it was just us. There was nothing to really manage, it was just us. Yes, we had to manage the customers and all that other stuff, but it wasn’t like we had an overhead of people working here at that time,” Eva said.

Denny and his sisters joke that their parents were lucky to have a family big enough to run the restaurant. Even today, Eva, Bia, Niki and Denny still work regularly at Sfinaki, either serving customers or cooking in the back with their mother (yes, she and her husband still work there, too).

As business eventually picked up and word about the new Greek restaurant on Hastings Street spread across the Lower Mainland, the Karamessinis family hired some extra bodies to come in on busy nights – many of them are still working in the restaurant.

“We started out small and not very busy, and it took a few years for things to pump up and for us to get established and get our regular clientele and just become part of the neighbourhood,” Eva said.

Since then, Sfinaki hasn’t had a down year. The restaurant has had a steady amount of success throughout its 20 years and today, customers come from all over the Lower Mainland, including Burnaby, East Vancouver and the North Shore to enjoy the Karamessinises’ authentic Greek cooking – similar to what you’d find cooking at the Karamessinises’ backyard barbecues.

For the Karamessinis kids, the Heights has become a second home and now a first home for many – Denny, Niki and Bia all live in and around the Heights now. In fact, Karamessinis’s grandkids often mistake Sfinaki as his and Pam’s home, Bia laughed.

When asked what the future has in store for Sfinaki and the Karamessinis family, Denny said he hopes to see it stay open for years to come, and maybe even one day the next generation of Karamessinises will want to take it over.

For a full list of Heights merchants, visit www.burnabyheights.com.

Multiple COVID-19 exposure dates listed for Metropolis at Metrotown business
May 8, 2021 8:34 AM

North Burnaby just got its first great all-day breakfast spot
May 8, 2021 6:00 AM
Comments