For the early explorers of British Columbia, climbing Mystery Mountain was the adventure of a lifetime. But for a burgeoning land surveying company, it was all in a day's work.
Jan 27, 2014 3:30 PM By: Janaya Fuller-Evans 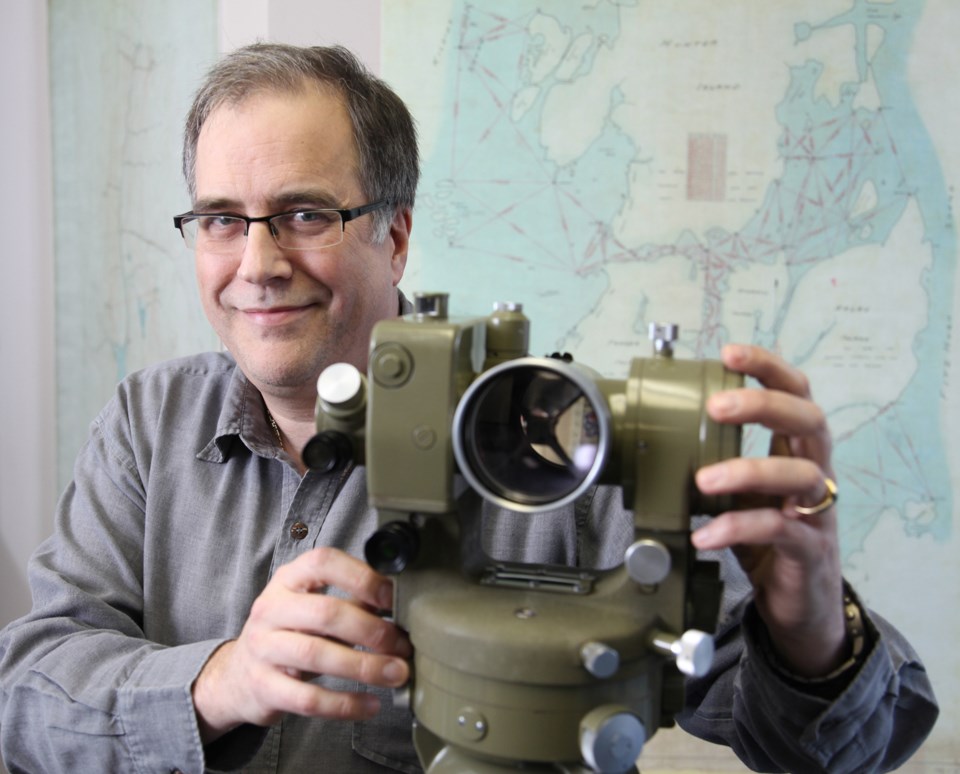 Surveying the past: Chris Cryderman, president of Underhill Geomatics Ltd., with some of the surveying equipment used by the Underhill group of companies in its 100-year history. Behind him, a map of the islands along B.C.'s coast mapped by the company - including Underhill Island, named by Jim Underhill.Jason Lang/BURNABY NOW

For the early explorers of British Columbia, climbing Mystery Mountain was the adventure of a lifetime.

But for a burgeoning land surveying company, it was all in a day's work.

Brothers Clare (who’s first name was Frederic, but who went by his middle name) and Jim Underhill started the Underhill and Underhill land-surveying firm in 1913, at a time when Western Canada was largely uncharted territory.

"I think the outdoors must've interested them a great deal, and surveying affords that kind of opportunity to work out in the wilderness," says Chris Cryderman, president of Underhill Geomatics Ltd., part of the Underhill group of companies.

In 1927, Jim was hired by the province to survey the area around Mystery Mountain - now known as Mount Waddington. At 13,186 feet, it is the tallest mountain within British Columbia.

"The government body at the time, the Surveyor General, basically said, 'tell us how high that mountain is,'" Cryderman says. "At that point, mountaineers are trying to find it, trying to get to it, it sounded like a great adventure. At the same time, this guy's just doing a surveying job on it."

Jim and his team were mentioned in The Unknown Mountain by Don Munday, who tried to climb the mountain and encountered the surveying team there, according to Cryderman.

"They were just miserable. They'd been working for months, they were starving to death, they've been picking up cigarette butts on the trail as they came out," he says. "So they were definitely different times than we deal with now."

Today, land surveyors with the company still head out into the Canadian wilderness, but the technology they take with them is much more advanced. It is something the company has prided itself on - keeping ahead of the technological curve.

In the 1920s, it was outboard motors for the boats they used, surveying up the coast. In the 1960s, it was equipment that measured distance electronically rather than manually - cutting project times drastically.

"Underhill was there - they were one of the first companies to have it," Cryderman says, adding the technology was used to measure major crossings such as the Ironworkers Memorial Bridge, the Port Mann Bridge and the Deas Island Tunnel. "The distances across those inlets were measured by Underhills because nobody else had it."

Today, the big technological advance is 3-D laser ranging and scanning, according to Cryderman, which can measure a million distances per second.

"It would cover this room in dots and basically, the room is done," he says, adding the technology was recently used to map the Holy Rosary Cathedral in Vancouver.

In recent years, the company has worked on everything from land surveys for land claims in Nunavut to infrastructure projects connected with the 2010 Vancouver Winter Olympics. And with the recent building boom in the region, Cryderman says, they're still busy.

Today, the head office is located in Burnaby, but Underhill also has offices in Kamloops and Whitehorse. Last year, the company celebrated 100 years in the business.

"In the surveying industry, there's a lot of companies that have made it to 100 years," Cryderman says. "For a small profession... there were four before us, at least."

Some of the first land surveying companies in the province started in the 1880s, he adds.

Despite the company's focus on modern advances, there is still a strong connection to the past, he says, adding Underhill has all of the early surveyors' field notes and plans on file.

"You'll occasionally come across the need to do a survey somewhere where one of the old guys, Clare or Jim, was there in 1920, and we'll have his notes," he says. "We go looking for his posts because he was the last person there."

For more information on the company, including a historical timeline, go to www.underhill.ca.