New aquarium store sets up shop in the Heights 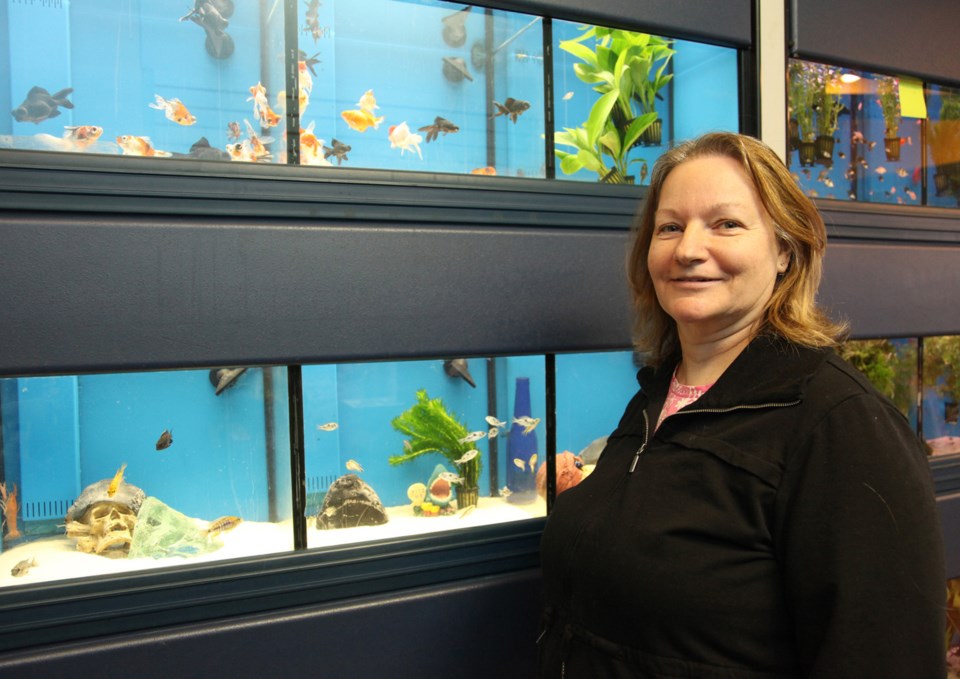 Just keep swimming: April Ross recently opened April’s Aquarium and Plants on Hastings Street near Gilmore Avenue. She’s been passionate about fish since she was 12 years old and is looking forward to sharing that passion in the Burnaby Heights neighbourhood.Jason Lang/BURNABY NOW

One fish, two fish, red fish, even blue fish can all be found in the well-stocked shelves at the new April’s Aquarium and Plants shop on Hastings Street.

Since April Ross was 12 years old, she’s had a fish tank to tend to at all times. Now she has a whole whack of tanks stacked neatly on a wall of her brand new store on Hastings Street and Gilmore Avenue.

“I like fiddling with the fish tanks and looking at the fish,” Ross told the NOW. “It’s an enjoyable thing.”

April’s Aquarium is a quaint new shop with a very blue theme. She opened her store’s doors at the beginning of February and has had a fun time getting to know her neighbours so far.

“They all came in to welcome me, all the different stores,” she said. “I’m really enjoying it. It’s quite a nice little area. It’s got a lot of nice stores, and it’s definitely an area that’s going to get more busy and busy. I like the idea of small individual stores rather than malls. It’s more personal. I think that’s the way.”

The love affair with fish started when Ross was still in elementary school, she got to take home some fish from her class one day, to add to her small fish bowl she had already.

“Then my aunt bought me my first tank and I was in love,” she said. “It was one of those old tanks with the silver edges, and from there I’ve never gone without a tank. I’ve moved lots of times, … but always had something going.”

But at April’s Aquarium, she also sells plants because of a connection with her mother.

“Many years ago, my mom and I used to go to the garden shops all the time,” she said. “I would take her all the time to garden shops. She’s gone now, and I figured I’ll carry on. It brightens up the place, makes it smell good.

“It looks bright and cheery and a lot of the seniors come by.”

Ross previously had a store on Dunbar Street in Vancouver for 30 years, which was a dog-grooming shop – but she sold fish, as well, for the past 10 years there.

“I have to do something until I’m 65 and once you’ve been an owner yourself, it’s harder to go back to the workforce and be an employee again,” she added. “I started looking at a few different areas. … I was really trying to target an area that needed a fish store.”

Looking for a change, Ross wanted to focus on selling fish in a neighbourhood that didn’t have an aquarium shop.

“I like all the fish,” she said. “And it’s almost like my little private spot where I can do everything I love.”

Ross’s store sells a vast array of fish, tanks, tank accessories and everything else someone would need – even aquatic plants.

“I think of all the pet industry, the aquarium has the most supplies you need to carry them,” she said. “Now, they even have little tanks (with) a USB port so you can plug in your lights and pump, everything, right from your computer.”

Since Ross had her first tank, home aquariums have changed with the times.

Ross said she’s had many hobbyists follow her from her Dunbar shop to Burnaby, as she’s still active on online forums.

“Many years ago, fish stores was more mom and pop shops, and then big box stores opened,” she said. “I think it’s going back to that. You have to know your fish.”

The big thing in the aquarium field now is having underwater plants with some small fish.

“A lot of the hobbyists, what they’re going for now is rather than the big tanks, a lot of them are going for the smaller, planted tanks,” she said. “It’s almost like a garden underwater. They have tiny little fish or shrimp and the driftwood, almost making like a landscape underwater. So I’m concentrating more on that.”

That’s also where the plants come in.

“So, you get your little landscape going, plants, CO2, and wood and things,” she added. “You start with a little tank and you get more and more.”

Ross said she tries to sell fish that will suit someone’s personal tastes and interests, including what tank the person might already have at home.

The new trend right now for fish hobbyists is rimless, curved tanks that can fit perfectly into a bookshelf.

Ask Ross anything about any fish swimming around in any one of her (about) 20 tanks, and her years of experience really become apparent.

“You start with one tank and then you want something different,” she said. “So, you get different kinds of things and then you add more. Some people can get over-obsessive, but it’s a particular personality.”

When you first enter Ross’s shop, and walk past the pleasant array of spring flowers, there’s a setup of different Betta fish, also known as Simaese fighting fish.

As for flowers, Ross says she’ll always try to stock long stem roses in blue, orange and yellow, orchids, tulips and pansies, among others.

There hasn’t been a specialty fish store on the Heights for a very long time, and Ross says she hopes to thrive on the Heights while sharing her love of fish with others.

“A lot of people who get in the hobby start when they’re about 10 to 12 years old,” she said. “It’s really good for the young kids, who are quieter. Scientific, quiet kids. It’s good for kids. It gives them a hobby that’s theirs.”

Ross said she’s happy to be back in the Heights, as well, after first living in the area when her children were very young. Now, she lives in Port Moody.

“There’s always the joke among hobbyists, is they have multiple tank syndrome,” Ross noted.

At home, Ross said she only has one tank at the moment.

“I don’t really need many at home because this is my playground,” she added. “And the flowers are really something I added to survive in the pet industry. You need something to supplement.”