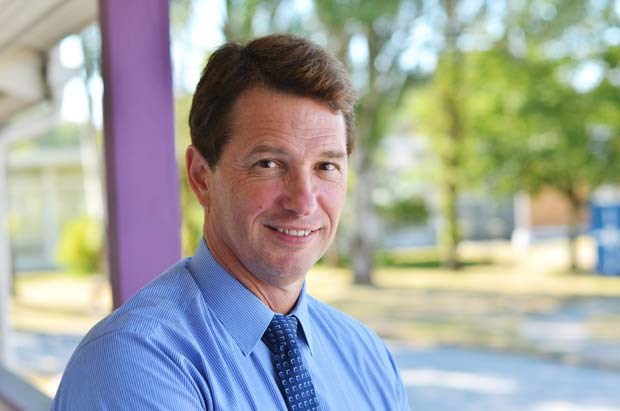 To the future: Neil Moody is the new CEO of the Canadian Home Builders' Association of B.C. Moody expects there are some changes on the horizon for B.C as home-builders shift to smaller, denser developments similar to those found overseas.Larry Wright/BURNABY NOW

The Burnaby-based Canadian Home Builders' Association of B.C. has a new leader, and he comes with a world of experience.

Neil Moody started as the CEO of the Canadian Home Builders' Association of B.C. on Aug. 1 and said he brings an entrepreneurial and association background to the table.

"I'm an entrepreneur," Moody told the Burnaby NOW. "I started a housebuilding company ... and as a contractor (I) just made sure everything

came together and the numbers worked."

Moody first got a taste of building when he was 14 years old and decided he was going to build a tree house - but it went above and beyond some planks nailed to branches a few feet in the air.

"I built this tree house that had quite the reputation in the neighbourhood," Moody said. "You know what most tree houses are like, but this one had two by four walls, it had cedar siding on the side with full-frame windows. It had a sun deck, I had gyprock on the inside, and it was all insulated. I had shag carpet, and I had wallpaper on the inside."

It got to a point where Moody started to get teased when Lumberland would start making product deliveries to his house for his backyard development.

"I grew up in an area where they were building lots of new homes," he added. "That's where I put my energy when I started, when I was about 14. I guess that was the genesis of that."

Moody grew up on the North Shore, and by the end of high school, he was selling furniture and taking orders for more out of his woodworking class.

"When I graduated in Grade 12, they gave me the golden hammer's award," he noted.

After high school, Moody attended the University of British Columbia and Simon

Fraser University. Following his education, Moody was busy growing his house building company, and when he sold it, he decided to take a six-month trip to Japan, which, in the end, lasted about 20 years.

"I originally, like many people, went for only six months," he said. "I sold my business and went for a six-month holiday that turned into ... 20 years."

Moody spent 14 years working with associations in Japan, including the Canadian Chamber of Commerce in Tokyo. He spent time representing the Canadian business community internationally, which often included the home building sector.

Since moving back, Moody said it's interesting how the house trends here will soon emulate Japan's as the push for smaller homes becomes more evident.

"It's a North American phenomenon where you have these large homes because we've got the land," he said. "But as everyone knows, land is so expensive now, and how are you going to deal with that to make it more affordable for consumers? Well, one way is to perhaps build smaller homes. With that comes new ideas."

Moody points to some of the advancement the Japanese have made when it comes to making the most out of a small space.

"They make such great use of the space of the housing over there," he said. "Probably a lot of those (ideas) can be implemented into building here."

Moody said he's also going to continue to work on what the association has been trying to do for a long time, and that is getting all builders in Canada licensed. "We want to make sure builders are licensed, and that's why we have the education and training," he said. "Would you want to live in a house in an earthquake area that wasn't built by a professional, certified builder?" Moody comes at an interesting time in the builders' market as emerging trends include smaller, more affordable units, a rise in secondary suites within single-family dwellings, which Burnaby is looking into legalizing, and empty nesters who are downsizing and relocating to smaller homes often outside the Lower Mainland.

There's also the push for transit-oriented development, and much of that is happening in Burnaby as the areas around Brentwood, Lougheed and Metrotown malls are getting more densified and redeveloped.

Moody took over from M.J. Whitemarsh who led the association for 13 years.

"I'm pleased to be working with Neil during the current transition period," Whitemarsh said in the release.

Before Moody was brought on board, Burnaby's Brian Bonney was named CEO of the association but resigned before he could start, following the B.C. Liberals ethnic vote scandal in March. The Dyble report, released on March 14, found Bonney had misused government resources while working for the Multiculturalism Ministry.

Larry Wright, Burnaby Now / To the future: Neil Moody is the new CEO of the Canadian Home Builders' Association of B.C. Moody expects there are some changes on the horizon for B.C as home-builders shift to smaller, denser developments similar to those found overseas.;

Burnaby’s Asian grocery stores battle it out to lure back customers amid COVID-19
May 15, 2021 6:33 AM
Comments