Steamworks is taking its canning game to the next level with new, state-of-the-art equipment
Apr 13, 2018 1:18 PM By: Cayley Dobie 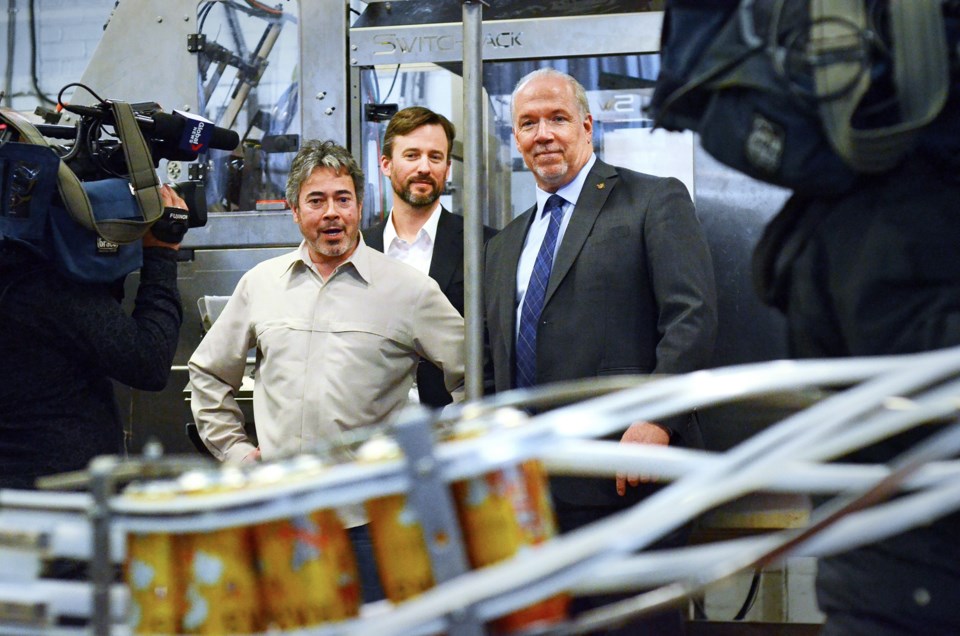 Steamworks CEO Eli Gershkovitch, left, with Premier John Horgan during a recent visit to the brewery. Steamworks recently upgraded its canning line to increase productivity. The new line can now can 15,000 cans in an hour – 10 times the number of cans of the old line, according to Gershkovitch.Cornelia Naylor

A Burnaby craft brewery is pumping out more beer than ever after installing a “state-of-the-art” canning line.

Steamworks Brewery recently upgraded its canning line at its Burnaby facility. The new machinery can produce 15,000 cans of beer per hour – 10 times the number of cans Steamworks’ old line could fill, according to CEO Eli Gershkovitch.

“We’ve found that more and more of the market is moving towards cans. It’s an interesting trend,” he told the NOW. “We really need to get higher speeds in order to keep up.”

Steamworks’ old canning equipment produced about 1,500 cans an hour, which wasn’t sufficient, according to Gershkovitch.

“It’s a nice problem to have that we’ve outgrown our original canning line,” he said.

Steamworks has been canning some of its beers almost since it opened its Burnaby facility in November 2013. Currently, it puts out about a dozen beers – give or take a few depending on the season and what speciality brews they’ve got going – and, of those beers, more than half are available in cans. The company also exports a lot of its canned products, Gershkovitch said.

“In the U.S., we’re exporting exclusively cans, same with Ontario,” he said.

Last month, Premier John Horgan and Burnaby North MLA Janet Routledge stopped by the brewery to check out the new equipment in action. (Media were invited on the tour but weren’t allowed to ask the premier questions.)

Gershkovitch said the new line, while helping to boost the company’s production, also frees up time for his staff.

“I want my brewers to be focused on the finer aspects of brewing rather than having to actuate a pump or open and close a valve,” he added.

With the new canning line in operation and orders for Steamworks’ beers increasing from all corners of the world (they’re popular in Europe, too), it’s possible that one day, they might outgrow the William Street facility – but that’s not something Gershkovitch is too concerned with just yet.

“We’re very happy in this facility,” he said. “By being … resourceful, in terms of our planning, it’s our intention to be part of the Burnaby community for a long time.”

Steamworks’ Burnaby brewery is located at 3845 William St. The taproom is open Sunday to Wednesday from noon to 10 p.m. and Thursday to Saturday from noon to 11 p.m. For more info, go to www.steamworks.com/brewery.