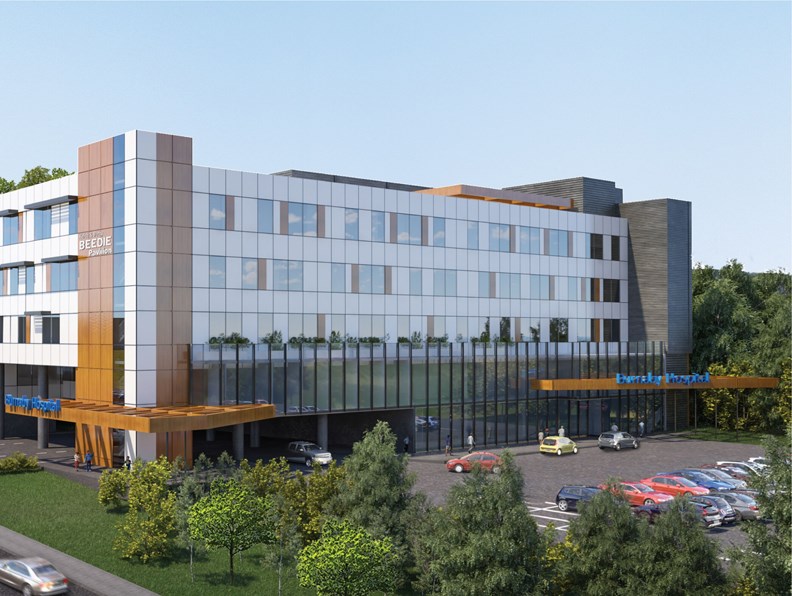 Burnaby Hospital Foundation has launched a $30-million fundraising campaign, to go towards Phase One of the redevelopment of Burnaby Hospital.Contributed

Burnaby Hospital Foundation is launching its most ambitious fundraising campaign to date, with the help of a prominent Burnaby family.
The Proud History, Bright Future campaign aims to raise $30 million in the next one to two years.
The Beedie family, which established the well-known real estate company Beedie Development Group, is donating $8 million towards the campaign.
“We have very deep roots here,” Ryan Beedie said at the campaign announcement. “I was born in this hospital in 1968 and our office is just down the street. Our company has been in Burnaby for 66 years now and will be for the foreseeable future.”
The Beedie family sees the hospital, which was built in 1952, as a priority for the community, as well as for them personally, Beedie said.
“It’s long overdue,” Beedie told the NOW, adding the last major update to the hospital was decades ago. “It’s keenly needed in this community. It cannot happen soon enough.”
The $30 million will go towards Phase One of the hospital redevelopment, which will include the Keith and Betty Beedie Pavilion, named for Ryan’s parents. Keith, who passed away in 2017, was a big supporter of the hospital. In the past, the family donated more than $2 million toward the facility.
The Burnaby Hospital is taking a community-minded approach to fundraising for the campaign, according to Kristy James, the foundation’s CEO.
“We have a very supportive community,” she said, adding the campaign will take a lot of work.


“Finally now, after years of advocating and waiting, we’re on the verge of a brighter future in healthcare for all of us,” James said at the announcement.
Mayor Mike Hurley thanked the Beedies for their contribution.
“I believe that we all have a duty to lift someone up when we have the chance to do so,” he said regarding the Beedies’ donation. “You’ve lifted our whole community up and I think that’s something really very special.”
Construction on Phase One is expected to begin next year. The first phase of the redevelopment project is expected to cost about $550 million.
Phase One is a six-story, 11,858-square-foot tower with 78 beds, and includes the hospital’s maternity and new born services as well as a unit for adults with mental health and substance use concerns.
The patient rooms are all single rooms with their own bathroom.
The facilities support building will be extended and renovated, and increased parking is also included in Phase One.
The total budget for the hospital’s redevelopment is $1.3 billion.