B.C.’s education minister was in Burnaby Friday to announce $350,000 in funding to enhance sexual orientation and gender identity (SOGI) education around the province.
Sep 7, 2019 9:06 AM By: Cornelia Naylor 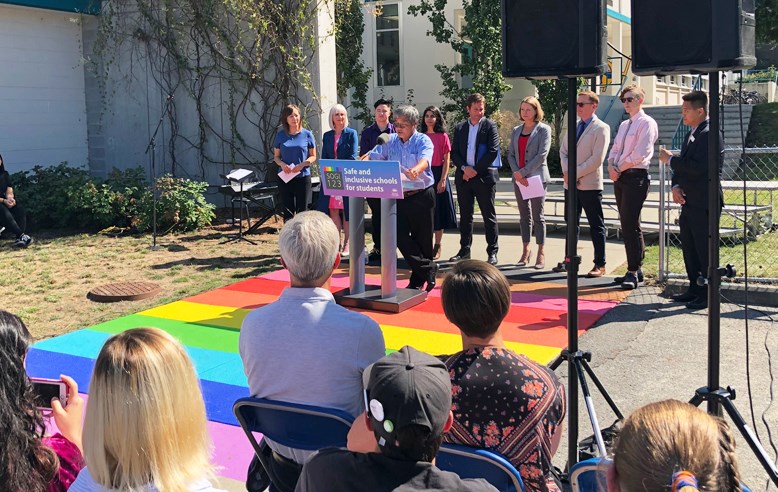 B.C.’s education minister was in Burnaby Friday to announce $350,000 in funding to enhance sexual orientation and gender identity (SOGI) education around the province.

Rob Fleming was at Cariboo Hill Secondary School – the site of a brand new rainbow sidewalk – with Mitzi Dean, the province’s parliamentary secretary for gender equity, and local school officials.

The funding Fleming announced will be used to hire a new provincial SOGI lead, who will provide training, resources and supports to school districts and independent schools, according to a press release.

Some of the new funds will also be used to expand the annual SOGI Education Summit, organized by the education ministry and the ARC Foundation, the organization that developed the province’s SOGI 1 2 3 resource, designed to make schools inclusive and safe for students of all sexual orientations and gender identities.

The yearly summit sees public and independent school members of the B.C. SOGI Educator Network meet to learn about new approaches and resources, to share successes and challenges and to provide input to inform provincial initiatives.

The next summit, in Richmond in October, will integrate student and Indigenous perspective, according to the announcement Friday.

The Burnaby district was a fitting place to make the announcement, according to school board chair Gary Wong, given the local school district’s longstanding commitment to LGBTQ inclusion.

The board adopted a SOGI-specific code of conduct policy almost five years before they became mandatory in September 2016.

“We are one of the early leaders among school districts with SOGI in education,” Wong said, “so we were pleased to be chosen to host this provincial announcement. We have long celebrated and cultivated a culture of respect and belonging in our schools.”