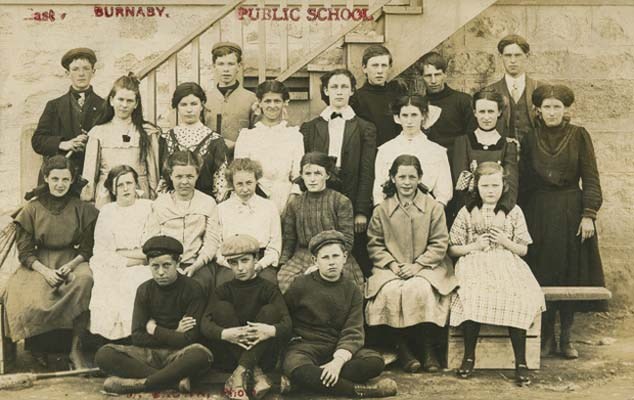 If you want a history of your city's schools, there are some serious advantages to having retired teachers write it, according to City of Burnaby heritage planner Lisa Codd.

Take Inkwells to Internet: A History of Burnaby Schools, a 15-year project that should be out this fall.

“Because they’re all retired teachers, they’ve gone out into their networks, and they’ve gathered all of these stories from teachers and administrators and other people who worked in the schools, and photographs right out of people’s photo albums,” Codd said. “If you or I went to write this book, this is not the kind of stuff we would have access to.”

The project was first launched in 2004 by Janet White, a former student, teacher and parent in the district.

She has since been joined by other volunteers on the Burnaby school history book committee, currently made up of Rosemary Cooke, Gail Yip, Harry Pride and Dave Carter.

When White first pitched the idea to the Burnaby school board in October 2005, it was for a modest, coil-bound booklet printed at the district’s own print shop in time to mark the 100th anniversary of the city’s first school board in 2006.

Back then it was only going to be a history of the school buildings, according to White.

It has since morphed into a complete 500-page chronicle, filled with hundreds of photos and stories about every school in the city – including some that don’t exist anymore.

“It’s going to be a beautiful book,” White said. “It was wonderful researching the stories.”

Of course, embedded in the school stories is the story of the city as a whole.

One thing that stuck out to Codd, for example, is the sheer magnitude of the postwar Baby Boom, and its impact on the local school system.

Clinton School – opened in 1948 with fancy modern features like fluorescent lighting – is a good illustration of how that population explosion played out at local schools.

Clinton opened with 235 students and reached a peak enrolment of 720 in 1961, sparking the need for three additions in less than a decade and forcing students to go to school in shifts.

Naturally, Inkwells to Internet also shows how much the world of education has changed as well.

Codd points to a story in the book about Minnie Scott, a stern Irish woman and Burnaby’s only female principal at the time, who was said to rule Capitol Hill School with a rod of iron – and the occasional application of the strap.

Not all parents appreciated her methods, though, including one mom whose son had been strapped. The woman reportedly marched to the school brandishing a razor strop, threatening to “see how Mrs. Scott would like getting the strap.”

“That would have been my mom,” Codd said. “That anecdote shows there was resistance to the strap – just because it happened didn’t mean everyone bought in.”

According to a recent report to city council, the committee has finished writing, editing and selecting photos for Inkwells to Internet.

Graphic design is now in progress, and the book should be ready for distribution in the fall, according to Codd.

By the time it’s printed, it will have cost about $10,000, according to the report, with the city and school district each picking up half the bill.

The city will also spend about $4,000 to digitize the book in order to make it available online at the Heritage Burnaby website.

Only 187 copies will be printed.

The rest of the books will be distributed free of charge to local schools and libraries, as well as a number of city and school district departments.

The retired teachers who worked on the book will also get a complimentary copy.