A new vision for musical theatre

It may not be every day that a musical theatre producer chooses to quote Yoda to make a point, but Aaron Lau can't help himself.
Feb 8, 2012 2:00 AM By: Julie Maclellan 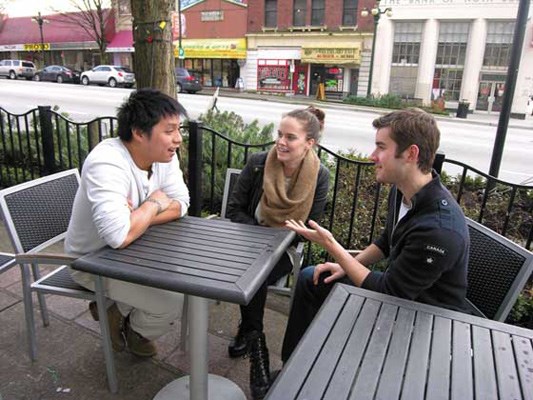 It may not be every day that a musical theatre producer chooses to quote Yoda to make a point, but Aaron Lau can't help himself.

He has a favourite quote about his approach to life these days, and it happens to come from the Star Wars Jedi master: "Do, or do not. There is no try."

He laughs as he says it, chat-ting over coffee about his new theatre company, Intimate Theatre Productions.

But the 29-year-old Burnaby resident is living the philosophy every day.

"You've gotta go in both feet," he says with a grin.

That's the philosophy that's driving Lau through some pretty long hours these days, as opening night of I Love You Because - Intimate Theatre's inaugural production - approaches.

I Love You Because tells the story of an uptight greeting card writer, Austin (played by Sayer Roberts), who meets a flighty, free-spirited photographer, Marcy (played by Erin Palm) on a blind date.

With the help of Austin's brother, Jeff (Victor Hunter) and Marcy's best friend, Diana (Harper Smith), along with a few of the neighbourhood locals

(Sheryl Anne McMillan and Lau himself), the two discover that they love each other not in spite of their differences but because of them.

"It's a very endearing roman-tic comedy, with an emphasis on the romance part," explains Lau.

The musical, with music by Joshua Salzman and book and lyrics by Ryan Cunningham, fits in with Lau's vision for his company: to produce contemporary, small-cast productions that aren't often seen on stage in an era of bigger-is-better musical theatre.

It was a vision that Lau conceived a few ago, while working on West Side Story with Royal City Musical Theatre and talking to artistic director Lloyd Nicholson about how most musical theatre seen on stage around the region is by large companies with large casts.

"We were talking about how there are so many of these small-casted shows that are never done," Lau explains.

The idea remained with Lau, but it wasn't until Nicholson passed away unexpectedly in October 2009 that Lau felt compelled to move forward with it.

He admits he wasn't quite pre-pared for the amount of work involved in setting up a new theatre company.

"They tell us about it in theatre school, but it's not until you physically get your hands on it that one realizes how much work goes into it," says the Capilano University theatre grad.

Lau says his journey has been helped immeasurably by working with Shel Piercy, whom he knows from previous experience with Theatre Under the Stars.

Piercy is now directing I Love You Because.

"He's really been essential as a mentor," Lau says, noting it's been invaluable to get advice and assistance from someone with more than 20 years in the industry. "Any insight and advice he has, I can't take with a grain of salt."

With his help, Lau says, setting up Intimate Theatre Productions and getting the inaugural show off the ground became just that much easier.

Finding other experienced professionals to serve on the creative team - among them associate producer Chris Adams and music director Kerry O'Donovan - has also been key.

Lau admits the process hasn't been with-out its hassles.

His first two show choices - first John & Jen, then Nunsense -were derailed when other theatre groups opted to stage them first. Lau points out that there seems to be a lot of overlap in the musical theatre community - recent years have seen repeat performances of The Wizard of Oz, Joseph and the Amazing Technicolor Dreamcoat, and Annie by various theatre groups - but he was determined to find a show that was unique and hadn't been seen before.

He found the script for I Love You Because through a cast member with Theatre Under the Stars in the summer, who brought it to Piercy.

When Piercy liked it, Lau felt good about choosing it.

"The music is contemporary, but the lyrics have an old-style construction," he says, noting that though the themes are modern, they still carry a classic Broadway style. "The story itself is such a well-written show."

Once the show was chosen, the inaugural production was originally expected to be in October. It got delayed by a number of setbacks, including the search for a music director and the loss of a cast member who dropped out shortly before rehearsals were to begin.

But now that Lau is everso-close to opening night, he couldn't be happier with the way it's turning out.

He's thrilled with the cast they've assembled for the musical. He has previous ties to just about everyone through school, previous musical theatre performances or other projects - such as the Metropolis Glee Club, in which he sang with Roberts last year, and the Vancouver Bach Choir's youth choir, in which he used to sing with Palm.

"Everything's about two degrees of separation," Lau says with a laugh.

He's pleased, too, that he gets to share the stage with them.

He's quick to note he didn't want the show to become a "vanity project," and he auditioned like every other cast member.

He's enjoying the chance to both perform and produce - even though it means he spends a lot of his spare time at rehearsals on his laptop, sending emails and Facebooking to let people know about the upcoming show.

"The fact that I get to do both is a godsend," he says.

And Lau is already thinking ahead to what he'd like to see Intimate Theatre Productions become.

"I want to take this, and I want to make it one of the steady companies," he said, noting he envisions a future of regular productions not just in Vancouver, but hopefully elsewhere in Canada and the U.S. as well. "I don't want to just stop here."

The Valentine's Day show - a special Tuesday night show - will include complimentary refreshments and a rose for each woman in the audience.

For more, see www.intimate theatreproductions.com or search for Intimate Theatre Productions on Facebook.

What: I Love You Because, presented by Intimate Theatre Productions