A small group of anti-poverty activists gathered in Burnaby’s Metrotown area to push back against demovictions they say are leaving local residents homeless.
Oct 3, 2016 3:32 PM By: Jennifer Moreau 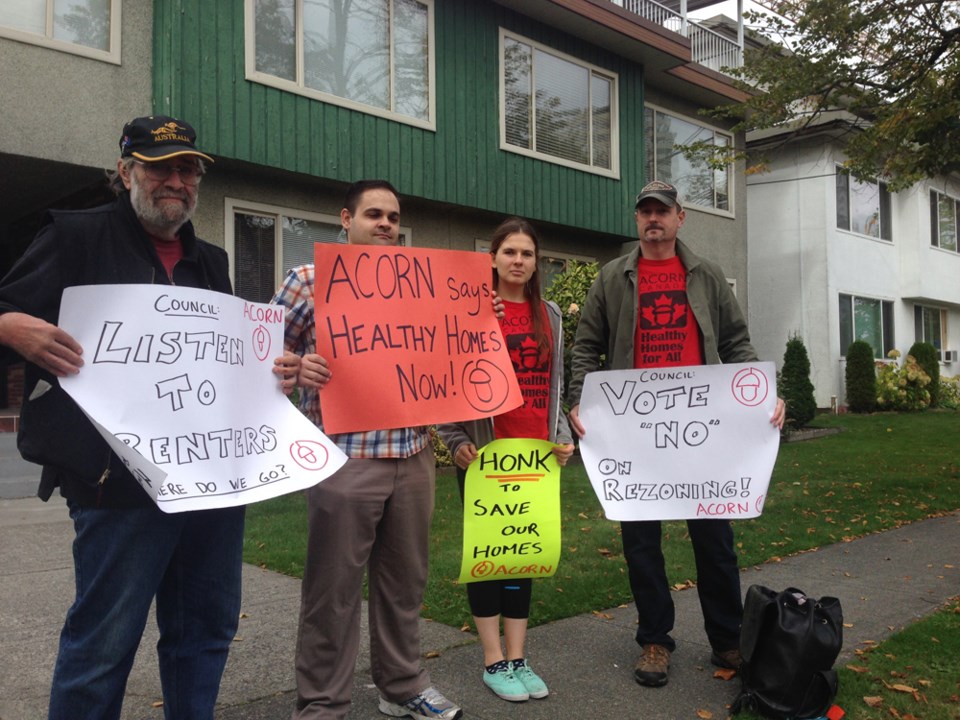 A small group of anti-poverty activists gathered in Burnaby’s Metrotown area to push back against demovictions they say are leaving local residents homeless.

They came out Monday, the same day Burnaby city council is scheduled for the second reading on a controversial development project in the neighbourhood.

“I really hope the city councillors and the mayor start to realize the human costs of these demovic-tions,” said Murray Martin, an ACORN member and Edmonds resident.  “There’s a zero per cent va-cancy rate from here to Abbotsford. Every time you tear down one of these buildings, there’s no-where to go. … The destruction of these buildings will result in homelessness.”

City council is set to hold the second reading for a rezoning application that would involve tearing down several apartment buildings with low rental rates. The developer, Polygon, is planning a 38-storey tower. Polygon has already sold out a neighbouring “sister” highrise that hasn’t been built yet.

Martin claims he knows demovicted residents who are now homeless – some are couchsurfing, and one man is living on the streets. They were all residents of 5025 Imperial St., the building that was occupied by protesters in July. Amacon, the developer, is planning a 27-tower highrise for the site.

(Note: The earlier web version of this story said the building planned for 5025 Imperial St. was 26 storeys - it's actually 27. We apologize for the error.)