It was like a scene out of Law and Order . Some 15 bodies lay near the Production Way SkyTrain station on Monday morning. Seven people in hazmat suits arrived at the scene, checking each individual for a pulse.
Oct 23, 2017 3:54 PM By: Tereza Verenca 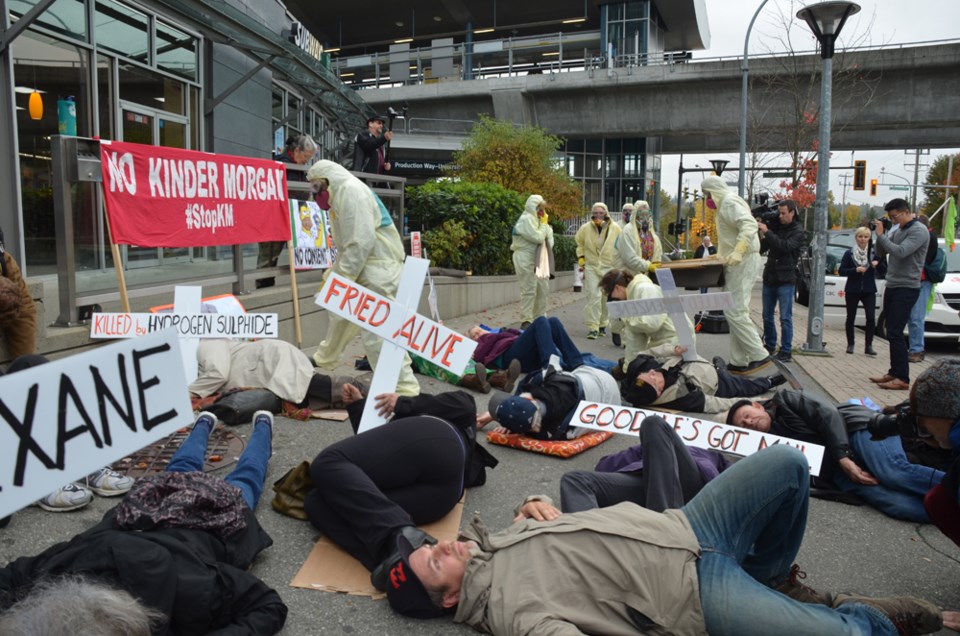 Members of BROKE staged a 'die-in' on Monday morning, protesting the expansion of the Kinder Morgan's tank farm on Burnaby Mountain.Tereza Verenca

It was like a scene out of Law and Order.

Some 15 bodies lay near the Production Way SkyTrain station on Monday morning.

Seven people in hazmat suits arrived at the scene, checking each individual for a pulse. They carried stretchers and hauled the bodies off one by one.

It started with an air siren, indicating that Kinder Morgan’s tank farm had exploded. Several people subsequently “died” on the spot.

The goal was to get the attention of Ralph Goodale, Canada’s public safety minister, and let him know the risks of expanding the tank farm are too great, according to one organizer.

“This is a densely populated area; there are thousands of people living on Burnaby Mountain. Basically, the only emergency response plan is for them to shelter in place,” said Ruth Walmsley with BROKE. “There could be plumes of highly toxic smoke and there’s only two roads coming down from Simon Fraser, and they intersect very close to the tank farm. They would basically be trapped up there – thousands of people – and that’s unacceptable.”

Besides twinning the existing pipeline between Edmonton and Burnaby, Kinder Morgan’s $7.4-billion Trans Mountain project will see an additional 14 new tanks built on Burnaby Mountain, bringing the total number of tanks to 26.

In their demonstration, the anti-pipeline activists referred to a 2015 report published by the Burnaby Fire Department. The document analyzes the fire and safety risks and consequences associated with adding more units, and concludes the tank farm should not be expanded.

The document, which outlines a number of worst-case scenarios for the Burnaby Mountain facility, states the expansion “poses significant constraints.”

Those include: the safety of firefighters and effectiveness to combat fire; containment and extinguishment of fire/spill/release; evacuation of employees within the Burnaby Mountain terminal facility; and the evacuation of adjacent neighbourhoods.

The activists called on Goodale to conduct “a thorough public safety analysis” of the tank farm expansion; coordinate an emergency evacuation and response strategy with the Burnaby Fire Department, Burnaby RCMP, Kinder Morgan, SFU and other “high-life risk areas” in the community; and produce a report, showing how Public Safety Canada intends to address the worst-case scenarios.

He was met with a locked door.

After a few knocks and no response, Perrin slid the letter under the door.

The NOW put in a request for comment to Goodale’s ministry, but was redirected to Natural Resources Canada.

In an emailed statement, communications officer Jocelyn Argibay wrote: "The decision we took on the Trans Mountain expansion project was based on facts, evidence and what was in the national interest. We embrace a diversity of views and opinions with respect to Canada's energy future and encourage people to express their views peacefully and in accordance with the law. We would not have approved these projects if they were not in national interest. The right to peaceful protest lays at the foundation of our rights and freedoms and our government respects that right. The project is subject to 157 legally binding conditions designed to ensure the project is built and operated in the safest and most sustainable way possible."